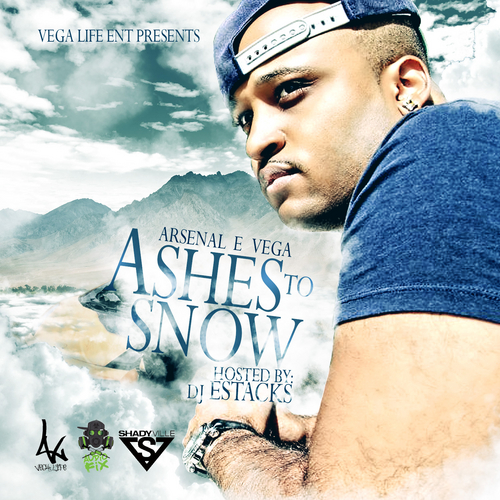 Well…you got me. I’ve searched my brain for a reference and come back with nothing – so we’ll have to officially call this the first mixtape OR album that I’ve ever heard begin with Dolby Sound.

Welcome to the musical world of Arsenal E’ Vega…filled with all of the things you need to put a good mixtape together; flow, creativity, diverse samples and hooks to make the people come back for more. Often referred to as AR through the lyrics, Arsenal E’ Vega has put the work into this mixtape to make it run from one side to the other and stay entertaining throughout.

As far as I can research, that should be the case…this isn’t AR’s first musical-mixtape-rodeo…know what I’m sayin? It’s the consistency in his work and sound…that real feeling that this music was meant to be played together is what makes this mixtape work as well as it does. “Make It Vibe,” is a perfect track to point to in order to illustrate what AR’s capable of…so throw that on…

But for fans of the mixtape format…fans of dirty, low-ridin, back-alley-beats…you can’t ask for much more than what Arsenal has done on “Make It Vibe.” Using wickedly edited samples, guest vocals and an undeniable beat, AR stays on-point throughout this track and remains that way throughout the album. Immediately into a brilliant track called “Tree Of Life,” a song that makes the absolute maximum out of an incredible background. Another incredible sample, a rap-flow that definitely hooks you in, and a subtle bass-line that is the absolute icing on the cake of this track.

“Tree Of Life” really gives you a great idea of how AR approaches the mic. There’s a thought-out and deliberate flow…there’s some true storytelling ability here, again – undeniable on this track. Heading into a guaranteed hit on “Turnt Up,” halfway through this mixtape and you get a real appreciation for the layout, mastery and care that has been put into Ashes To Snow. The energy on this album has organic life to it…and much like the deep swelling bass you’ll find throughout the album, this entire mixtape almost breathes along with you…like you’re living it with your homie E’Vega.

“Lords Of The Underground” highlights a lot of what I like about Arsenal E’ Vega’s style in particular. His sly and well-spread out flow really uses the space of the music well…he’s got a great sense of timing and where exactly to be involved in the track. As a result – the listener is in for something that doesn’t always come easy when spitting out a million words per verse – we can HEAR them. Word-for-word, this rap flows smoothly throughout and you can really find yourself getting into the stories that AR weaves throughout these musical tapestries.

But whoever out there is responsible for the dude on the sidelines that gets to shout “REMIX” or “2000-WHATEVER-YEAR-IT-IS,” “NEW SHIIIIIIIIIIIIIIIIIT” – you know what I’m talking about…that guy that somehow convinced the entire room that YES…it’s a FANTASTIC IDEA TO MAKE ME TEN TIMES LOUDER THAN THE REST OF THE TRACK…well…whoever that is, consider yourself warned because I AM coming…to punch you squarely in the face….you owe me a new pair of headphones!

Like I was saying…not a slam against Arsenal here, just picking on the genre itself…or again, maybe just showing the early signs of aging…

Ending on strong tracks “Greed Is Good” and “Teenage Crime” puts the final punctuation in perfect place once again on Ashes To Snow. Arguably two of the best tracks on the mix – AR goes out on the right note here – the one that makes you want to repeat it all over again. With this album swelling and building the way it does – but never bursting through that smooth feel, Arsenal E’ Vega has found a sound well-contained and original to himself. Ashes To Snow has plenty of flavor for any listener to get down on.