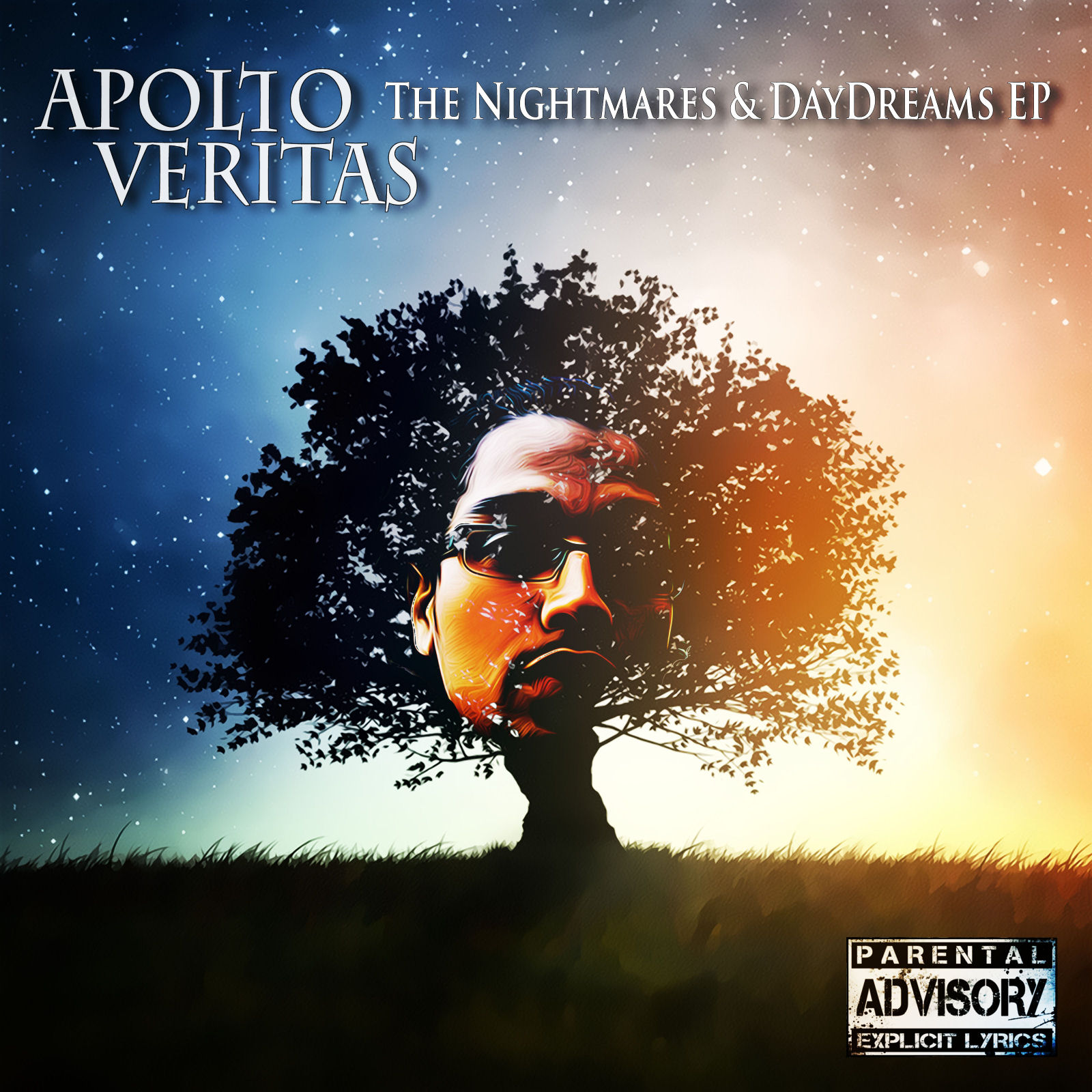 There is one wicked fire burning inside of this emcee…one that definitely understands the art of ‘the hook’ and how to use it effectively. Apollo Veritas is definitely the kind of Hip-Hop/Rap that I look forward to – innovative beats, fresh rhymes…and you know…skills that would put other rappers into retirement or straight into the dirt…I’m not asking for much. That’s the beauty in what I’m listening to on The Nightmares & Daydreams EP – it has all of this and more…with big-beats & style for miles.

First of all…the way Apollo raps is straight-sick as it gets; his tone is menacing and full of mischief & mayhem – and you know I dig that. Even though you might think it a little odd to start off an auditory experience with “Viewer Discretion” – just because we can’t see him doesn’t mean he’s not killin’ it straight off the bat in this first cut. Against the grain of a jazzy-loop, Apollo works straight magic on the mic as the verse kicks in; the chorus is like a hypnotic vocal-loop that feels like it’s almost scratched straight-off a record. It’s a smart track just as much as a smart-ass track – there’s as much humour as there is skill on “Viewer Discretion” – and of course that gives us some pretty damn solid insight into the man behind the music and what he’s all about. Roaming through social commentary and putting complex rhyme-to-complex rhyme – Apollo Veritas hits as hard as Apollo Creed on his opening track and verbally jabs the planet at the beginning of The Nightmares & Daydreams EP.

Hold up a minute homie…did you just take a time-out to name-check the illustrious Rob Ford?

It gets THAT real…right away…and the EP doesn’t let up for a single moment. I can let you in on this in advance…’cause I’ve heard it several times now…and let me say – you’re about to become ridiculously impressed with the level of talent in this Hip-Hop mogul. With assistance from homies Iso &HiMarz – “Wadup” is just about as strong as a track can get…no JOKE the rap is insane! Apollo even mentions having a gas tank on him in the opening-verse…and it sounds like he’s got the foot to the floor as he comes ripping straight off-the-line from 0-100mph verbally attempting to break the sound-barrier. Precision-flow in the verse from Apollo…Iso holds it down with supreme style & swag…and just when you think it can’t get any better – HiMarz comes in for one of the best verses you’ll hear this year. Think about where we’re at in the year…it’s MID-DECEMBER…and I’m tellin ya…IT’S THAT GOOD! These three combine for one absolutely monster-cut; the chorus hooks are massively catchy and the delivery from each emcee leaves nothing else to be desired; they’re crackin it, 100%.

With a lightened-up beat & rhythm to “Empty Dreams” – the lyrical-precision and delivery of Apollo takes the spotlight once again as he takes this one solo. Though the words are tough and full of equal-parts venom/knowledge – Apollo makes sure to hit his targets direct, swinging lyrical-combos that boast themselves brimful with confidence and captivating, complex word-selection. He pulls it all off like it’s all NBD…the guy sounds audibly born to be on the mic – and if the smoothness-meets-complex combination of “Empty Dreams” doesn’t convince you…then take a smooth ride and glide through “Almost There.” Believe me…you shouldn’t need more convincing than about 90-seconds into the very first-cut on this record…but if for some reason you do – “Almost There” will supply every sound your faceholes require. Featuring HiMarz once again in another solid performance and Calvin Rose II – it would seem that after listening to tracks like “Wadup” and “Almost There” that this emcee surrounds himself with just as much talent as he possesses. It’s severely impressive – and this combination works incredibly well together…words roll-out like pimps out of a caddy at The Player’s Ball. I’m pretty sure it’s HiMarz again…just around the three-minute mark starting-up that verse? Seriously…this guy is a fuckin’ talented – and every time he seems to pop-up, it’s more than memorable. “Almost There” is thought-provoking in its lyricism, smooth through its music – and 100% solid on its grind…4/4 so far on The Nightmares & Daydreams EP for Apollo Veritas as far as I’m concerned.

I like the way the dude does his vocals…like they’re doubled-up somehow…layered for maximum-effect. Apollo always sounds massive with or without’em – and all-confidence all-day-long. “So Far” strips the energy back a little…it’s a tougher one to love…which is odd; the verse is another incredibly well-spit composition of precision – so it truly is hard to complain about anything here. I think it’s just a more mellow-track, energy-wise…it feels more chilled by comparison to the others despite the blazing speed of Apollo in the verse…and sandwiched in between “Almost There” and the extremely catchy “Sit & Think” – well…it’s like I said…tough spot to be in for “So Far.” Good tune but bound to be overshadowed by the rest on this EP…certainly nothing I’d turn off – it’s still a ten, no doubt.

“Sit & Think” however…is definitely all-out audio-gold. With its twinkling sample music sparkling and synthesizing-away as Apollo starts into his verse – you can audibly HEAR the true-leader in this guy. The chorus on this one I was fifty/fifty on…as much as I tend to dig the contrasting energy – it’s the verse that steals the show through his performance and incredibly confident delivery. Weaving words through synthesized-sounds and samples – the skills he has displayed on this album are more than incredible enough to forgive him for wasting any moments on the Illuminati. The most consistently talked about, thought about & rhymed about subject in independent rap-music today…I dunno…I just don’t think that Apollo has shown us any reason to become anything close to what’s typical when he’s been so lyrically creative and unique throughout the record so far. That’s just me hatin’ on the cage The Illuminati has put these beautiful-Hip-Hop-minds in…it occupies so damn much of their time and just think of all the other amazing things they could be thinking about instead…

If you’re as old as I am…starting any track with the specific-sample that Apollo uses from Pulp Fiction to start-up the rad-beat of “My Control” – you’ll instantly think you’re about to hear “Scooby Snacks” by the Fun Lovin’ Criminals about to come atcha. Thankfully…it’s nothing near that gimmicky or cheesy – Apollo keeps this one on an incredibly cool-level with a soulful-loop on repeat to create the beat. Unafraid to speak the truth about just how good these rhymes really ARE – Apollo ends his verse in a verbal mic-drop as YellaThaOG picks it up and carries the verse straight into the endzone to do that dirty-dance. IN YO’ FACE SON! No surprise – these two stick it to the rest out there with an intense combination and meeting of the minds that puts the facts right out there for all to hear’em. Ya heard?

Seriously…not only is Apollo proven himself track-after-track to be consistently among the greats – but the surrounding talent on this record has made it just as entertaining as he has himself. Ending The Nightmares And Daydreams EP with some of my favourite lyrics dropped onto a jazzy, mid-tempo piano/beat that stays 100%-real all the way throughout its twists & turns. Taking the last guest-spot, Mac Vegas takes it old-school at the end of “All Fall Down” to bring the record to a close with an added-dose of style and salute to where it all began and where it all came from…and more-so, where it can all go once they get to stackin’ that paper good’n proper.

Absolutely worth your time – Apollo Veritas is certainly onto a recognizable, signature-style you can’t help but recognize for its tone, skill, confidence and all-out lyrical-supremacy. Be sure to check this one out and don’t miss out on The Nightmares And Daydreams EP…it’s rad as fuck.

And make sure to find out more about Apollo Veritas through the sites below!