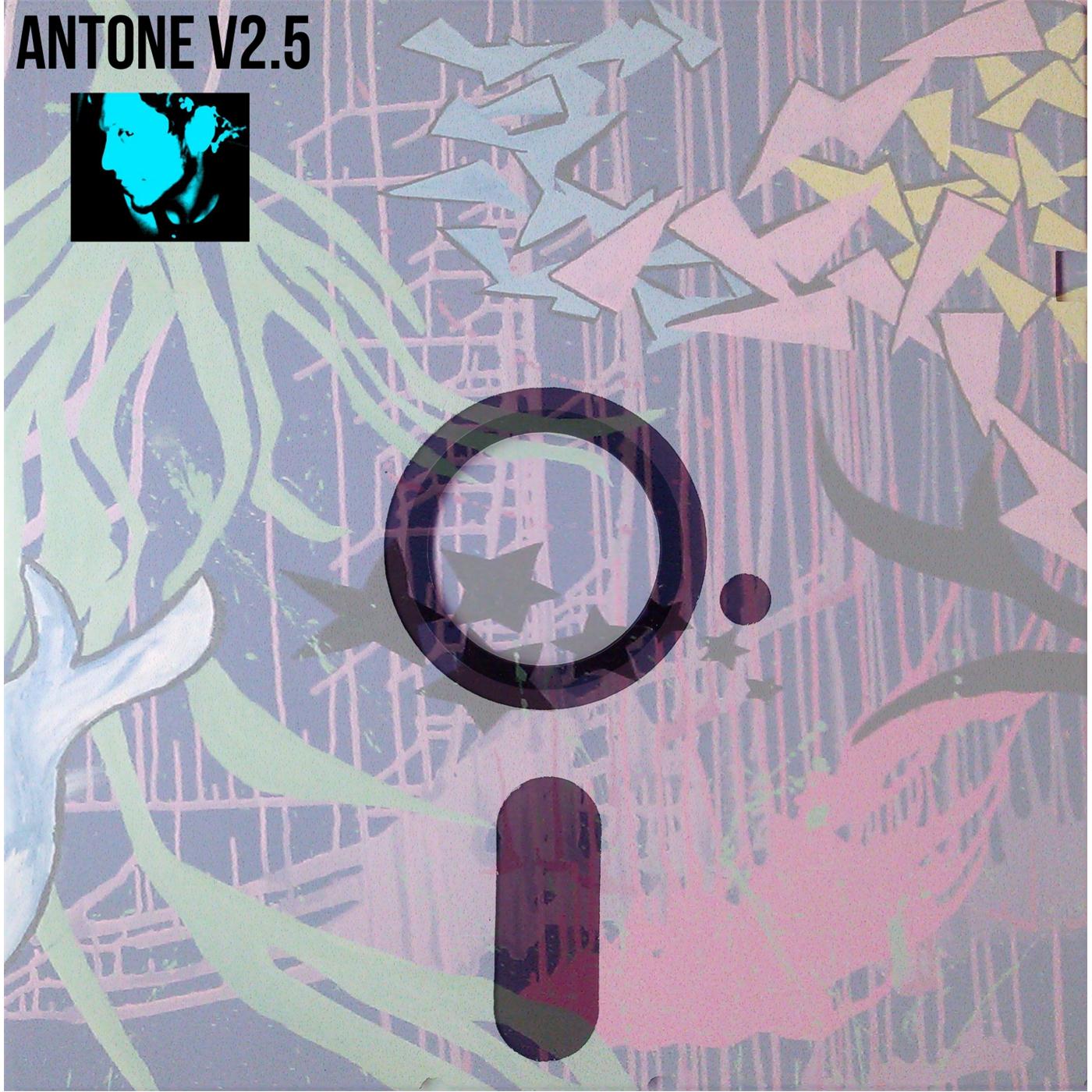 The internet is such a powerfully understated tool for music, even with as many of us being online as we are. So is timing, as ‘they’ continue to tell us…that much of our destiny when it comes to music exists on a timeline beyond our control which we may/may not fit into. So what about if you combine a massive online event that just happens to coincide with your own relevant music being released? Anyone following me yet? No? That’s ok…I’ll explain; but let me just say – this might be the best time possible to be releasing electro-music with demonstrated-skill like Antone is here on his album V2.5…

Here’s a perfect example of what can happen in your lifetime when we play the game of timing. Suppose for a moment, you’re Antone…you’ve got a full set of incredibly groovy, richly-textured, complex-electro beats. Then suppose maybe for a moment you played it how Antone has…and you released it in early 2015 online. We all release music for more or less the same reason; cause it’s DONE – but are there people out there looking for this RIGHT NOW?

The answer is in the timing beyond Antone’s control. If you live in a cave with no power-outlets and don’t have your ear tuned into what’s happening in music, then you’ve been missing out big time. The grand-electro-wizard himself, Richard D. James, just released about 150+ demos of his material from Aphex Twin online – you better believe that people are scrambling and looking for EVERYTHING-electro right now, cause they are – and excellent acts like Antone stand to strengthen the wave as it breaks onto the mainstream.

There isn’t much here to complain about on V2.5…I certainly don’t know who would have the balls to; this is electro done RIGHT. From the playful & bouncy opening of “Clanky Stars,” you can already tell that what Antone is pulling off is anything but clanky, clumsy, jangled or disjointed in any way…this is precision stuff produced & performed perfectly. Taking you into the stratosphere, following tracks “Omega” and “Orion” pulse along with electro-delight and validate Antone quickly as no simple fluke; each of these tracks are immaculately assembled and reveal new dimensions to the sound as they play through at a perfect pace that keeps you intensely listening.

The bass-heavy groove of “Blue Myst” was where Antone sold me completely. I love this crazy beat…when you listen to it closely…it’s damn nearly like the parts playing have no concept of each other, but somehow converge and separate at just the right times. If this was luck, it worked big time…but after listening to the precision cuts & beats over the first third of this album…I don’t think Antone needs to have luck on their side with the army of skills they’ve put on display so far here on V2.5.

“At The Rave” was an interesting track for the simple fact that it was the least ‘rave’-like song that has been put on the album so far. The track itself…is by far one of the most subtle, but also one of the absolute best you’ll find here on an album full of stunning material. This is almost like hearing music from underwater…the production values on this particular track alone should give engineers, mixers and master-ers out there a raging music-boner.

I really do dig the low-end groove that the middle of this album has caught onto. “We Know” is an excellently complex low-end synth & drumbeat led track…slight electro sounds grace the background until a droning pulse takes over and does its absolute best to mess with your atmosphere by pulsing closer & further away from you as the beat goes on. Then just around the two minute mark, “We Know” takes on a whole other life and brings the entire party back…then you hit a beautifully-rubbery breakdown with sounds from the left to the right. Antone understands the dynamics of sound and how to use them…that much has become astoundingly clear through the speakers as the album rolls along.

The energy comes up big time for “Sidewayz,” a cut so fresh that it will make YOU feel NEW again. It’s a track that begs you to go out and test the night like your entire body is a Ferrari. As it switches to a dark-pulse groove a minute & a half in…this is a very simple but effective change in the sound, executed perfectly for the maximum dramatic build & effect. Before the three minute mark, you’ll get another significant change, but Antone never once drops the beat unless they completely want to; it’s seamless electro here on V2.5 and this track is a true demonstration of excellence in transition.

The longest cut on the album, “Teleportation,” was also the track I found myself appreciating a little more than wanting to hear it all over again. It’s a well-assembled track, surely as well-assembled as the rest and just as dynamic in the amount of change. Personally I felt like the actual parts themselves played just a little too long per section on this one cut…there’s a few short spots where it drags just slightly, becoming a little tough to keep that interest that hadn’t once been rattled out of its intense listen since the album began. There are many moments that work well inside the longest track on the album here…but a shortened cut might have fit the album slightly better when it comes to “Teleportation.” Maybe it’s 100% accurate and it takes exactly that long to teleport and that’s EXACTLY what it sounds like…I don’t know – I’m not a scientist.

Though “Meta” could be argued to be somewhat of an extension of the vibe coming out of “Teleportation,” this shorter length serves the track well with a great change-up in the middle to an entirely new direction for the sound. As the final minute pulses along, Antone finally brings the party back to the album with an overdriven bass beat that is awesomely ominous against the haunting & hanging electro-notes being played over top. Carrying that feeling & vibe onto the final track “Rumbo (Les Etoiles)” – Antone sews up the album perfectly and gets you instantly ready for a re-listen right away. V2.5 is pretty much perfect the entire way through…and I’m telling ya, it’s not only an amazing year for music overall, but Antone is every bit of proof you need to know that it’s going to be an incredible year for electro. The timing is perfect.

Find out more about Atone at his FB page here: https://www.facebook.com/antone4657