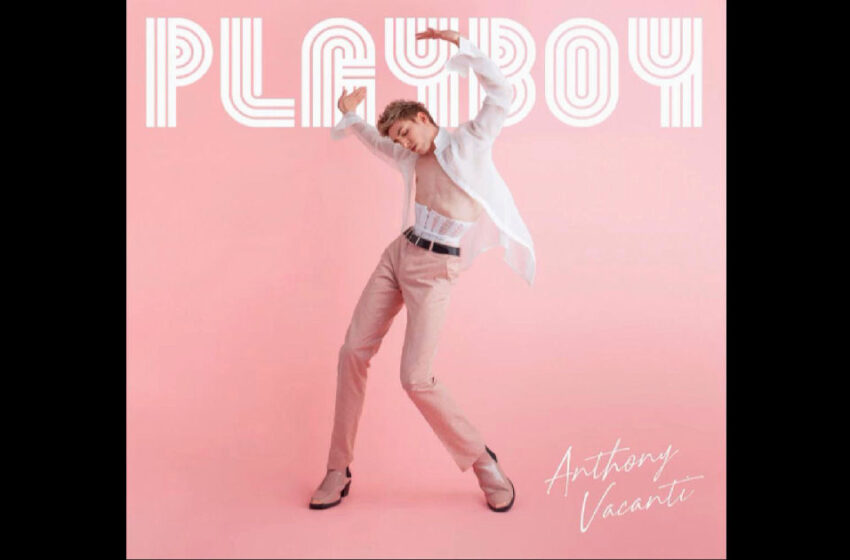 I love it when I’m checking through my playlist to see what’s up and what I might be in the mood to listen to and/or review, and getting to a cut like “Playboy” where there’s no way I could pass up the opportunity.  You click on this unapologetically flashy cut, and there’s no going back from there – this is way too much fun & too well-played to just move along to something else – this is what I wanna hear!

For real…dude should be proud of this cut in every conceivable way – not only does Anthony Vacanti have an incredibly single-worthy song on his hands here, he plays this whole track with one of the most inspired performances I’ve heard this year without question.  When we talk about getting lost in the moment and really feeling the music…I mean…look no further than this cat right here…he’s all about it.  With wild flair & flamboyant sound, Anthony’s gone all-in on “Playboy” – and he can thank himself for that – it’s completely because he’s held nothing back whatsoever that a track like this lands on so much solid ground despite its riotously bouncy sound.  Far too often when it comes to any song you’d describe as ‘fun’ in any context, you tend to trade playfulness for a bit of skill in the effort to create something with a theme…but not here, no – Vacanti gives you both supreme skill and unabashed F-U-N on “Playboy” from start to finish without compromise, 100%.  No joke y’all – as Anthony’s brand-new cut starts to sputter & spit that sweet-sweet 70s/80s sound at ya and lock itself immediately into place, everything you’ll hear is vibrantly enticing & designed to catch your attention – and it certainly does.

Honestly, the man is like part Stevie Wonder, part Madonna, and part Prince writing another killer cut for Morris Day & The Time…somewhere in the middle of all that fabulousness, you’ll find Vacanti’s got miles of space to stretch out & make an impact on us with a legacy of shiny vibes like “Playboy” over the course of his career, and he proves the whole stylistically slick sound he’s jammin’ on is forever relevant.  Perhaps comparable to The Time, yes – but TimeLESS all-around, you dig?

No idea where he’s been hiding until now, but I’m definitely glad to see this guy’s arrived, and be able to confirm that just as strongly with my ears.  From what I can tell in between the notes I’ve got here & what I can see & hear online, “Playboy” is just the second cut that’s been released by Vacanti so far, following his other single “Dolly” that was released around the beginning of April.  Two in a month is one thing…you factor in the inspired sound you’ll hear running rampantly through the rhythm & groove of “Playboy” and you can hear that Anthony’s in that creative space we all hope to get to at points, where absolutely everything perfectly lines up.  He’s currently livin’ in Las Vegas…factor THAT in too – have a listen to this single and try to convince anyone out there that he doesn’t have the essential Vegas vibe – this song is still more than flashy enough to catch people’s attention, even in that super-shiny city & mecca of all neon signs.  For a debut this is straight-up spectacular – Anthony has a genuine gift & was clearly a born entertainer by the sounds of “Playboy.”  Do I think he has what it takes?  Ha.  It’s far beyond that folks – I think he’s got EVERYTHING it takes.  To step outta the gate into a music career with this much confidence and this much skill in the execution from the music to the microphone…this much X-factor charisma & character on display…I mean…I’m just saying resistance is completely futile here – it’ll be that much easier on ya if you just surrender; Anthony Vacanti has essentially guaranteed great times for all through these remarkably catchy hooks.

There’s simply nothing to not like or love here, and that’s the facts – you know I’d tell ya otherwise.  He’s an excellent singer, a priceless personality, his music crushes with charming sound & expressive vibes, and he’s just as lyrically clever as well if you dig further into “Playboy” beyond its relentlessly glossy & addictive sound.  Not a thing I’d change about this song, or about what Vacanti is creating in the style he’s goin’ for here…as far as I can tell, this man is headed straight for big-time fame and a wild career as an all-around entertainer – be ready.