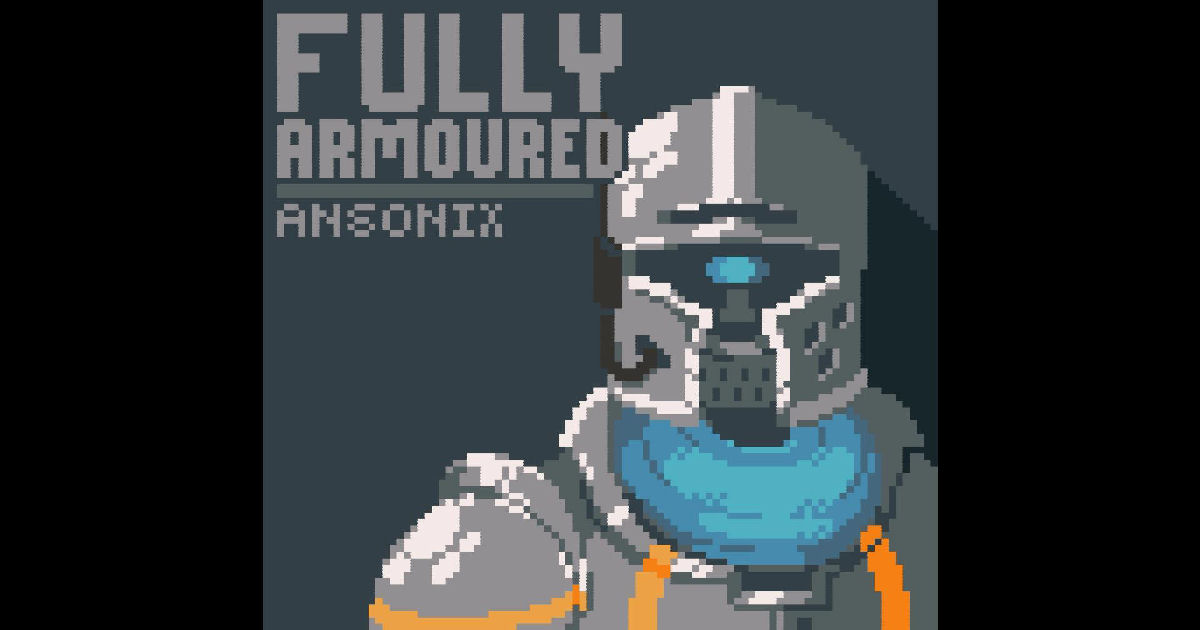 Well it’s about time!  A lil’ something for the 8-bit fans out there in 2018 – Ansonix is set to release the brand-new single “Fully Armoured” officially this Friday on the 27th.  If you’re a fan of vibrant electro, if you’re a fan of classic cartridge games from the old-school, and especially if you’re out there looking for something wild & lively to come ripping through your speakers – you’ll dig what Ansonix is up to here.

Structured to make an impact through its rhythmic repetitions and arpeggios, it’s key to note that all of what you’ll hear on “Fully Armoured” is played by Ansonix and not simply programmed.  From what I’ve read online about the guy at his website & social media, he’s spent a lot of time as a keyboardist in many bands outside of his own solo-music, and clearly at this point now when we’re finally catching up to him, he’s already moving like a well-oiled machine with the benefit of his years of experience guiding him along.  And that’s not a knock against you programmers out there…I’ve got love for you too…it’s just kind of badass to know that Ansonix takes this stuff to the level & heights he reaches by a true understanding of how all the parts of the music work & interact, you feel me?  A single like “Fully Armoured” is painstakingly assembled with professional care and precision to become as seamless as it sounds – credit to Ansonix for finding an exceptional balance in the mix that really pops with colorful electro 8-bit goodness…this song is a riot to listen to & really well put together.

“Fully Armoured” succeeds for a number of reasons for sure, but not the least of which are sound selection itself – the 8-bit style is certainly a strength here in Ansonix’s music and he uses it to his advantage throughout the entire song.  Each note and tone has brilliant texture to it…the clarity is remarkably outstanding and you feel like you can genuinely reach out & touch these sounds as they come at you, getting closer on their own as the song builds in intensity like they’ll reach out and grab you first.  The kick-in to the main beat works well, the breakdown/bring-back are all executed with flawless transitions and extremely catchy sounds…and the range of movement within this one cut actually shifts quite actively despite the many moments where it seems to cycle through repetition and hypnotic flow.  Make sure to listen close – because that’s where the real magic of Ansonix resides…in the finest of the details…in the layers of 8-bit depth that continually grow and expand their capacity to make an impact…he’ll start this all out fairly subtly before “Fully Armoured” takes off as it approaches the first minute.  As it continues to move, you start to really notice & appreciate the work that’s been put in to make every second stand out so impressively…and especially those transitions & spots where the music shifts from one spot to the next.  Quite often, you’ll get another dimension to the song along added, all the way through the build-up to the perfectly executed breakdown where it’s suddenly stripped away, giving Ansonix full license to bring it all back once again as the song steams to the finale.

So…for real Ireland…this is what you’re all about right now eh?  Can’t say I blame you – this was a riot!  And I’m pretty sure the last time I reviewed music from that part of the world, it was traditional Irish folk-songs…probably just last year even…my how time flies and how the scene can change so quickly!  I’m kidding of course – electro thrives all over the planet and in many forms – this is another solid part of that massive genre, that blissful 8-bit universe of which there are far too few right now, which is another great reason to check out what Ansonix is up to and why he stand-out apart from the rest.  For many of you, it’ll be an all-new & welcome sound in electro…for those of you that are familiar with the 8-bit style, you’ll hear that Ansonix has what it takes to impress and the sonic skills required to make an impact.  Expertly assembled and structured for high-definition entertainment that explores a genius-level of depth in its sound & production – Ansonix has a wonderfully expressive and imaginative style that is sure to connect with fans of electro & beyond to many more for his uniqueness.

Find out more about Ansonix and be ready for the release of “Fully Armoured” this Friday by visiting the official website, where you can also find access to his debut record, the Breaking Through EP, at:  https://ansonix.com/