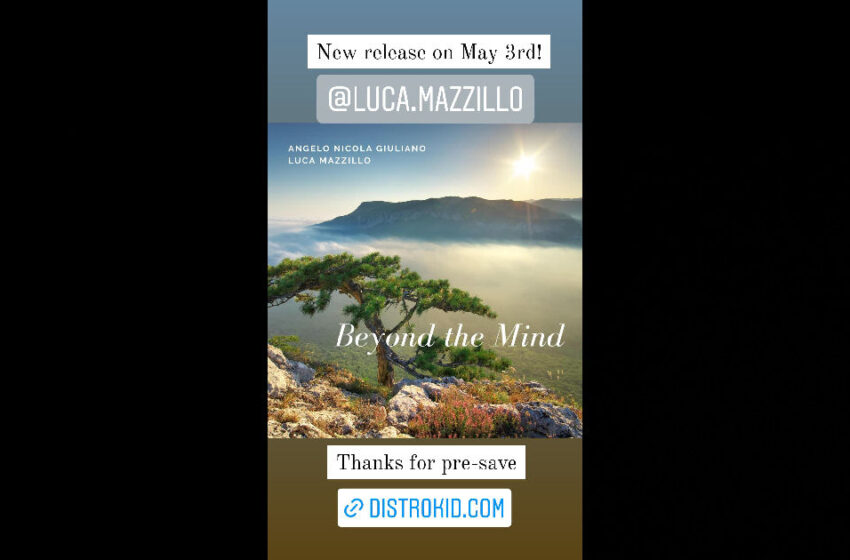 People all around the world know there’s a right way & a wrong way to put your music out there, yes?

I’m gonna miss working with Angelo Nicola Giuliano…this guy has a whole lot of talent and he’s been a joy to listen to over the past couple years, especially hearing how much he’s gotten better at what he does from the time I started listening to now.  Anyhow.  All good things come to an end I suppose.  I can’t help but think this would have been one of those great times to communicate just a little bit…it looks like someone named Luca Mazzillo has something to do with this song as well, but I wouldn’t know what, because I never hear anything else from Angelo Nicola Giuliano other than the music itself…ever.

Beautiful tune though…and immaculately well recorded too, especially given what we’ve heard from this dude in the past and the flaws I used to pick on in that regard.  Not too shabby at all now eh Angelo?  I’d say I had nothing to do with it, but I don’t know anyone else that was pointing it out to him in print, and it sure seemed to change his technique right quick after I started mentioning how the recordings could improve.  You’d think he’d want that relationship of feedback to continue…but alas, it’s crystal clear that he doesn’t…silence has a nasty way of filling in the blanks when there’s no communication to be found…so I kind of have to assume my words have had some sort of impact on him.  Anyway…I love what I’m hearing in the stunning clarity of “Beyond The Mind,” and if this is indeed the last time we’ll ever be listening to Angelo’s music, at least we can all agree it finished up on an incredible highlight.  There are many other great people out there around the globe that’ll be happy to listen to his music and take over for me from here I’m sure…and I bet any advice they have will be better than mine.

“Beyond The Mind” is a short tune at less than 2:30 in length, but it does hit the mark and will have no problem satisfying those out there that dig on beautiful piano melodies & whatnot.  Timing/pace-wise, Angelo always makes a habit of playing around with that area quite a bit in his songs…which makes for an interesting listening experience.  Most folks would never be able to differentiate between whether or not it’s done on purpose, or if it’s less intentional…and that might be something he wants to consider, but probably not.  It’s just one of those ‘it is what it is’ type of scenarios…to me, it always makes his music have a unique dimension to it that keeps me interested and engaged…to others, it’s honestly hard to say if they’ll get that Angelo makes these moves purposefully or not…I’m just the one person, and not everyone.  My gut tells me that the folks he’d respect with knowledge of classical music & an education in instrumentation would understand what he’s going for…but that is much, much different than the way the average everyday listening ears consume music, or what they absorb.  At the end of the day, a song like “Beyond The Mind” is pretty relentlessly beautiful and charming no matter how you slice it – so I’d imagine each short pause or split-second’s worth of difference in the timing as he plays is going to be forgiven, even by those out there that wouldn’t know he’s playing his music like this intentionally.  What they should be able to hear is how flawlessly fluid the melody of his piano-playing can be when that’s what he wants it to sound like…and therefore, you kinda gotta assume everything else is by design too.

Satisfying to me…it’s another lateral move here at the pages and in Angelo’s career…I can’t say that this particular tune is really pushing him forward all that much creatively, but the noticeable improvements he’s made in his recording techniques continue to help the music sparkle and shine as it truly should be.