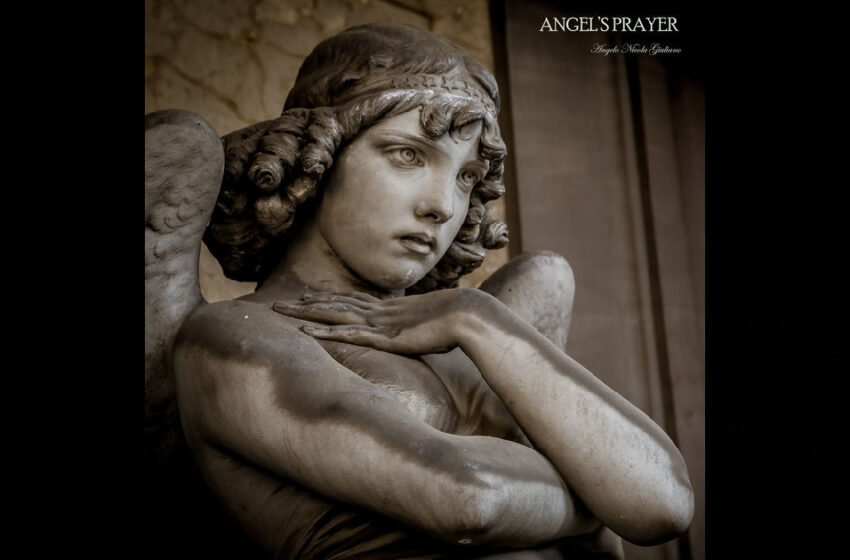 I tell ya folks…life as a music critic can be wildly predictable at times.  When you’re complementary & all smiles, of course people line right up to comment on what you’ve written and give you a big virtual hug.  When you’re critical, you often hear nothing but silence in return, despite the fact that most of the time, you’re probably making a valid comment of some kind.  It was no surprise to me at all that I had heard from Angelo Nicola Giuliano after the first two reviews I had written on his music had such good things to say…and unfortunately, even less of a surprise when I heard nothing at all after the third review I had written.  Re-read the intro above…you’ll know I wasn’t really expecting to hear anything…and you’ll know exactly why.  Last time around, I ended up wanting a bit more out of Giuliano…mostly because I’m a greedy listener…but I didn’t think I’d hear anything back after writing that review – I’ll say things that others won’t, and there’s always a risk that comes along with simply being honest as a critic.  There always will be – and that’s okay – trust me when I tell ya, we learn to live with it & sleep the same way every single night regardless of what we said, with a clear conscious that knows we try to serve a greater good.  I don’t need correspondence – it’s certainly welcomed, but it’s never necessary; in fact, it’s the music that’s made afterwards that always tells me whether or not the messages I’ve sent were received.

So the question is – were they?  Did those messages get received?  Did Angelo Nicola Giuliano hear what I had to say, make some changes, and try something different?  I’m not saying that necessarily makes what I commented on previously 100% correct…but I will say the results I heard this time around were definitely noticeably different, and improved upon everything I was talking about in my last review on his music.  I am absolutely cool with it if each and every one of you simply want to call that coincidence.

For the record, I’ve always enjoyed his music; I just want him to be the best at what he does, excel in his art, and tap into his full potential – just as I would with any of you creative-types out there.  Believe it or not, sometimes that still makes me the bad guy out there in this music-scene we all share together.  As long as I hear the evolution in the art, the craft, or the passion after I’ve said whatever I had to say in any given review I write…I’m willing to take the slings & arrows & silence that comes with doing what I do.

I felt like Angelo gives you a full snapshot of what I had talked about in my review of “A Peaceful Day” and how he’s gone about evolving his art between these two new singles I’ve got here today.  On the one hand, there’s “Angel’s Prayer” – which was released last year, likely closer to the time of the previous single I’ve mentioned – and we’ve also got “Visions” released in early 2022, which makes his evolution crystal clear.  As with all-things-Angelo Nicola Giuliano, the compositions are as beautiful as they are compelling & captivating to listen to – and I believe that even on “Angel’s Prayer” you can already hear strides in the right direction.  Many of my comments on his music in terms of any kind of criticism I’ve given in the past revolved merely around the ambience of the keys of his piano, and how that could potentially be a distraction for some listeners – it’s still a present factor on “Angel’s Prayer,” but less so – and with “Visions,” that element is altogether gone.  In both cases, that allowed me the opportunity to immerse myself more within the experience of listening and delve right into the stunning melodic & powerfully evocative compositions that Giuliano is so highly capable of creating.  “Angel’s Prayer” is a pensive & enchanting song that gives you a thought-provoking tapestry of sound woven from Angelo’s mesmerizing piano melody – he clearly finished last year on the notes of another highlight in his catalog and an all-around great song.  While the ambient tap of the keys is still prevalent here, in this instance, with it being less of a presence in the song overall, it becomes more of a complementary part of what we hear…when it’s done right like this, it’s like we’re right there in the room with him as he plays, and it can be truly effective, rather than distracting if there’s just a bit too much of it in the mix.  Which is all I’ve ever been saying all along – and think of it from our perspective as listeners – what we really tune in for whenever we listen to Angelo’s music is certainly going to be his gifted compositional skills, remarkable musicianship, and spellbinding piano melodies – the more we hear of that, and the less tapping we hear along with it, the better the results are gonna be in the court of public opinion.  I think that’s already true of the exquisitely deep & gorgeous melody he’s created on this contemplative tune, where Angelo’s written a musical metaphor that echoes the sadness of the destruction of our environment and our beautiful planet Earth.  He does a fantastic job of creating moments you can really feel with the way he plays, and he excels in creating a song that hangs in the air like the distant memory we’re all gonna be if we’re not a whole lot more careful in the way we treat this planet we’re living on.  “Angel’s Prayer” is a pure dose of melancholy beauty; a balancing of power between the light and dark.

All that good stuff being said – if you’re missing the evolution of Giuliano’s music between last year and this one already, then your ears are on backwards.  Whatever it is that he’s done to tweak the production and final mix, or perhaps maybe even within his own technique – the difference is not only noticeable in the clarity of his latest single, he’s created the blueprint for his own pathway forward here.  This is so much more revealing of what I’ve been hoping to hear from Angelo Nicola Giuliano when it comes to our ability to access the heart of his piano melodies without any obstacles or interference in the way.  Composition-wise, I suspect he’s never going to have any major issues…the man genuinely knows how to write & create melody in ways that spring to life through your speakers and possess a superbly sincere & passionate demeanor in the sound & performances you’ll find in Angelo’s music – but there’s not a doubt in my mind that you can hear an inspired evolution that has occurred between his past & present when you hear the crystalline clarity of his latest song “Visions” – this is Giuliano, leveled-up.  Is it a response to tough criticism?  Perhaps.  I’m not here to take credit for anyone’s hard work & effort – all I’m saying is that every issue I might have ever had in the past, is fully resolved in the way he’s recorded “Visions” – this is pretty much everything I wanted & hoped to hear from Giuliano on his next time out, and I’d be the first to admit, I think he’s even exceeded any expectations I could have had here.  The way the melody shifts & moves right around the first minute-mark of “Visions” is something to truly behold…Angelo plays at a wonderfully mesmerizing pace, often letting the notes ring out & hang suspended in the air for just a moment or two before he plays that next one…he’s fantastically clever, and equally sincere.  It’s a combination that continually leads him to victory after victory when it comes to the heartfelt compositions he’s written & played…and with the advantages you can now hear in the clarity of the production & performance on a song like “Visions” – he’s bound to open up the doors of opportunity for his music even wider for the future to come.  I’m impressed all over again Angelo – this was definitely the kind of song that speaks volumes on behalf of your continued evolution as an artist, your dedication to growing your skills & refining your craft – “Visions” is a huge win for you brother, all around.

Find out more about Angelo Nicola Giuliano at his Instagram page:  https://www.instagram.com/angelonicolagiuliano