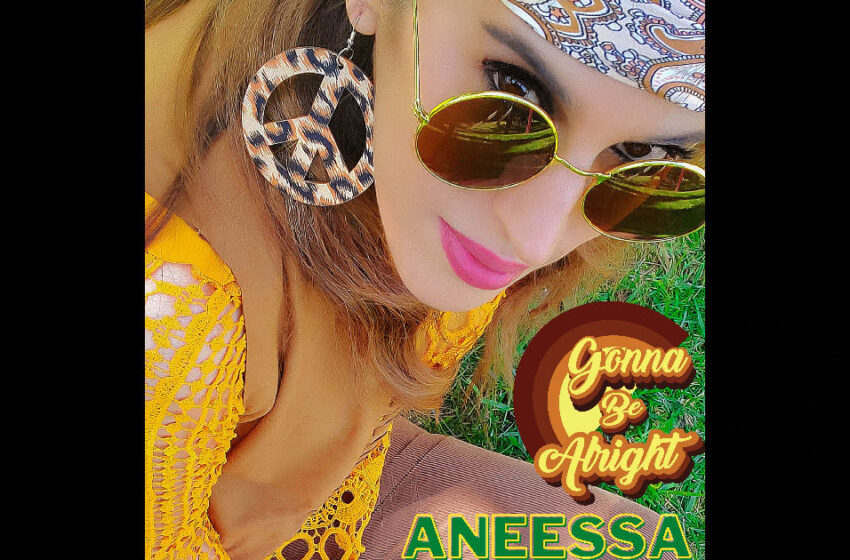 At first, I ain’t gonna lie to ya…I had reservations.  Any time I see a song out there that attempts to sell itself to us in the words of a title…well…y’all know me, I tend to get my back up a little bit.  So when I saw the video for “Gonna Be Alright” by Aneessa actually listed as “Sunny Feel Good Song! Gonna Be Alright” – Aneesa – Music Video – 70s music, Rollerskates” my first reaction is usually something like – ok?  You set yourself up for the instant challenge of a song that better feel like sunshine, better make me feel like I’ve slipped into the 70s, and better make me feel like rollerskating…otherwise, ain’t music just better off speaking for itself and letting the listeners out there decide how it all makes them feel?

And in most cases, I’d tell ya to completely avoid all of that extra-labeling.  Tags don’t work quite well enough in anyone’s favor to potentially sully the art in that way – but that’s how I personally see it.  I’m not everyone, and I’m not Aneessa – the truth is…if everyone out there was as organized as she is…I might actually think about it all much differently.  Not only are all these tags essentially a part of the way she brands things online when it comes to her music and career, but she’s got interviews and vlog-posts to support her singles…she’s got peeks into the recording process, she’s got music-video teaser/trailers, she’s got incredible MERCH online, including an amazing baseball-style T-shirt for this very single here.  I went from being all grumped-out about the tagging process with “Gonna Be Alright” to actually starting to marvel at how much she’s accomplished over these past couple years and how much effort she’s put into every aspect of her career.  If I’m being real with ya, these are the kind of smart steps that add up to success…there’s identity established both inside & outside of her music, and she really has put the work in to making that happen.  Not only did she move from France to Los Angeles in pursuit of her dreams of making music, but once she got there, she clearly had a strong concept of how to go about presenting it all to the world.  I’ve got respect for that, for sure…I admire artists like Aneessa that have pushed all-in on their career & give it everything they got, every single day.  She’s having genuine fun with the whole process – above all things, that’s what matters most – and plus, she sounds great on “Gonna Be Alright,” which is a bonus.  So I’m onboard Aneessa!  Tag it up and call it whatever ya like, it sounds good to me.

Besides…she’s already racked-up well more than 100K views on the video for “Gonna Be Alright” at this point.  I don’t think I’ve pulled off 100K views for anything I’ve done in nearly nine years – so what do I know anyway?  I should probably be taking a lesson from Aneessa here, rather than trying to advise her.  “Everybody tells me ‘no you can’t, this is not for you,’ always try to bring me down, tell me what to do” – she’s heard enough advice from people out there…and truthfully, she doesn’t need any of it – not from me, not from anyone else – she’s got all the talent it takes to do what she wants to do, and she’s got all the right ideas on how to set herself apart from the rest out there.  You’ve got my complete respect Aneessa…and I’m cheering you on – I think your music speaks for itself, but I also ended up really loving how much effort she’s put into every aspect of her career surrounding it, and given herself multiple paths toward success.

“Gonna Be Alright” is a highly pleasant hybrid that sits brilliantly between the worlds of Soul, R&B, Pop, and even a little Disco in the mix via that Motown sound, assisted greatly by the skilled production of a veteran straight from the scene itself, Mr. Michael B. Sutton.  It’s catchy, it’s smooth, it’s got a remarkably natural vibe that seems like a perfect fit for Aneessa…all-in-all, there’s really not much you’d think to complain about with this new single right here.  It is written & performed in one particular gear – if I’d concede anything to ya, it’d be that you can tell a singer like Aneessa probably has much more in the tank in terms of how she sounds & her vocal-range & all that…but not every song we’ll ever sing demands that we have to flex every single skill we have, every time.  She’s made the right moves & made the right call on how to go about tackling “Gonna Be Alright” and staying in the low-end melody of her vocals for this song…it’s kind of like listening to something like Sade with a bit more sparkle & shine.  Can she belt out some high notes too?  Perhaps!  But that’s not what this song called for – and wisely, she’s kept her cool on-point, and ensured that nothing is out of place in the process as a result of making smart choices that suit what “Gonna Be Alright” needs without coloring outside of the lines.  It’s tight from production to performance, and she’s got an excellent video to get her personality onscreen to go along with it…really, there’s no other way to look at it or listen to it other than to come to the conclusion that she’s done all the right things to make this particular moment in time stand out as it should.  It’s fun!  It’s got bounce.  It’s got verifiable lyrical substance beyond the sunny-side up sound, and plenty of meaningful words that’ll genuinely move you & help you get to know who Aneessa is & what she’s really all about.  It’s loaded up with the stellar charm of its main star, and it’s got hooks that are bound to stick with you for days & days afterwards…”Gonna Be Alright” is a memorable cut, and that is always an indication of a mission completely accomplished.  Do I think it needs to be sunny out to enjoy it in-full?  No!  Of course not – that’s been my point all along about the tags & such – you push play on “Gonna Be Alright” and you let Aneessa bring the sunshine to YOU, even if it’s pouring rain outside – there’s enough light in her soul and comforting warmth in the vibes of her music that you’ll feel like you’re at the beach, I promise ya that.  Ultimately, I think she’s got a single to be proud of here with “Gonna Be Alright” – and further beyond this stellar gateway into her music, you’ll go on to find a highly dedicated artist that is supremely focused on turning her wildest dreams into her daily reality.  If she keeps the quality up like she does here from sight to sound…she’ll get there quickly in no time at all.

Find out more about Aneessa at her official page at Instagram:  https://www.instagram.com/AneessaMusic