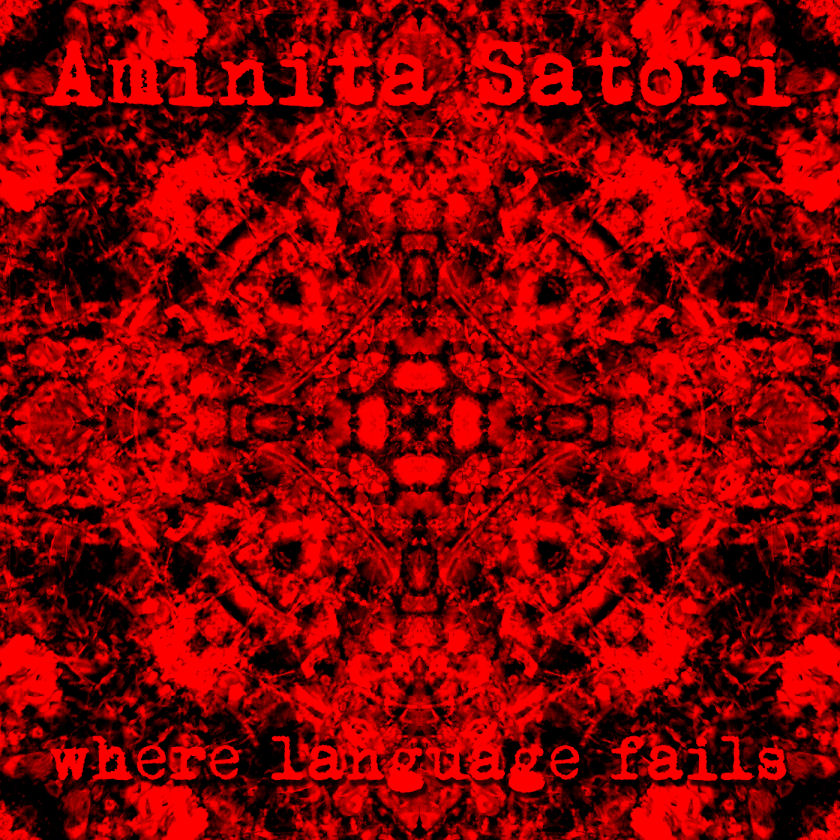 Undeniably, there is a true artist that ‘gets it’ here…though from what I can gather that hasn’t always been the case. Aminita Satori used to enjoy a successful career as a soundtrack producer for major television ads & promotions for giants of industry like McDonald’s, Verizon, Budweiser & many others. Though Satori could have spent a lifetime on this proven path of success, after a decade spent in the hollow world of advertising and big business…from what I can gather, the true artist inside Aminita made one last attempt to break free.

This, dear readers, if you were to ask me…is Satori’s greatest success of all. Not only did Aminita walk away completely from the old life – a new one…a beautiful one…had finally become the priority; the life of a true artist. With an incredible passion, AS has assembled some sparklingly emotional music that really moves along WITH you; music that embodies the complete tones and sentiment within freedom of expression. So consider me among the many out there that are emphatically expressing just how supportive I am of the idea of Aminita Satori being on the right side of the artistic fence now, and forever. Making music with real grace, real style and with accessible sounds and beats that range all over throughout the innovatively smooth album Where Language Fails; this is an artist that I consider us all lucky to have considering the backstory leading to this point.

The highlights start instantly on this album, and the gift of atmosphere is right in the spotlight as this slow, smooth journey begins and we all take our first steps into the music of Aminita Satori in the opening song “I Won’t Forget You.” Displaying right away that this is music I pretty much want to spend every moment of my life listening to – this is a real star hitting my ears here…it’s like Peace Orchestra, or Thievery Corporation…only soooo much better! Though the album is a massive one at twenty-songs in total, there’s not a single moment in here that doesn’t invite you right in to sit & listen. Case in point, “Take You Higher,” starts out & remains incredibly laid-back, smooth and practically chills out on your couch right beside you.

Lots of room for different tones and blends of sound, this innovative electro-artist switches the texture & energy up and kicks into an otherworldly atmosphere in “Ether.” I don’t want anyone to mistake what I heard in the opening songs – I was already convinced by the first two; but this…this is just complete confirmation of a true mastery of music & real gift for communicating THROUGH it. This pulsing emotional, subtle-display of melancholy mixed with inspiration is completely intoxicating and aptly named; “Ether” is the early confirmation that this is no regular mind at work here – this is a full-on musical genius we’re dealing with. There’s everything from horns & sax, to guitars, to swirling electro…but also an undeniably beautiful melody that’s accented fantastically through flawless production.

Heading into a smoothed-out electro/jazz combination in “Along Came A Beautiful Noise,” this is almost Beatles-esque in the nature of the melody, but man…Aminita Satori has a real gift for the blending of ideas through incredible switches that feel audibly natural, warm and inviting. Despite the weather that drips into the following track, “Rain,” it STILL contains that incessant feeling of connection…this is music I truly believe resonates at the core of us all. How could you NOT groove to this?

This album really doesn’t let up and completely allows you to put this on and play it like the audible soundtrack of your life as you live it. Innovative cuts like “Halleluya,” put both dark & light melodies together, combined in really hypnotic & smart ways as the electro also displays both an intensity, yet chilled-out overall sound. The music pulses back with vibrant life in “Autumn Song,” another really smart arrangement…reminds me a lot of DJ Shadow’s work in UNKLE with the combination of the brilliant guitar sounds into this beat; the hooks run constantly and deep on Where Language Fails proving ultimately that music can express what’s inside of us better than words ever will.

“Feel It” starts out subtly and gradually builds its beautiful melody into pure low-end electro-joy. Really is an expertly mixed album – Aminita’s previous experience has clearly played a role in just how incredibly tight & perfect each and every sound is being used. You can easily hear this is an expert hand at work, and the inclusion of nature and other atmospheric elements you’d find in soundtrack work find their way into the music on this album in astounding ways that captivate the ears in full. Listen to “Beyond” and you’ll hear all kinds of gorgeous production aspects as this cut heads up straight into space and nestles in right next to the stars.

After a brief stop at the slow-funk “City Of Luz,” Aminita takes us into the second-half of the record with one of the most inspired performances and tracks on the entire album with “Karma Tonight.” No joke – this is such a well-assembled cut it could bring you to tears with the genuine emotion it creates and stirs up in a person. It’s one of the best melodies I’ve heard on a record this year hands down and just delivered absolutely perfectly from every speaker on your stereo right into your hearts and ears. Strikingly beautiful.

Where Language Fails flows along gorgeously through the slow-groove of “Bliss,” a great song in one of the toughest spots to follow another on this album; the vocal-samples and excellent use of keys in this track almost make it sound like they sent The Purple One, Prince himself, right into space. Contrasting that sound against the next with the bright and playful rhythm of “Carnival,” the energy comes up and the party is clearly on – but LISTEN to the arrangements…the way that the guitar sounds, or other electro elements drift in and out…there’s a word for it…I swear I know what it is… Ahhh yeah…SEAMLESS. Mixing it up energy-wise to keep those ears attentive and your eyes dry, “Carnival” gets the smile right back onto your face from wherever it might have wandered off to.

The transitions and rhythmic change-ups in “Dreaming” might very well induce a raging music-boner or moisten your lady-parts – this intensely hypnotic & pulsing rhythm has a dangerous but sleek & sexy feel to it. I love the ability of Satori’s music to create that push/pull within the light & dark of any melody. Honestly, the understanding of sound itself on this album…it’s just mind-blowing stuff…

Take “Soma” for instance…you won’t see this beat coming for miles! Does it work? YES – because what DOESN’T on this gorgeous masterpiece of an album? You dare to question Aminita Satori at this point? Madness I say. Trust in the instincts of this incredibly creative musical-innovator and ye shall be rewarded – I promise. “Soma” leads you right into the fantastic and beyond in a light-hearted melody jammed full of versatile & sparkling sounds all connecting together beautifully. Sets the stage well and keeps you in party-mode for the highly danceable track to follow, “Galactic Dust,” as the album starts into its final quarter.

You can tell immediately from the opening of “Then There Was One,” that Satori still has much to give, even as long as this album may appear to be it speeds by in slow-motion. Another wicked low-end groove supplying the main hooks with light rhythms and textures overtop, the eventual pulse & melody combination of this song breaks in sparkling & shining like a brand-new sunrise. Giving way to the incredible keyboard work on “Midnight Moon,” it’s a real slow-burner full of ideas that reveal themselves slowly. Reminds me a lot of The Album Leaf here on this song, and that’s never a bad thing in my books, also like the slowed-down, electro, instrumental version of the melody in the chorus of R.E.M.’s “Mr. Richards.”

With a blending of sounds like these, you’re bound to find multiple moments that connect with you or remind you of other music, other memories…but the bottom line is that the music of Aminita Satori really DOES take you somewhere. “Together” is a wicked combination of intense electro, almost frantic by comparison to much of the album…but it’s the smart, smart instincts of Satori that allow this artist to combine the intense with the intensely-chill to create an evened-out listening experience unlike most you’ll ever stumble across into.

As Where Language Fails spreads out and expands into one very dynamic final song, “Your Love,” takes this album right home in this final display of pure beauty and heartfelt combinations. Bringing in textural vocal-samples and taking this final track in all-directions, the commitment to excellence on this record is about as breathtaking as it can get and delivered in full. It’s ambitious in its ideas, and executed with confidence and precision; consider me a massive fan of Aminita Satori – this is an artist with a future that burns brightly with the real fire of passion and an all-encompassing blaze of inspired creativity & beautiful music.