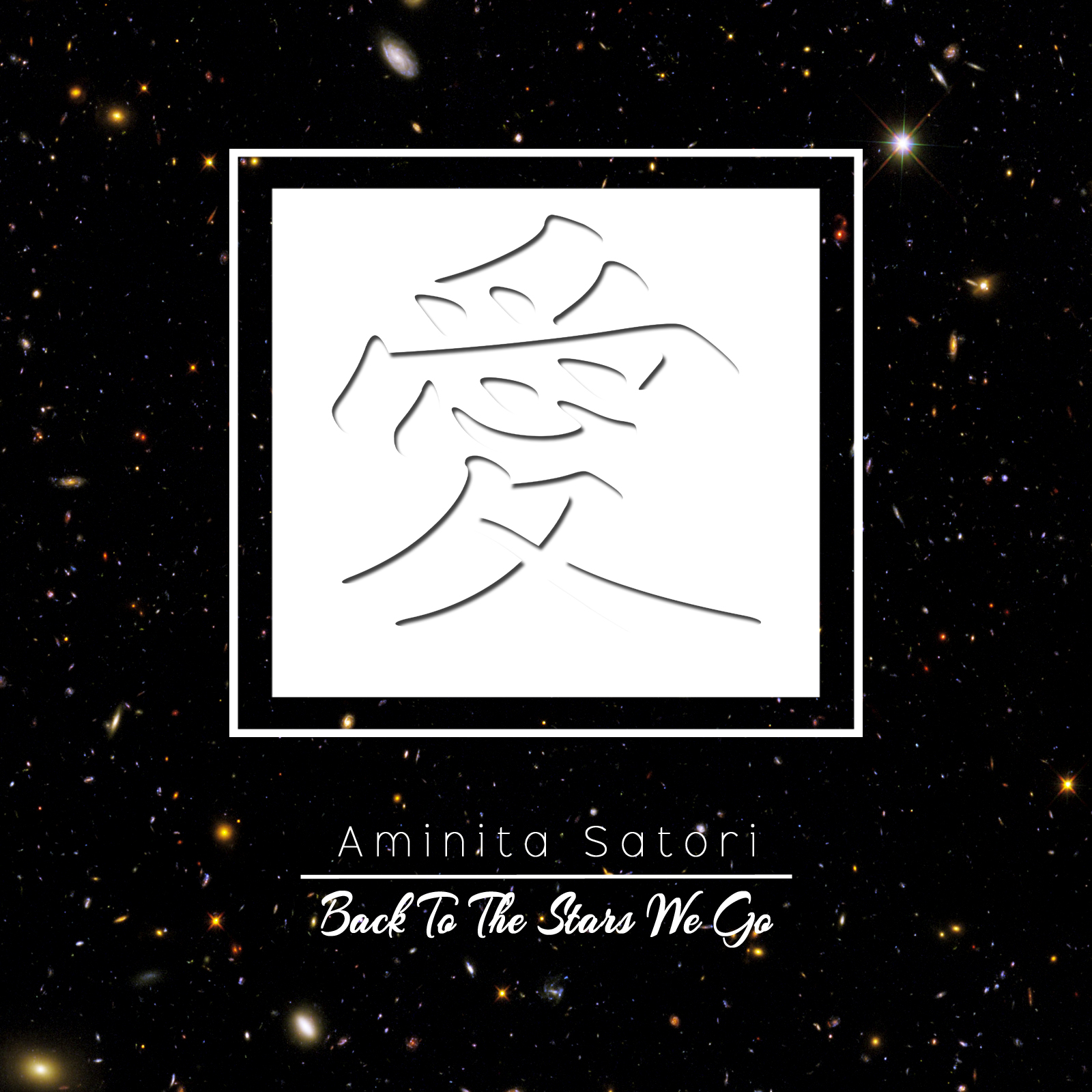 Aminita Satori – Back To The Stars We Go – Album Review

Had I not already been in a stellar mood today, Aminita Satori’s new album Back To The Stars We Go would have put me there.  I easily remembered that name when I saw it pop into the playlist…this was an artist that I had nothing but amazing things to say about the last time we heard from him…and this time, somehow, he’s found a way to still exceed my own high-expectations for where he might have taken his music too next.  Back To The Stars We Go is full of extraordinary textures, tones and electronically-chilled beauty; it’s a complete trip to listen to and MASSIVELY addictive – side effects of listening that will occur instantaneously.  Aminita has a professional’s touch – and his natural instincts for songwriting are jaw-dropping.

What this instrumentally-insightful solo-artist can do…through music alone and the way he writes, the amount of emotional-depth and the resonating way his songs bury themselves into you, would make any artist or band that feels the need to use words to describe anything at all, completely jealous of his ability.  I loved his last album Where Language Fails…but perhaps even I’d forgotten just how much I truly love this guy’s ideas over the past year; I certainly remember now – I’m loving everything I hear on Back To The Stars We Go!

At a controlled eight-songs, Satori has clearly chosen carefully and wisely as to what to include on this new record.  “The Way” sends the album instantly plunging deep into the depths of electronic low-end as bright-elements sparkle & shine lightly overtop of the bass-melody.  These are sonic textures you can FEEL…songs that are made with this much of a master’s touch are truly impressive to find in amongst the independent music-scene, even with my own high-regard towards it.  I can’t help but hear the stunning difference in Satori’s approach in sound/production compared to most bands or artists you’ll ever stumble across; there’s simply no arguing just how much control, precision, passion and personality that this artist can add into his music – it’s at the maximum, pro-level, every time out it seems.

I know you’ll want further proof…that’s good!  First of all…LISTEN to this album yourself…because you’re completely missing out if you don’t and you shouldn’t just take my WORDS for how awesome this music IS.  Satori provides the proof you need right away – the second-cut “Anna” is one of the best in the electronic-genres that I’ve heard in years as far as up-tempo tunes go.  “Anna” is built out of sheer audible-rubber…these sounds bounce brilliantly back and forth from your speakers…similar to something you’d hear from Linus Loves or Dada Life, the dynamics shift all over the map, building and evolving perfectly over its short & sweet terrain.  It’s just over three-minutes long…and I feel like I could listen to this track for the next two weeks straight on its own.

“Anna” would be a tough one to follow-up…any song after it could potentially suffer the burn of being a great song but still being in the shadow of that amazing second-tune.   Aminita plays this record smartly, putting the diverse and versatile title-track, “Back To The Stars We Go” after “Anna” – and I think that was a wise move.  The title-tune represents a little more of the overall atmosphere than “Anna” does for the album, which you’d think would be a given but not many title-tunes really pull that off as well as you’d think.  And it’s not that every song has to represent the album…but “Anna” is more the exception than it is the rule as far as the sound…”Back To The Stars We Go” really sees the album start to take its shape and builds the concept up to even further heights.  It’s a moodier song, there’s no doubt about it…but it’s strong; on most days I’m going to want to make sure I’m there to hear “Anna” before it plays…but I’ll always be happy this chilled-out, drifting atmosphere of “Back To The Stars We Go” continues the album on afterwards.  Each sound is so well-pronounced, clear and present in the mix…as “Back To The Stars We Go” evolves throughout its length it continues to soar further and further into the fantastic.  Excellent hypnotic pulse to the song and absolutely wonderful horn-additions and other samples fuel the title-track’s brilliant ending.

“Back To The Stars We Go” also ends on tones and inspires the beginning of “Flying.”  Smart saxophone & synth elements, great drum & bass-line…light & airy, “Flying” musically represents its moniker.  Very much like the good ol’ Boards Of Canada from back in their prime…it’s another tune you can quickly find yourself lost in.  The album itself, truly is full of that beautiful peace that lets your mind wander and drift yet stay with the music for every beat and passing second.  “Flying” is jazzy and rhythmic like something that Prefuse 73 would have created for the One Word Extinguisher album…a good-time tune with a ton of heart and personality that makes you happy just to be alive and listening to it.

Much like the expert hands he laid on the music found on his previous record Where Language Fails, Aminita Satori continues to make each transition from song to song occur flawlessly.  It’s like the entire album is like a flower opening up for the first time from a bud to a full-bloom.  The chilled-out bounce of “Always With You” is a sweetly-toned and uplifting one…you can almost hear the words ‘always with you’ in the way Satori plays the synth’s melody-line…he plays music like people speak words.

If anything, I’d suppose “Buddha Blues” would probably be the ‘least accessible’ track to the masses out there…but many people, myself included, will find a whole gold-mine of audible innovation here.  Excellent percussive-elements…awesome saxophones drift in and out of the mix…it’s a fairly minimal track but “Buddha Blues” finds some clever ways to change within itself and still deliver.  A little more towards the experimental-side of Satori’s work…lots of bending tones and Back To The Stars We Go begins to shift a little here towards the albums end.  Those rubbery bends naturally continue on and drive the more danceable beat alongside a steel-drum rhythm in the following tune “Salvation.”  Again…Satori has dipped a little more towards a more experimental/artistic atmosphere for this track and the last…but it works for me.  For some…I could see that the drive towards the end of this record might prove to be more of a challenge and I can admit I didn’t quite feel that these two tracks back-to-back packed the same amount of initial punch as the first five tunes…but the quality, ideas and execution are all still perfectly in-line.  The songs hold up on repeat listens…and really, they are logical progressions as the flow of the record continues on to its final-cut, “Yeah Yeah.”

Mix and production shine perhaps slightly brighter than even the music does in this last song.  “Yeah Yeah” is another solid song in the Satori catalog…and it ends the album in a logical progression from where it all started.  Something in me still wants to say something like…the layout works, but feels almost backwards in a sense…I dunno – it’s a double-edged sword; you can put all your best tracks up-front and hope people continue to listen if things dip, or you can place the ‘softies’ at the beginning and hope they stick with it as the album continually warms up.  I’m not so sure that the start of this record doesn’t outshine its ending – but I am sure that I’ve enjoyed everything I’ve heard once again from Aminita Satori.  The quality is outstanding, the music is extraordinarily chilled-out and easy to sink right into and float away – Back To The Stars We Go showcases the signature Satori grip on otherworldly atmospheres and the ability to captivate the mind & fuel the soul with his instrumental creations.

Get yourself some of that new album right here at iTunes:  https://itunes.apple.com/us/album/back-to-the-stars-we-go/id1089812778

Tags: Album Aminita Satori Back To The Stars We Go sleepingbagstudios