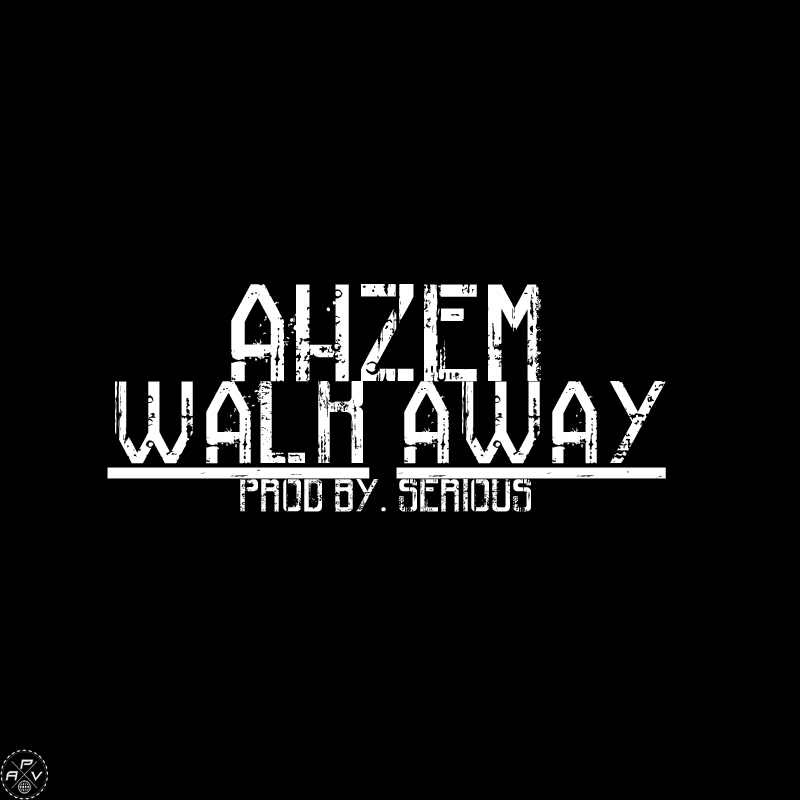 Here’s an interesting and serious track in more ways than one. Not only are the subject matter and lyrics in “Walk Away” completely based in reality, complex issues & emotional states – but it’s also produced by a talented dude going by the moniker of Serious. I don’t know much about the previous work of what Serious has/hasn’t produced in the past…but if he’s sitting there looking for, or waiting for beats to come around with a serious-tone to fit into his Serious-style and Serious-sound …well then he’s made another great choice in finding & producing this new slow-pulse rap & rhythm track from AHZEM.

In my opinion…I think ‘singles’ are just about the hardest way to gain longevity. Unless you’re right on top of your game and releasing about one a week…you can easily get lost in a playlist’s random shuffle with the one song people love and no other evidence of the hard-work and effort you’ve more than likely put into a ton of other songs and material. Don’t get me wrong, quite often you can rise right to the top of those playlists…you can be that number one track…but if you don’t follow up that release with something else freakin’ quickly you’ll risk falling out of people’s minds, thoughts and stereo-systems right quick. With the sheer amount of music there is out there these days…it’s not the 1940’s anymore where you can count on the record player to spin your one song over and over cause only 18 other songs were around at the time; it’s a far different time that we live in now, competing with the past and present day musicians out there and the entire history of music just to be heard.

So the question really is…has AHZEM put together a single here that will make you want to scout him out further? Or, has AHZEM built himself a track that people will re-visit over time to listen to over and over…or has he made that song for the perfect moment…the one that people will hunt through their lists for thinking to themselves ‘I just NEED to hear that song again…what was that one called…’

Truthfully…I don’t KNOW; but I also don’t see why NOT. Have a listen here and let me explain…

There’s zero doubt about the skill-level and style of AHZEM – there are definitely no issues here; he rhymes with a creative-flow and tone to match the depth of the often devastating lyrics. As a writer, the same applies; I can tell you that “Walk Away” is pretty much as flawless of a performance and production as you can ask for. The rap itself is complex, rhythmic and unique. I think the concepts within the song are entirely relatable; I think they’re tough but REAL…these are emotions we experience and truly feel when trying to share our sides of the story to a person that can’t/won’t or don’t hear what we’re saying. Really…when you stand back and look at this as a whole-entity, and what’s been put into it…everyone was right on their game here; this track has come excellent and that can’t be denied.

But here’s the thing…the interesting point that I’m trying to make about the impression and impact a single can make; right now I’m left with the idea that maybe the music of AHZEM never does find an energy above a slow-pulse. At the moment, I have no idea…like I said…I’ve only got the single to work with to form my overall idea and impression of what an album, EP or future singles might contain. If you look at production and performance, you can’t argue that this wouldn’t work in the context of an album; but as a single and first introduction to AHZEM…as much as I might like the song myself, I am wondering if a slow-tempo beat like this will be able to reach the widespread audience it deserves… Time will tell!