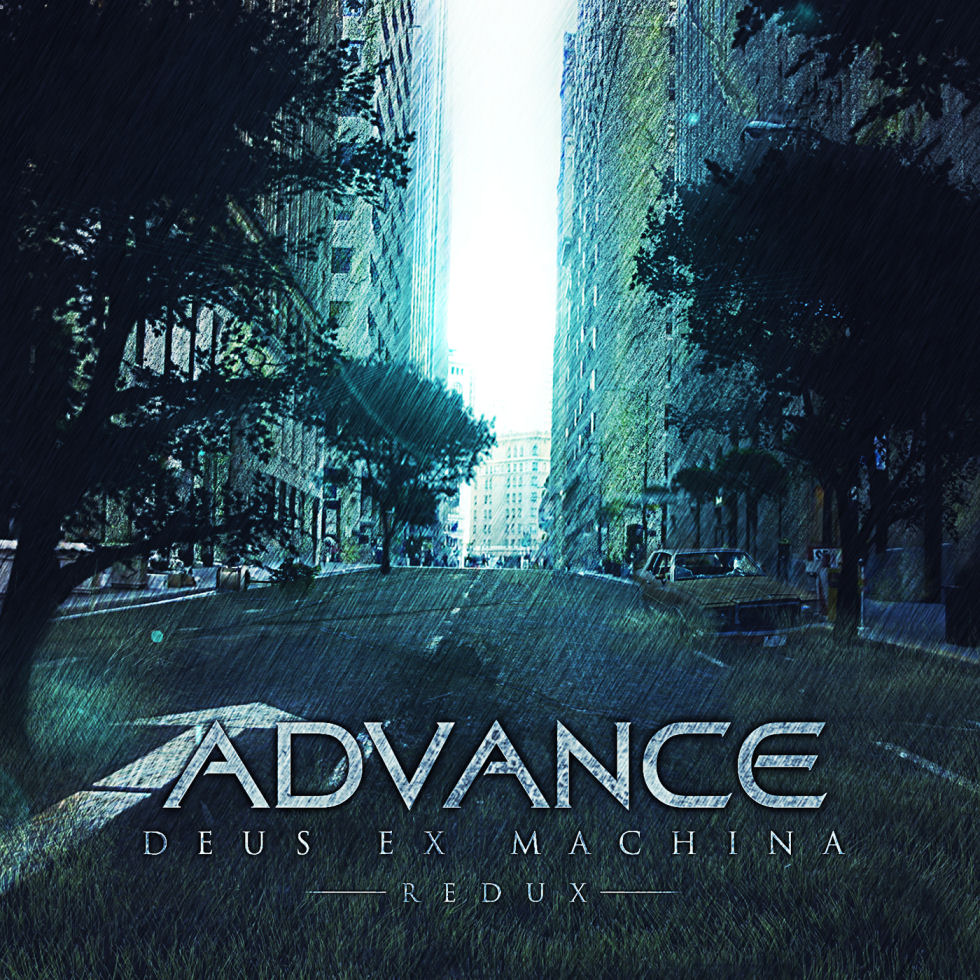 Big synth, big beats and big anthems rule throughout the electro-composition that makes up the music of Advance on this hefty double-disc version of their 2014 release. Helmed by the soaring vocals of Tom Perrett, Advance has recreated these tunes in a monumental fashion – each track is completely massive in both scope & sound with twenty-songs where you’ll only find TWO less than four-minutes in length! To say this new double-disc is a time-commitment would definitely be an understatement – its total length would span just about the same time as your favourite movie; but thankfully Advance has created energetic rhythms that change, switch and pulse with frantically intense, bright & sparkling post-punk-meets-electro atmospheres that keep the attention focused easily.

The machine fires-up early with “Weapon Of Choice” starting off with a marching beat that kicks the energy off in a high-tempo, electro-stomper. Flowing from where it leaves off into another pounding beat, the big-anthem style of Perrett’s vocals in “Fractured Existence” bring out this song in incredible ways and give it a structure within the surrounding electro-elements. The chorus swirls, sparkles and shines beautifully…it’s a powerful, committed sound that echoes the passionate assembly in the music and completely does this atmospheric track a lot of justice. It’s a hefty song with a meaty breakdown into almost nothing before it bursts like a supernova back into the melody’s final run; Perrett comes back in with a fantastic part and this song packs in the passion and energy massively before departing.

A lot of these tunes pack that marching-forward, hurtling-towards-destiny kinda feel to them. The pulse & rhythm of “The Road,” along with the lyrics themselves all contribute to the atmosphere packed full of wonder & questions along with answers & conclusions to bring this story to a decisive timeline. As much as I appreciate the words in “The Road,” the song definitely finds a completely new-life post-breakdown and marches itself right into the fantastic & beyond in a real highlight of this double-disc. As it collapses into the stormy, subtle opening of “Enter The Wastelands,” Advance quickly bumps up the BPM and the electro-infused innovation with another incredible melody that eventually breaks way for the vocals. As separated parts…I dig this song; together combined they’re a little more like sunshine & rain…they can go together, but you might feel like they were more enjoyable on their own. I mean…you kinda have to look at it in several ways…cause there is a LOT of great things happening here from the electro-beats to the added synths pulsing away…it’s another monster of a song at nearly six-and-a-half minutes long – and really it feels like about ten songs strung together somehow.

But I guess what I’m saying is that it must be NICE to be so blessed with the ability to write & create hooks so strong you can just go right ahead and include, like, TEN in any given song! “Enter The Wastelands” certainly gets a merit award for stacking the deck in its favour…it’d be impossible to not like at the very least, a little piece of this song somewhere – ONE of those hooks is bound to pull you in! Advance carries on stronger than ever into “Dead Technology,” with blazingly-paced electro that flickers like a strobe light…and when the words come in, you’ll get some of the strongest melodies from the vocal flow up to this point on the album in another wickedly smart piece of Perrett’s writing.

“New Objective” returns to that stomping beat that really hasn’t had a chance to have felt left behind yet as it starts out. As cohesive as all of these tunes are, it’s those similarities that will take a nearly two-hour album into the risk of losing our attention if they don’t pull out enough creativity throughout the songs as they play through. And again…I’d be hard-pressed to find a single tune from Advance that there isn’t at least a part I dig tremendously…”New Objective,” at least to me, is an example of a track that might have had a chance to standout more than it does had it not been for the tracks leading up to it. It gives a reviewer a little bit of worry when being about to embark on the journey of the album’s longest song “Divine Machines…”

…but there it is! I think this song was exactly what the album needed right now to break it free from typical convention and into different territory. Largely dominated by an absolutely frantic electro-beat, “Divine Machines” makes fantastic use of vocal samples, space and atmosphere. Towards its middle as the madness spreads out, things become perfectly clear and each element is brought out to contribute its maximum to your speakers. A necessary departure to keep the ears listening through this extended set of songs from Advance – “Divine Machines” almost has an extra-advantage in standing out in comparison to what we’ve heard so far on the record – but the truth is that this is a completely stand-out cut. Assembled perfectly, intense, massively versatile & thoroughly dynamic – “Divine Machines” is a real winner…especially as the electro scatters around towards the end…this cut gets more awesome the longer it plays.

“Break The Silence” sees Perrett’s beautiful return…and you SEE? We appreciate him more now that we’ve had a short (lol) break. Coming back into another powerful performance loaded with mystical melody and brimming with confidence, “Break The Silence” uses amazing sounds through vocal filters and clever writing reveals different, innovative parts as the seconds tick along. Big when it needs to be, small and silent when it calls for it – “Break The Silence” is a very smart piece of electro. Both this tune and the next called “When We Return” carry a real new-wave feel to the music…the days of New Order, Erasure, A-Ha…this kind of era but with a darker twist to it all. Again recalling imagery of battles, struggles, hope, despair…it’s not a particular inviting world that Advance live in, but it’s certainly an authentic one; time after time and track after track they continue to OWN their sound confidently to end this first half of the set.

I’m not exactly sure of that mind you…of course it’s all digital these days so I’m looking at a playlist of twenty-songs in a row…but that’s the moment where the originals end and the album begins to lead us into nearly exclusive remix-territory with the exception of a two originals hidden slyly towards the end. Well…I say originals meaning it’ll be the first time you hear them on this double-disc…one of them is actually a pretty slick cover tune you probably wouldn’t expect from Advance …but we’ll get to that…

As far as the remixes went…I found the ‘Terminal Defekt Remix’ of “Fractured Existence” gave this song a real electric feel to it and amped-up its intensity even further. That being said…it was great to hear the ‘Unity One Remix’ of this tune as well…cause all three of them worked out really strongly, confirming in many styles that this is a killer track no matter what spin you put on it. That’s a real testament to the writing in Advance …they translate their ideas to multiple mixes & remixes with ease as a result.

Most improved? I dunno…I look at remixes as different entities as best I can…but if I had to choose, the ‘IIOIOIOII Remix’ of “Enter The Wastelands” got a little more out of the song if you were to ask me. The atmosphere is a little more haunting…the passion and conviction in Perrett’s voice breaks through more solidly even…yeah…I’d probably choose that one as my ‘most improved’ during this second half…maybe not the number-one most improved…but damn close. Cuts like “The Road (Atomzero Remix)” and “Weapon Of Choice (nTTx Blacklight Remix)” didn’t really standout as improved or dragged backwards…I think these two tracks might just be two of the songs that didn’t resonate quite as strongly with me in this set comparatively to the others in any of the versions, so I felt a little indifferent when it comes right down to these first remixes I suppose. Though…kind of have to admit that the ultra-electro, jazzy-feel added to “Weapon Of Choice” in the ‘Binary Division Remix’ was pretty damn exceptional and probably ended up being my favourite version of this tune.

Of ALL of the remixes though…there’s NO DOUBT in my mind that the ‘most improved’ award TRULY belongs to the ‘Ocean Black Ocean Remix’ of “When We Return.” This is a highlight not just on the album, but truly in my YEAR of listening to music; the incredible atmosphere, new samples and new approach to this tune is a gorgeously melancholy and brilliant perspective that I can’t tell you enough about what a privilege it is to listen to. One of the remixes that really flexes some of the most noticeable twists, the song’s subtle-nature also makes the rubbery-electro & bouncy version of “The Road” come to life and standout 10% more than its preceding versions.

Two new songs added in towards the end of this double-feature are “Apathy” and “Frozen.” At a speed almost faster than the rest of the album, “Apathy” rips by extremely quickly in a ripping blaze of electro-pop fury before taking us into a cover of none other than Madonna as Advance puts their spin on her single “Frozen.” Does it work? Again…testament to a great song…Madonna’s “Frozen” works well for Advance in their version here and they’ve managed to fit this somber-song right into their own energy and style flawlessly.

“Dead Technology (2k15 Mix)” puts the final beats into your ears as you begin to ponder daylight again, remember it a little, and start to wonder if the sunshine is still outside. Much like coming out of a movie-theatre into the midday sun – it takes a while to get the grip on your day WITHOUT Advance after spending nearly 1/12th of it with them in total. “Dead Technology” gets a rad makeover with an extra added shot of life through what sounds like a real human pulse running through the track…and overall, it’s another great choice to end this mammoth album on one of its proven-to-be-stronger tunes.

It’s a lot to take in during one sitting…I’ll say that. But I’ll also say that it’s not exactly like Advance is feeding you vanilla-flavoured electro all day either…this double-disc is all-kinds of electro-neopolitan!

Find out more from their label at: https://www.facebook.com/analoguetrashofficial