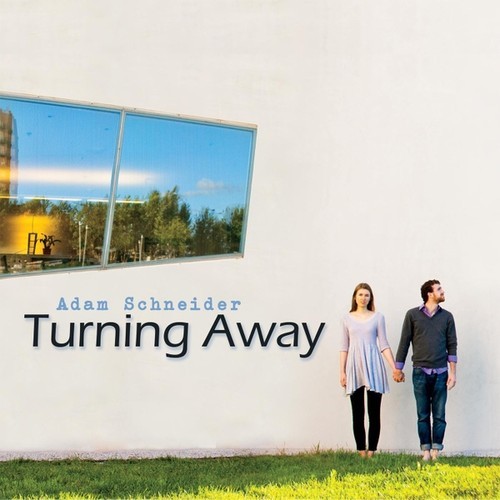 I’ve been excited to get to this new album after talking briefly with its creator over the screens of the internet. About his music – Adam is one of my favorite things – excited! From what I’ve heard on this new album Turning Away, he has plenty of reason to be; not only does he have a point of view, but he’s managed to convey that through some excellent songwriting. In an album that is full of diversity in both thoughts and rhythm – Adam Schneider will no doubt find himself with more people turning ON to his music, rather than Turning Away…

First of all…if you’re going to communicate – use a beautiful voice like this. Tracks like “Free Dimensional,” “Our Lies” and “Heels Of Judgement,” go a very long way in establishing Adam’s beautifully melodic songwriting. At times, he reminds me of the male-side of Zero 7’s sound…you know, the guy that’s NOT Sia…and at many times through the soft-sides of the guitar-work, can remind me of bands like Toad The Wet Sprocket. Even in those moments of comparison – it’s impossible to argue that Adam isn’t going his own route; each song carries an indelible style from track to track that hold unmistakable qualities you’ll only find in Adam’s work.

“Give It The Light” – another perfect example of his ability to mix-up the light & dark elements of life through this popped-up tune, juxtaposed against his metaphorical lyricism. It’s an extremely catchy tune and yet another side of this singer/songwriter that seems to be taking shape in an evolutionary way as the album plays on… It gives way to a soft-melodic & truly beautiful break in the album in the form of “Aging Me.” In this truly self-reflective tune, you can really feel Adam take hold of the important notes in words he wants you to hear, and he delivers another fantastic performance – especially as the track builds towards the end.

In another twist from the musical-side – Schneider descends into a theatrical-style blues-rock jazz-jam in an overall interesting choice in the song “We.” Whereas many of the songs felt more personalized through the ambiguity of the writing – this one almost seems more directed at a larger concept of ‘us,’ but described through his own personalization.

Did ANYONE follow what I just said? I’m not sure if I got it RIGHT mind you – but that’s what I’m hearing. Again – the wonderful ambiguous style that Adam writes in really allows for your own personal meanings to drive his songs as well as the one he’s intended. What I continually find myself respecting and admiring as I play through Turning Away – is the constant aspect of just how unafraid Adam is to take chances. He’ll venture out on new vocal melodies – sometimes even somewhat jarring at first…until you find the beautiful musical-meadows his music can take you into. Towards the end of the album – “Stand” is another highlight and another example of exactly what I mean here. It’s a sweet song – and an empowering one through both the music and the lyrics. There’s an audible-hope somehow…I don’t know…MORE realized in this track you don’t always find in Adam’s sentiment.

“Turning Away,” the title track about social inequalities and our own reactions to them…to seeing the very elements that define us, as well as the ones we’ve chosen to leave behind. To turn away from. It’s a heavy, heavy song…again finding contrast against one of the most fantastically-written and melodic pieces of music on Turning Away. There’s no doubt about the amount of work put into the writing of this album – it’s something you can easily hear in both the music and the lyrics.

And there’s no doubt whatsoever about whether or not we’ll hear more from Adam Schneider in the future…I guarantee you will.