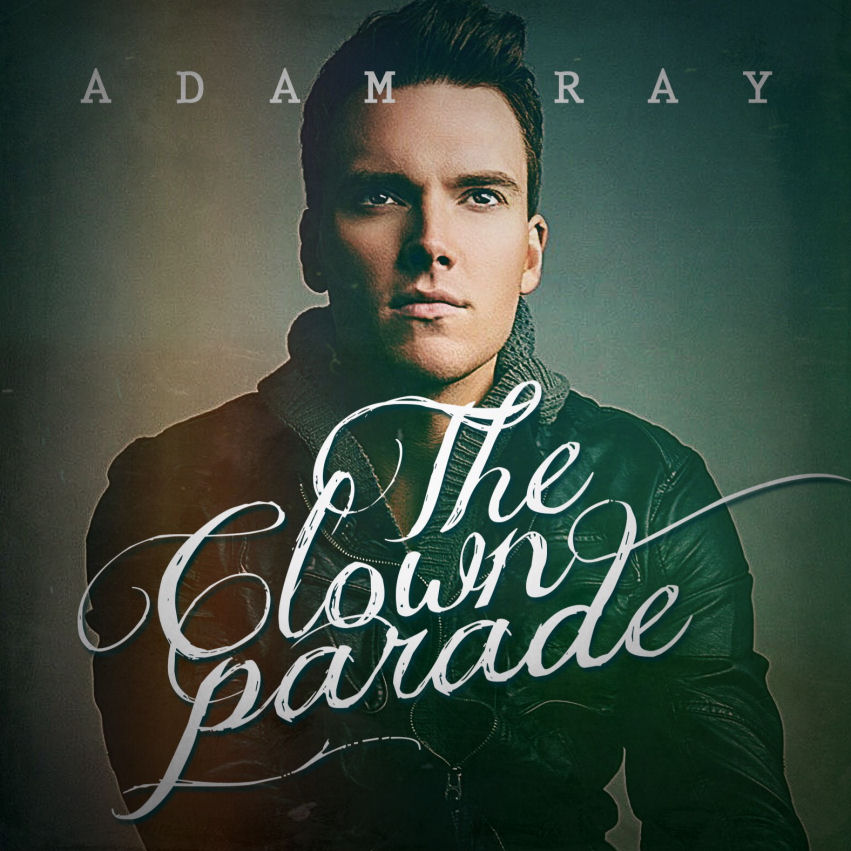 I’m not just talking about braving the pages of the internet here at sleepingbagstudios by handing us a country-album to pick apart…that pales in comparison to the struggles and obstacles I’m sure that Adam Ray has overcome in order to get this music to us all here today on his new album The Clown Parade. This man records songs written straight from his own heart and soul and has absolutely created memorable melodies here on this new album proving that a person can not only overcome adversity, but truly rise above it all to help inspire the rest of us.

Adam Ray is a gay man from Missouri…an a-typical representation of the southern-states with a backbone rooted deep in their heterosexual perspectives and religion. Growing up in a place like this would be more than tough; but upon listening to this new album, no argument can be made against the sheer fact that Ray has come out on top clearly victorious in the story of his own life. No matter the odds he’s faced, the taunting that he’s no doubt endured…he’s turned all that pain and emotion into audio-gold of triumph. I respect the story; but I’ve always been about equality to begin with and support all of Adam Ray’s rights & freedoms as much as my own…it was the music that needed to truly impress me, and it absolutely has…even for country!

It’s so much more REAL than what typically comes out of Nashville song-writers that I really think they should start moving to Missouri if this is the sound coming out of there. Honestly, where the plastic invades song-writers daily placing them squarely in the sea-of-sameness, Adam Ray has taken a different approach to his writing by doing all that writing on his OWN. What a crazy concept right? Take that Grammy-Awards – this is the work of one man, and it radiates talent all throughout in a real display of crossover sounds that have managed to pull even my own grizzled-beard in successfully.

I mean…he had me at hello really. The “Intro” to The Clown Parade is just spectacularly beautiful and really set the mood for the music to follow in a sparkling & fascinating way. Demonstrating solid modern-country sound on “Missouri,” Adam Ray writes about love in an honest, genuine way that really feels real. I suppose that’s what I’m saying…were he to have based himself in Nashville, they would have already inserted about 200 clichès into his song. They would have homogenized him in all the wrong ways. This is a beautiful song as he’s written and performed it, great strings, great melody and it doesn’t feel like I need to give my dog back, find my shotgun or another beer.

It’s clean, honest country-music infused with a modern-pop/soul sound through Adam’s vocals; he’s a very powerful singer. Emotions that resemble the powerful tunes of someone like Damien Rice, “Battle” is the song that hit me early on in the album, demonstrating Ray’s ability to connect through music and write some extremely beautiful and emotionally-captivating music. If you don’t believe it by then, there’s a good chance that “Addison” will do it. Actually – scrap that…if you’re NOT convinced by the time “Addison” finishes the very first verse your ears are broken. It’s a melancholy and spectacular display of real, raw emotion that someone can only communicate this honestly because they truly feel it. For you aspiring song-writers out there…Adam Ray has written you a fantastically-clear playbook here…these are the notes you need to pass the test. With delivery that’s challenging and convincing, he nails this one with perfect tone & genuine emotion.

Now…picking on the country-music genre as a whole for a second…Adam Ray’s “My Love Is The Best” is an example of a true hit-single that would absolutely KILL in this genre right now. And THAT being said, this song is about as ‘country’ as my regular music playlists; as in, it’s just not. Do NOT let the southern-drawl fool you for even a moment; this is as pop as it gets. And then THAT being said – it’s also an incredible highlight on this album…I know I’m not typically a country-music guy anyhow, but the added enthusiasm & energy in Adam here is completely translated into music that really speaks to everyone here in a real crossover.

Listen to “Wendy” though…you might actually think of some of the real classic writers like Elton John on a song like this, or again through “Addison.” That’s about the highest compliment I think can be paid to a real song-writer out there; I might not be the world’s biggest Elton John fan either, but dammit can I recognize an unbelievable song-writer when I hear one time and again. Adam Ray has limitless potential when it comes to that; he has an unbelievable understanding of melody, timing and clever hooks that work authentically.

Both “Hurricane” and “The Fall,” are incredibly atmospheric tunes that put the dramatics, theatrics and vibrant dynamics of Adam Ray’s music at the forefront. Excellent ideas once again, really BIG songs here all complete with the excellent lyrics and immaculately-convincing performances from Adam. He’s the kind of artist that makes me scratch my head in wonder and ponder how in the all-hell I haven’t heard of him already…this guy cracks the bat and hits it out of the park on every single song. To be honest, again, I’m not so positive that either of these two songs truly qualify as what my ears consider to be country-music, but I’m all about these moments where Adam takes his wagon off the trail into new-musical territory. He makes it incredibly cohesive through his tone, emotion and performance and never loses his own sound even as he ventures into new ideas.

Slowing it down for “The Painter,” Ray goes into one of the best performances he’s put onto this impressive album so far. Delivering this one with that 10% extra against a melancholy string-set, his lyrics will break you apart while his tone screams redemption. No matter how sad this song might get…the tone in his voice is inspirational…you can hear a spirit in this song of a man that has never given up and never will.

“Loaded Gun” brings in the rhythm and funk into country-music. Playing around with a light & danceable vibe…this is close to something that you’d hear on the later albums of Better Than Ezra. This is another hit (not that there hasn’t been 9 previously ALREADY) you can’t deny. Excellent guitar in this song and the vocal flow is just insanely catchy; in a moment of true-vertigo or the music moving me…I’m actually convinced I’m bouncing up and down in the chair as I’m writing this. Not even kidding. It’s a profoundly bizarre experience that I’m having right now, I’m not going to lie to you…this is completely real. If I’m not in the hospital at the end of this song, then that was simply the biology in me telling me that everything was actually MORE than right…

Looks like I’m okay. Maybe I’ve just been staring at the screen too long…but I’ve got lots to say here when it comes to the music of Adam Ray; it really has been a more-than-impressive experience. “A Single Word” brings down the tempo but never drops the melody and innovation. I LOVE…so much…the fact that so many of these songs and sounds are so different than those I’ve typically heard in country before…or any genre for that matter. Inspiring as ever, between the third & fourth minute of this song, you can’t help but fall in love with this guy’s song-writing; he’s killin it.

“To And Fro” brings out the gift of Adam Ray’s ability to translate experience into song once again in a moment of emotion you can genuinely feel. You really experience these songs from his uncanny ability to bring out the authentic tones to match the mood and feel of the lyrics. He’s an artist with the power to take you right there with him and into these intense feelings & emotions convincingly every time.

And by that golden-rule…he strips it all back and bares his soul one last time on the album’s title-track “The Clown Parade.” The confidence he displays in the vocals have made me a strong-supporter and absolute fan throughout the album, but honestly this last song makes me want to stand up in my chair and fucking cheer out loud for Adam. He should be beaming radiantly for nailing every aspect of this album 100% of the way through; I’m not even remotely ashamed to admit that I’d listen to this, even coming from outside of the country-music genre as I am. This is music that makes me proud to represent what’s happening out there in the independent music scene in all genres. We ALL have something beautiful in common…and the connection I’ve formed to Adam’s music is all the proof I’ll ever need about the real strength & power of song-writing that can transcend all genres and pull you in closely no matter what you listen to on a regular basis.

Check it out for yourself – it’s beautiful: https://itunes.apple.com/us/album/the-clown-parade/id973231713