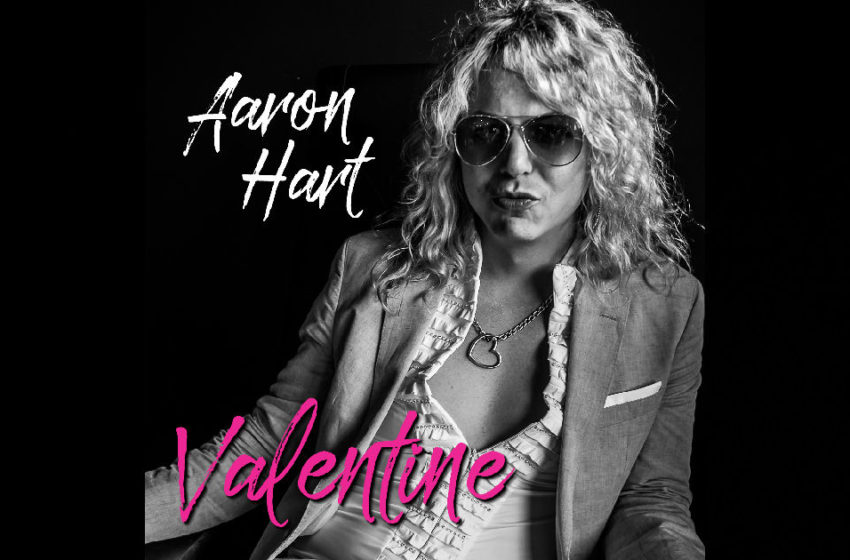 You get two guesses as to when the official release date for this EP occurred this year but that’s it.

Aaron Hart, taking a minute or two outside of his main project in the Denver-based Glam Rock band Love Stallion, hauled out a set of three heartfelt solo piano songs, dialing back the bombastic tendencies & fist-pumping sounds of Hair tunes in favor of a more tenderized & melodically-driven moment in time.  As I’ve mentioned at these pages over the years…it can be extremely tough to house all of what you’d want to do as a musician inside the confines of one band, especially in the case of something like Love Stallion with its adherence to a defined Glam Rock style…it’s only natural that an artist like Aaron would have something more to say or contribute that might not fully fit under that one umbrella.  And so, as an artist, you save those tunes for a rainy day…songs kept in the back pocket until the timing is right…whatever the reason may be…a solo record is often an indication that there’s more music inside someone looking for a way to get it out into the world, and potentially a whole different side of them.

Now…while all this might be just theories…I’d be willing to bet it applies to Aaron; I’m no expert on the music of Love Stallion, but from what I have seen & heard so far, what he’s created on his Valentine EP is decidedly different from what you’d normally hear from the guy in his main project.  What’s more than clear in either project, the man can definitely sing & write a solid tune…Aaron’s not gonna let ya down in that department.  It all becomes about what your own personal taste is more suited to; fans of Love Stallion will likely find their way to Hart’s music to check out what’s going on…their curiosity is nearly a given when it comes to that…but for those of us on the outside of the Glam Rock scene, there’s probably more access to Hart’s heart & soul on this solo record in this stripped-down & beautifully melodic form.

Like right from the drop on “Green Light” you can hear the songwriter in this guy.  Love the piano at all times throughout this first tune, I think he’s done an exceptional job on the melody that runs through the veins of the music here that handles & harnesses the emotions that come with it perfectly.  While that might appear like something that should almost always be the case…I’d argue it can depend…sometimes those emotions can overtake the moment; Aaron displays professional control at all times.  He’s still gonna reach for some really, really high-up notes which will take him right to the threshold of what you’d want in such an intimate & isolated sound…but they generally fit here well; they draw on his natural skillset & sound and reveal multiple highlights in what he can bring to the microphone.  He uses his vocals in really smart ways to enhance the meaning of his words and punctuate the emotion behind them with the way he chooses to sing each line.  Best way I can put it is…I think Hart has no real issues with the big notes and I think he’s certainly used to going all-the-way after them…but here in this particular setting, it’s the most subdued moments of “Green Light” that, to me, came out sounding the most humble, real, and stunningly subtle.  In any event, no matter if you’re an existing fan or brand-new one, I think all ears will admire the extremely invitational and gorgeous sound of “Green Light” as it starts the Valentine EP…highly welcoming and attention-grabbing, even with its minimal ingredients.  The moment that “Green Light” began, I knew this would be the kind of EP I’d want to sincerely sit down and listen to…that it’s the kind of writing & performance combo that warrants that time in isolation, just listening to what Aaron’s come up with, shutting out the rest of the world, and finding a home within this new record to nest inside of, curl up, and just enjoy.  There’s a sweetness in the sound & sentiment of “Green Light” that instantly connects & speaks to the soul; lyrically, it’s fantastic…the whole vibe really enhances that magic of like…that moment where an artist is going for it, make or break, before it’s too late…searching for that “Green Light” of confirmation from somewhere.  So you get this like…tale that Aaron creates within the storyline of the song…that you kind of have to wonder about & ponder whether it echoes some of his own personal story; it might be written around the tale of someone else – but much of this story might apply to him as well.  If it doesn’t and I’m wrong about all of this, bonus points to him, “Green Light” feels lyrically grounded & realistic.

What I really like, is that I couldn’t say definitively one way or the other as to whether or not this EP gets ‘stronger’ with each track – I think they’re ALL extremely strong tunes, as delicate as they may appear.  Like, the pace and space in “Fairytales” is nearly as effective as anything else you’ll hear from Aaron or the music – not an ounce of disrespect in that comment, that’s full-support for his grip on songwriting & how to use sound effectively.  His movement throughout “Fairytales” is downright captivating; whether he’s singing or playing or just letting the notes ring out into the atmosphere surrounding him, your ears are glued to this extremely clever composition.  While I know there’s still a tune to come that’ll reveal what I love best about Hart’s vocals on this EP – when it comes to the writing and what I personally love in his music…there’s a great chance that “Fairytales” would be the track I’d tell people to listen to first to get an idea of why that really is.  Like it’s almost mind-blowing when you listen to how this song came out; listen to the potential for how many places it could have been messed up!  All that exquisite space that exists in “Fairytales” that makes it so uniquely exceptional and truly captivating…I mean…you add a bass-line, a drumbeat, a trumpet – whatever – you add anything at all, and it would completely fracture or damage just how wonderful this song really is.  It’s not just what he adds to “Fairytales” – it’s what he doesn’t – you feel me?  That’s where you get a real glimpse into just how much thought & care has been put into these songs – Aaron gives you exactly what this melancholy melody sincerely needed…the movement is emotional, pensive, tense…and remarkably crafted & well-controlled.  Hart sings this one with soul & melody you can hear, the piano is once again crystalline-perfection in sound…I love everything I hear & everything that I don’t – words cannot express just how much respect I have for a song like this that dares to be so spare in so many ways, yet so absolutely full from concept to execution.

What I think I can say…is that for me, the struggle between choosing a favorite between “Green Light” and “Fairytales” might take some back & forth and talking-out to decide…but I’d probably have to argue as well that “Valentine” was likely my favorite of the bunch, just by the slightest of margins.  Like, look…I don’t want anyone out there to get me wrong – Hart can sing…many singers can sing – but there’s a special connection that you can really hear in a singer to their music when they’ve found a way to maximize every second of its potential and really connect with the emotion that’s been written into it.  “Valentine” has that…and for me, that’s what gives it the edge.  Hart does a noteworthy job on “Green Light” and “Fairytales” – but it’s “Valentine” that truly captures the magic & mastery of his expression & emotion the most throughout its melody when it comes to his vocals.  And I ain’t gonna lie to ya…something tells me, he knows that every bit as much as I do…he’s a great songwriter; I can only imagine that when it comes to the design or performance of any of Hart’s tunes that he knows right where he wants to take it…and this song has all the emotional weight & impact you’d want in a song.  To his credit – if it was the kind of switch we could all just throw at any moment, I’m sure we all would; the fact of the matter is that the melody he’s tapped into on this final track is much more of a rare gem in that sense.  Not elusive to a writer & performer like Hart, but more rare to us all, in general.  Best way it can really be put it is that “Valentine” contains that magic that makes music special and a completely sensory experience, full-stop.  Cohesive in themes too…if you listen to the lyrics of “Valentine,” you find similar threads to what’s happening in the first track as well…a lot of the storyline of love that you’ll discover on this record alludes to trying to hang on to a star that’s burning so brightly you can’t quite hang onto it.  Definitely heavier emotions on “Valentine” as Hart takes you further into the heart of this story than ever before, ultimately having to come to grips with the reality of the situation, rather than become a full part of it, as perhaps intended at one time long ago when the relationship first began.  “Valentine” contains a beautiful moment of power & uplifting sound that starts around the three-minute mark, putting a whole different twist on the emotions & sound, while also likely revealing the most important details in what Aaron wants to say & express on this song before it ends.

Dude gets a thumbs-up of solid approval from me.  I know that tenderized moments in time like this will always have to battle harder to get the attention of the masses for the most-part, but I also think that the Valentine EP is a full set of three cohesive songs that’ll really make an impact on those listening.  Hart proves he’s got a lot more to offer as an artist & musician…he’s clearly got that songwriter’s gift and likely requires multiple outlets to express it all – and I think people will be really glad he chose an immaculate setting like solo piano songs to release a lil’ bit more of his heart & soul into this world.

Find out more about Aaron Hart from his official page at Facebook here:  https://www.facebook.com/aaronhart77music