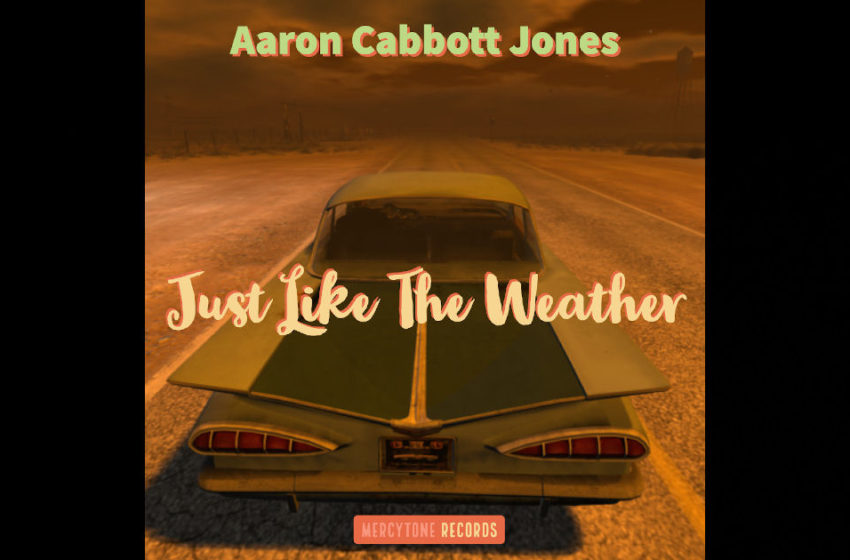 I mean, how’s a guy supposed to resist the slick groove that runs through his new single “Just Like The Weather?”  HOW?

Last time we ran into Aaron was in February of last year with the release of his album The Adventures Of Aaron Cabott Jones – back already with a stellar new single, it’s comforting to know those adventures continue on!  Strongly I might add – there’s more than enough swagger & style in this one tune for you to fill your boots & take’em out to the dance-floor to put’em to use.  Everything comes out so ‘in the pocket’ here, know what I mean?  This is a completely comforting groove that Aaron’s locked into here.

Believe it or not…I can shed some light on exactly why that is.  Hopefully you believe it, lord knows I try to be informative around this shack of ours online.  Anyhow…in the conversation I briefly had with Aaron, in reference to “Just Like The Weather,” he mentioned:  “It’s a bluesy / country rock thing.  I’m not usually country leaning but it’s the way the song surfaced.  So, rather than make it something it’s not, I followed the song into what it is.”

And now for just a moment, I want you to all go back and re-read what he said.  I want that to sink in.

The reason as to WHY I want you to do that, is because I want you to hear the results of that approach and what’s truly achieved when it’s applied sincerely when you listen to “Just Like The Weather.”  I could go on & on about my theories about how when you hear an artist that’s right where they’re meant to be, that you hear it – but why preach it to ya when you could listen?  Listening to the sheer level of comfort in the flow, rhythm, transitions, and overall execution throughout “Just Like The Weather” is all the confirmation your ears will need to know that this theory is correct.  Call it Bluesy, Country-fied, Groove-Rock…call it whatever ya like – whatever it is, it certainly suits Aaron Cabott Jones.

All of these assessments are correct mind-you…no matter what you hear as the dominant trait of the song, it’s gonna sound great, that I can tell ya.  Personally to me, I think I’m picking up on those classic grooves & Blues-Rock vibes a bit more than the Country aspect…BUT…I ain’t sayin’ that I can’t hear what he’s talking about, I can.  Country definitely still has a presence here in “Just Like The Weather” as well.  Aaron’s played this smart though…over the course of listening to this cut on repeat, I really got a chance to appreciate just how much key elements like the bass-lines play in the movement, how much the keys bring to the energy & atmosphere, and really dig on the added charisma that the guitars supply to this single.  Like for real – between how crystal clear this whole vibe translates and how smooth Aaron’s vocals come through to complement the music of this cut, I must’ve let it spin a dozen or more times in a row just lettin’ this groove work it’s magic.  Ain’t a single second of this tune that doesn’t invite you to listen to the rest right afterwards…”Just Like The Weather” all comes together with Aaron’s A-game on display from the music to the microphone – THAT is the effect of going where the music takes you.  What you’ll hear on “Just Like The Weather” is a universally appealing sound – Cabott Jones included – you can tell he’s into every moment of this single too, as he should be, this is all-out good-times.

Or at least it appears to be – at first.  So much so on the surface, that you might actually not catch the wicked story that’s being told in the lyricism at first!  Or at second, or third, and so on – you get the point, that’s how supremely slick this rhythmic roll through “Just Like The Weather” really is when it comes to the music…and what can you do?  Like what you like, hear what you hear – that’s the beauty of spinning a tune several times and enjoying the experience over & over ain’t it?  You absorb different things out of it every time you listen.  While the insatiable groove of this single might very well be the dominant trait overall – it’s a role well-earned, and it’ll give you the chance to absorb this twisted tale of early love even more over time as you come back to this catchy cut to spin it again.  And believe me – when you get right into what’s being sung on “Just Like The Weather,” this track will take on a whole other layer or set of meanings for ya – I know that’s the effect it had on me!  Like I said…everything on the surface shimmers & shines so much that it’s like that magician’s trick of sleight of hand almost…you really gotta keep your eye on the full picture of what’s happening or you’ll miss something severely important.  In the case of this song, because there’s so much flash & cool in the sound of the vocals & music of “Just Like The Weather,” it might take a couple of plays or so before someone realizes they’re nearly listening to a Fatal Attraction like story!  Alright, alright…it might not go QUITE that far…but I mean…we got people being locked in trunks, we got lies, deception, and even the police gettin’ involved…so make no mistake, there is a LOT to unpack in the lyrics of “Just Like The Weather,” and depending on who YOU are & how you hear it, you might get something totally different out of it.  For some, this will be a dedicated tale of love – for others, they’ll probably hear it like I do…there’s definitely a bit of a stalker-like vibe goin’ on once the lady in the story has moved onto the next dude and things…hmmm…let’s just say continue on from there.  Like I mentioned – SOMEONE ends up in a trunk at some point, someone gets arrested – this tale gets WILD, straight-up…and that bridge…that BRIDGE…something about that one spot on the song mixes such a brilliant blend of haunting feelings & emotion that it always stood out as possibly sweet, possibly creepy…and I never really felt like if I could tell if it was just one of those things, or both!

What I can tell ya for sure, is that Aaron’s crafted a killer tune here.  “Just Like The Weather” is a hell of a lot of fun to listen to, and the more you dig into it, the more you’ll discover, every time – I can pretty much guarantee that.  From the hooks to the storyline, music to vocals – Aaron’s made the most of this tune and come up with something genuinely entertaining that will either grip you for the sound or for the details in the lyrics…either way you slice it, it’s a solid checkmark in the win-column for this cool cat.

Find out more about Aaron Cabott Jones at his official pages below!