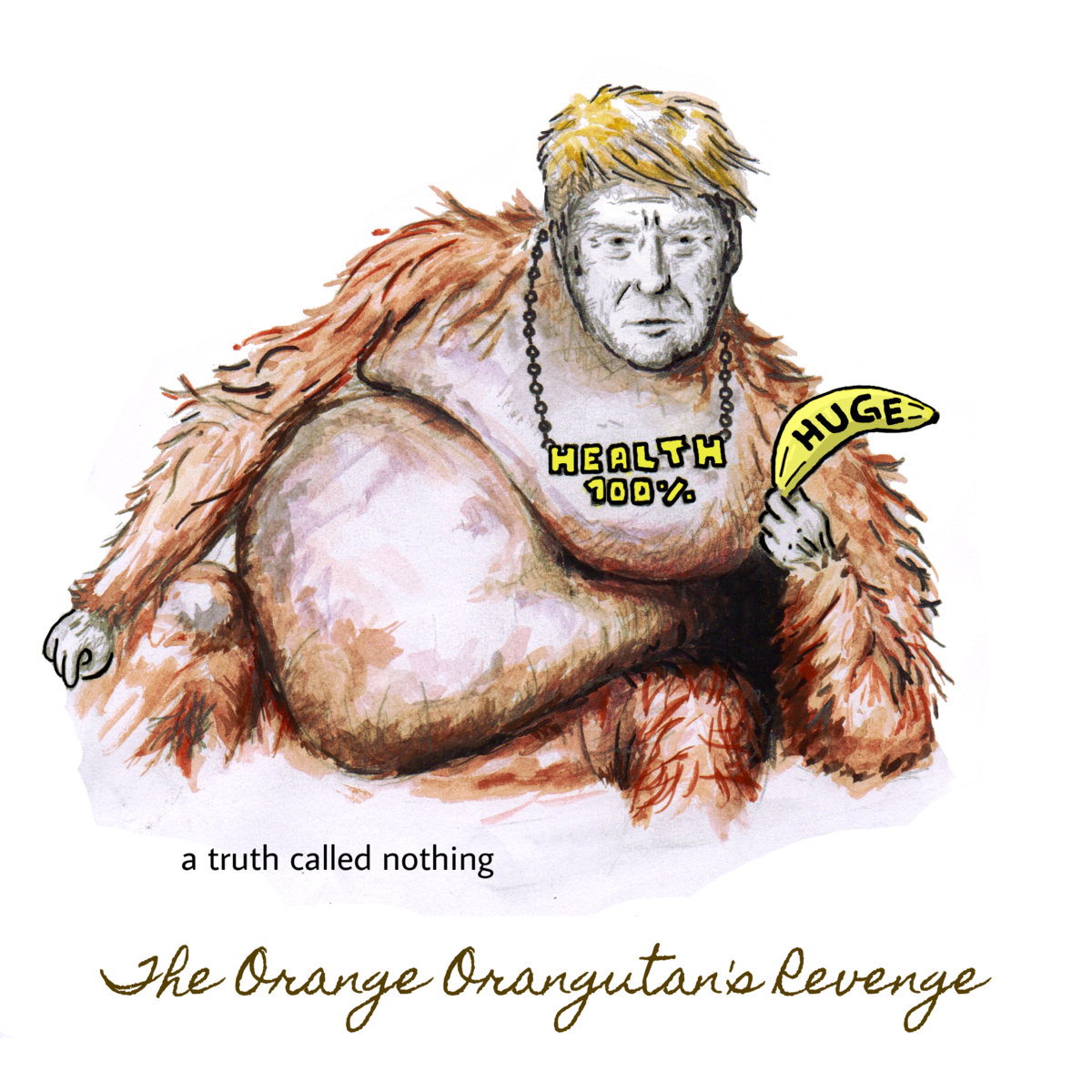 A Truth Called Nothing – The Orange Orangutan’s Revenge – EP Review

Well…just as I’d felt in the music of their last record and made predictions about A Truth Called Nothing – they’ve held true to their end of the bargain by continually keeping us guessing about which direction, twist & turn will come to them next.  Easily one of the most impressive & impactful bands I’ve heard throughout 2016 – this band from Stockholm, Sweden is compelling to listen to and completely exciting to my ears with all their dynamic ideas.  It wasn’t all that long ago that they impressed me big-time with their album Sluggerhand – and they’re back to do it again with completely new sounds, songs and innovative ideas combined on The Orange Orangutan’s Revenge EP.

I’m mixed on the subject matter.  Not because I don’t like records that comment politically or socially – that’s not the case – I love those…and this is indeed one of those statement-making kind of recordings.  I’m just sad for them in general…in the sense that even a million-miles away safely based in Sweden that a single square-inch of their minds or time have had to consider, think of and worry about the actions of Donald freakin Trump.  As you can tell by the title, The Orange Orangutan’s Revenge, we at least know we’re on the same side of the fence when it comes to this megalomaniacal idiot…and as much as I’d like to get through a day myself where I’m not considering or thinking about the actions of said-idiot – I can’t either.  So why not spend the regular time I’d be wasting on Trump by kicking him in the ass through the wild ideas and music of A Truth Called Nothing?  Seems like a damn good idea to me and a much better use of my own personal headspace.

Besides…the people behind the music of A Truth Called Nothing are human-beings as well…and thankfully, they don’t spend this entire recording on debating the antics of The Orange Orangutan in question.  Three of these tunes come from the last record, Sluggerhand, but remixed into all-new stages of their own existence in boldly alternative versions.  Some of these ideas…get pretty fuckin’ wild…and what you think you might have heard before on titles you recognize become completely different ideas and really clever versions that sound refreshed and entirely new.

The only issue that tends to creep into songs we write where we really have something to say is sometimes we can try to cram a bit too much in the words to make our point as brutally clear as possible.  I think there’s a tiny bit of that in the opening/title-track “The Orange Orangutan’s Revenge” in the verse…you can hear the scramble to hit the metering correctly – but in fairness, A Truth Called Nothing succeeds in getting there.  And if you want to talk about how to bring out the power in a chorus – this is definitely a band that understands how to bring it up that extra level.  Right from the outset of junior Marco Rubio’s idiotic talking-point that begins to the song and the electro-energy that slowly pulses before raging into a full-on overload of melody and power in the chorus – “The Orange Orangutan’s Revenge” is a riotous explosion with real payoffs in the writing.  Sick solos, wicked samples and the point is completely made through the perfect description of Trump’s campaign in the chorus: “This embarrassing Mussolini routine” – couldn’t have said it better myself.

The three tracks on the inside of the five in total are the songs pulled, remixed & reworked from their last album Sluggerhand.  For those familiar with the record – you’ll immediately hear the depth of the departure and commitment to making these songs all-new again through the ’30 CM Spikes Remix’ of “Someone Better.”  In a way…it’s kind of like they took the meat out of this sandwich.  In another way…it’s more like they just added more meat to it.  How’s THAT for a description?  I suppose what I’m saying is that “Someone Better” is hollowed-out and carved from its original idea into something much more hypnotic and electro-infused.  A little more club & dub, if you will.  The original melody in the vocals occasionally drifts in to connect the idea…but this first remix already shows you just how far A Truth Called Nothing was willing to go to make their old-ideas completely new again.

The most recognizable of the three songs from the past comes in the form of “Song To Rock” – which I actually think was a really great idea to include a second-time around.  It’s still a variation of the original – but for the most part, this song’s structure is kept fairly intact and effects are more relied upon to create that real difference in sound we hear.  Now…with all that being said…”Song To Rock” is just a really, really good fucking song…and having it come roaring back even more vibrantly here on this EP was like a musical hi-five or someone you know doing you a solid.  I’ve really appreciated the theatrics and dynamics of the strong ideas that A Truth Called Nothing creates…and I really think they took a song that I underappreciated the first time around and put it right back into my face where it belongs.  “Song To Rock” sounds thicker, bolder, meaner and more straight to-yer-face than its original form on the last album – I think the tweaks they’ve made to this one speak strongly to the fact that you should never give up on a song until you’ve got it just the way you want it.  The added power in the sound of “Song To Rock (Version)” should have them feeling plenty satisfied & stoked about the end result on this EP.

Perhaps my favorite remix of the three though…is “My Old Friend (Monkeyfinger Remix)” – because this is about as extreme of a change as you can get in a song and these ideas are executed with flawless precision.  They’ll make you question that fact upon hearing it the first time around…if you’re anything like me, you’ll assume that the internet itself is completely breaking apart just after a minute into this song when the rhythm & melody we knew from Sluggerhand is broken-up and taken a hatchet to in a glitch-filled spectacular moment.  Great editing here on the “My Old Friend (Monkeyfinger Remix)” and the depth/enormity of the sound of the second-half is larger than LIFE.  Very much like a Nine Inch Nails style to the tone and layers of depth that form the brutalizing and scathing electro-sounds…and the switch into it is as powerful as it gets in a transition that was insightfully creative and pulled off with professional skill.

The last-cut and final all-new track on the EP “Never Apologize, Never Explain” starts out in a nearly Knight Rider-esque arpeggio-style synth sound as it builds.  Good throwback to the new-wave sound but still modern as all-hell…the gigantic bursts of energy that A Truth Called Nothing bring to their choruses always takes the band into their own signature terrain.  Love the combination of sound in the layers that make up the chorus and I think the bridge that nears the two-minutes was a fantastic addition to “Never Apologize, Never Explain.”  This band switches between parts, ideas and sounds like it’s simply NBD at any time – ever; their transitions are electrifying and flawless…something that really marvels the ears because quite often, like on “Never Apologize, Never Explain” the dramatic differences between sounds you’d think would lead to a much more jagged movement – but A Truth Called Nothing continues to impress with just how professional they can be, even when they’re up to the craziest of their antics like they are here on The Orange Orangutan’s Revenge EP.  Solid all the way through & refreshingly innovative – this band is right at the top of my shortlist for Best New Sound this year, they’re insanely creative and completely fantastic.

Find out more about A Truth Called Nothing through their official links below!