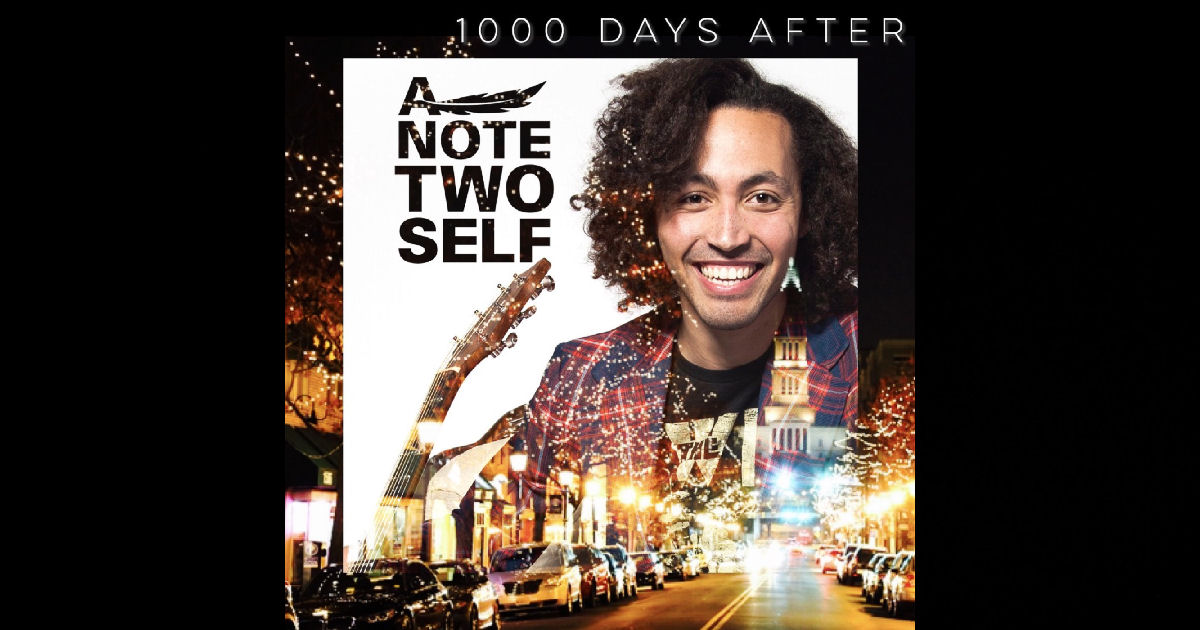 A Note Two Self – 1000 Days After EP Sampler/Singles Review

If the cover of this new 1000 Days After EP from A Note Two Self is any indication, things are going pretty well for the man behind the music right now – that’s one seriously genuine smile you’ll see on Mike Richards’ face right there.  You gotta figure something special has put him in such a good mood – and chances are, it’s that well-earned satisfaction an artist gets to feel after finally getting that new record out there…especially if it’s been a while!  That appears to be the case here with the 1000 Days After EP…A Note Two Self released a live record online in 2015…before that, looks like this project was going by the name of The Offset if I’m not mistaken, which also has an album out there called Jeans To The Wedding, released even further back in 2013.  But ya don’t end up here about six years later down the road without a purpose…and when the music you make never completely leaves you no matter how much life can get in the way…when it keeps on pulling you back, well, I like to think there’s a reason.  So let’s find out what’s happening here in a sample set from Michael’s new record…let’s see if we can figure out what it is that keeps him coming back to push record & what 1000 Days After has to offer us.

Sure sounds like it too – his soulful voice is likely the first element of his music to make an impact on ya as you listen to “When You Sing” and his new EP begins.  It’s quite a well-written & unique love-song he’s got here…smooth sound & inviting vibes, all that stuff is good – but lyrically, you’ll definitely see/hear what’s gonna help set this guy apart from the rest of what’s out there.  To sum it up…as best I can from the theories I’ve got goin’ on here…ultimately, “When You Sing” is a song of tribute, respect, and admiration.  Written around a specific special someone, Michael details the memories of what makes this person so remarkable – and wouldn’t you know it – a lot of it actually takes place inside of music itself!  “When You Sing,” if I’m not mistaken here…is almost an ode to the way this particular girl would sing for him at some point in the past…more than likely in the 90’s somewhere if I was guessing by the list of artists/bands that get referenced in this tune from 1000 Days After.  No matter when the timeline…the point is that the story itself, and the way it’s written, reveal there’s an authentic perspective, an artistic point of view, and a poetic soul in Richards…and songs like “When You Sing” have him expressing that all at a really high-caliber level with blissfully vibrant & colorful sound.  It’s kinda got that whole like…Hootie & The Blowfish/Matchbox 20-era style/sound to it…big choruses, bright sound, beautiful lyrics & sentiment…all that good stuff ya love is there, & he does a fantastic job with his soulful vocals on the mic – A Note Two Self comes out with a sweet & solid first impression here for sure.  You can literally and audibly hear this man embracing the freedom of expression…very inspiring to hear.

Loving the opening riff of “Wisconsin Fair,” especially when that harmonic note gets nailed perfectly right at the beginning of this song…A Note Two Self definitely has a gift for finding completely inviting ways of pulling you into the music.  I like a lot of the lyrics he’s got goin’ on in this tune as well…there are a couple of points where you can see he’s searching for that word to complete the rhyme-scheme – probably the only spot where I’d advise some caution to this guy.  Takes longer of course to master the technique of finding the perfect words without compromising what you really want to say in exchange for making a song easier to sing…but it’s always worth it to build towards that skill…because not every rhyme is going to pack the sincerity it should.  It’s a trap that just about 95% of singers out there get trapped into, but arguably, something that’s not as important to the people listening – what they’ll hear are the hooks and the soulful sound of Michael singing this tune…and there’s not a thing wrong with that.  Just all depends on what kind of singer/songwriter he personally wants to be, what challenges he wants to face & overcome as an artist, and whether or not he wants to dive a little deeper than any rhyme scheme could potentially allow.  Scheme’s such a horrendous word…I wish there was a better one…makes it sound like A Note Two Self is trying to pull one over on ya…I assure you, there’s no trickery here, no gimmicks…and for what it’s worth, I do think he is being as sincere as possible.  I think there are probably a couple words or two that he had to search for rather than naturally finding them through his specific thoughts or feelings…but I think he’s chosen the ones that closest represent what all that is, inside of this love-song set in the “Wisconsin Fair.”  Love the keyboard solo, that’s essential – the drums are solid, the acoustic guitar is stoic, bold, and delicate whenever it needs to be.  Musically, everything’s perfectly in-line here and harnesses a genuinely uplifting energy that provides an additional thread of hope in the music while A Note Two Self as Richards sings the nostalgia into the heart of this tune.  I really dig on how big this song becomes…I think a lot of people will be surprised at just how expanded & expressive this idea ends up…and you’ll definitely hear a ton of highlights from Michael’s vocals – he’s got a ton of passion as a singer that consistently comes through powerful notes & tones.

Three-for-three as far as I’m concerned…and as far as the whole invitational-sound-thing he’s consistently had at the beginning of these tunes, somehow it all gets even more enticing through the sound of the EP’s final song, “1000 Days.”  LISTEN to this chorus will ya?  I don’t want to say that this is basically exactly what I was just referring to lyrically when talking about “Wisconsin Fair” – but…well…I mean, it IS…this is definitely what I meant by all that…and the results here in that moment, completely hit home.  When he gets to the chorus…this is where I feel like we’re likely heard the truest line that Michael might have sung to us so far – or ever for that matter – and it’s as heartbreaking & stunning as it is sweet & loving.  Just a couple of lines for him to sing, but so entirely effective and you feel like this is exactly what he wanted to express and exactly how he wanted to say it.  So believe it or not, the sincerity factor goes up even higher on “1000 Days” – this does end up feeling more like it came straight out of him as opposed to an well-crafted tune that’s more designed to grab you with what’s known to have worked in the past.  Every time this song kicks-in to gear, I honestly marvel at what incredibly rich and spectacularly soulful sound Michael has in his voice; every time it transitions, I’m amazed at the fluid & flawless way that A Note Two Self is capable of such impressive melodies.  C’MON though people – right around the 1:40 mark…when you hear him deliver that chorus so beautifully, then come surging back into the next verse with an entirely new gear & energy…I’m just sayin’ – A Note Two Self clearly raises the stakes before the very end of the EP with “1000 Days” – it’s a seriously powerful song and I don’t think you could have asked a single thing more from Michael or the band playing along with him.  They nail this from the lead to the background, and create an absolutely memorable moment in time as a result…I can’t say enough about the chorus of this song or the way Richards sings it…the rest of the song too for that matter really; it’s innovative, it’s artistic…it’s pretty much all the things I love in a sweet song and a whole lot more.  Certainly sounds like he’s on the right path to my ears…A Note Two Self houses a significant amount of skill and a whole lotta heart – and it makes for an exceptional listen.

Find out more about A Note Two Self at the official homepage at:  https://anotetwoself.com