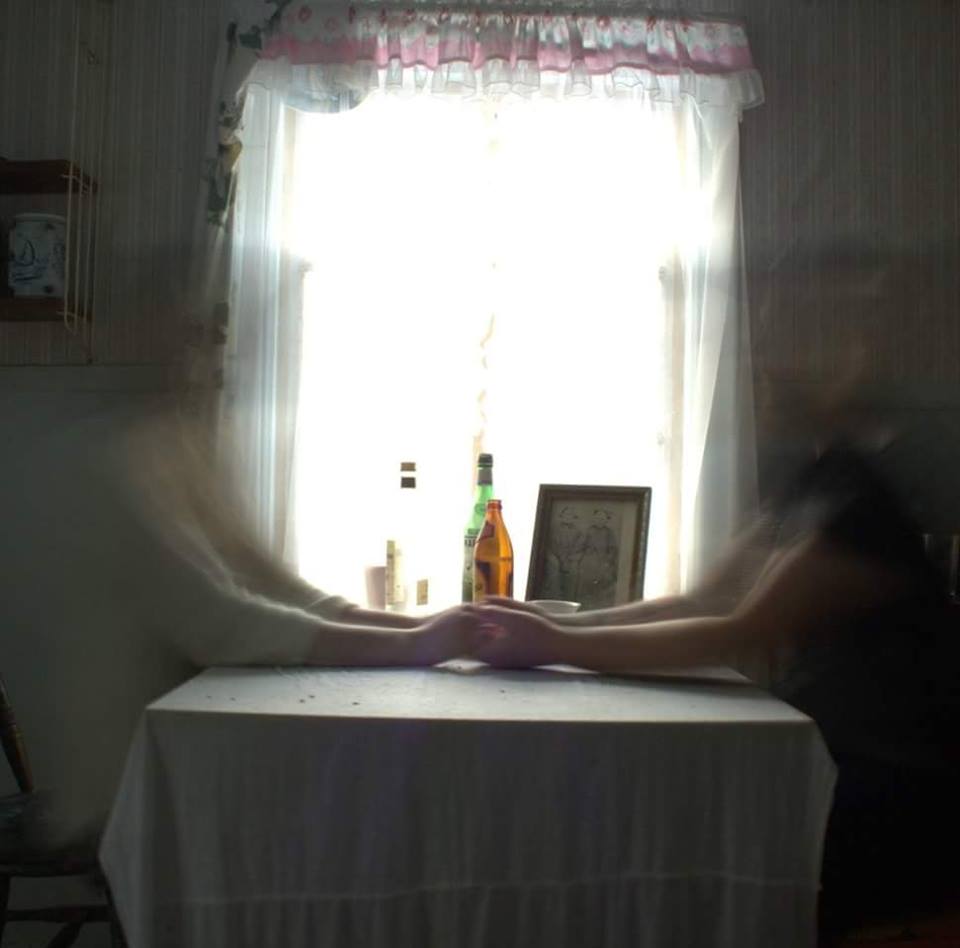 Way, way back about this time two-years ago, I had the good fortune to have experienced the songwriting of A Choir Of Ghost’s James Auger in a different project he’d called Dead Wood.  If you have a read-over of that review…you’ll see the visible proof of just how much I already believed in him and his music then – and since then, he’s gone on to exceed all expectations, releasing what I honestly think is still one of the most brilliant songs I’ve ever heard in my lifetime called “Ester” last year officially in his new project, A Choir Of Ghosts.  I’ll put it to you this way…I’m here to review the two latest cuts on the official Soundcloud page called “Saint” and “Woods,” yet at least 75% of the times I’ve heard them I’ve also let the list run-on into “Ester” to listen to that as well.  It’s all relevant in the sense that Auger not only raised the bar of expectations on what we’d hear from him on this next time out – but also relevant in the sense that he flat-out raised the bar in the entire independent folk-music scene with his single “Ester.”  Like chasing the dragon…he’s had me listening intently for that magic in everything I’ve listened to since…which has again led me to realize just how stunning, exceptional and rare the writing of James Auger truly is.  When you feel like I do about “Ester” and realize it’s taken 37 years on Earth to find a track like that…it’s hard to believe that there could be another one directly around the corner right?

It’s in saying all that…that I actually think he’s played his return extremely cleverly through a revisit to his past; taking a song from the Dead Wood catalog, the new version of “Saint” from A Choir Of Ghosts took the seeds of a great idea and let them fully bloom.  Again, if you look back to that past review on the Dead Wood original, you’ll see it was a song I enjoyed to begin with – but it’s undeniably evolved and smoothed-out on this new take of “Saint.”  Whereby before I’d compared the approach to something closer to Stephen Malkmus from Pavement…this time that looseness is long gone, and replaced by heartfelt-sincerity & genuine emotion that grows a lot closer to the warm, comforting and intimate pop-acoustic ballads by Coldplay at the heights of their sweetest-intentions.  Auger sings this tune as perfectly and authentically as you could hope to hear…you really hear him connect to the emotion in the words he writes – and it’s the way that he mimics these emotions musically in A Choir Of Ghosts that reveal how focused he’s become as an artist to make sure that each and every moment truly shine.  From the gentle percussion and violin-strings that flow sweetly into the mix with the acoustic guitars, to the powerful amount of passion he’s put behind the words – everything about “Saint” is completely inviting to listen to and as comforting as a hug at the time you need one most.  Love the pacing on this song…it’s got a beautiful, audible charm to it all and wonderful new balance between the music & lyrics on this new version from A Choir Of Ghosts.

As far as I can tell…there’s more to A Choir Of Ghosts here on these new tunes as well…you can hear the evolution in the sound through “Woods” even more clearly as the drums and violins find even more of a presence to create a pretty thunderous atmosphere within the realm of folk-music.  I’m a huge fan of the lyricism in A Choir Of Ghosts…I really am…but I have to admit, sometimes it’s interesting to listen to something you really like and try to imagine if anyone else could pull it off the same way, know what I mean?  I think that’s really part of the magic with A Choir Of Ghosts…I just don’t think the realness and sincerity of the way that Auger sings his songs is something that could be easily duplicated whatsoever; that’s the kind of connection between vocals and lyrics that only happens via really finding that focus, conviction and confidence in the material that makes every moment captivating and believable.  I firmly believe that Auger understands that it’s more than just about the words an artist can write, but very much as well about the way they’re sung…and that without that genuine connection being something tangible we can identify and hear for ourselves, many intentions and potentially great songs have been lost along the way throughout music’s history or even worse, become mediocre versions of ideas once brilliant.  “Woods” is another stunning example of putting personality, character, heart and authentic emotions together perfectly in the vocals from the lead to the backup-vocals and clever choices of effects/mix on them throughout the song.  Melody in the vocals really takes the spotlight as “Woods” continues to evolve, even at its most intense moments…but what I found in this tune that really nailed it for me was that the increased presence of the beauty in the violins and roar of the drums into the music really added strengths from all angles…not only is the idea itself a seriously strong one, but the execution and mix on all-fronts really came to life on “Woods.”  It COULD have something to do with “Woods” being technically the first ‘new’ track from A Choir Of Ghosts since “Ester” – but I genuinely believe it was much more than that which led to this song getting better and better with repeat listens – “Woods” is another tremendously well assembled, structured and deeply imaginative tune in their growing catalog.

I continue to stand by my remarks from way-back-when about the stunning quality of the writing/music James Auger makes and its immense potential for YOU to love what you hear just as much as I do.

So do the right thing – support A Choir Of Ghosts at the official Facebook page:  https://www.facebook.com/achoirofghosts/