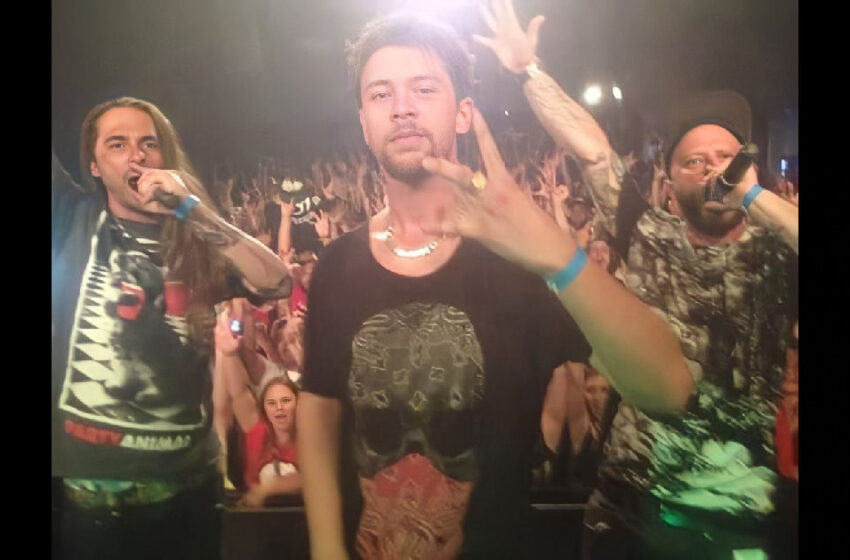 Dude’s already got all that love coming in from all corners of the world, tens of thousands of hits on his videos like “Empty” at Facebook since its release five years ago – and somehow we’ve ended up on this page for some…feedback?  The general consensus has already been put in by many out there brother-man…but sure, if confirmation is what you’re seeking out, I can do that too I suppose.  So let’s tell ya more about what you already know, given that everyone out there would have told ya anything I’d tell ya by now already.  Or perhaps there’s a different message that needs to be sent in reviewing 4Sayken…

Of the two tracks I’ve got here, I’m more inclined to side with “Empty” as being 100% – so we’ll start there, and then I’ll bust some philosophical shit by the end of my rants on these songs from 4Sayken.  Honestly, this cut is rad as all hell if you ask me – I love the song, I love the video – I love the clear passion that 4Sayken has for the craft on display from sight to sound if I’m being entirely real with ya.  Now…obviously, “Empty” deals with some harder-than-hard times thematically…the kind of stuff you can tell is entirely based on real-life…and there’s no doubt that what the man’s put together here ain’t gonna stack up to the happiest cut you’re gonna hear in his catalog, now, or in the future either for that matter.  Anyhow – no one needs to keep things upbeat in that regard here – I’m just looking for what’s REAL, and “Empty” is completely that from start to finish.  4Sayken has got the gift of speed AND precision too!  I know what you’re thinking…isn’t it just one or the other that you need to get by as a rapper these days?  Isn’t it detrimental to have BOTH of those amazing talents at once?  Contrary to popular sites, radio-stations, and industry titans belief, these two incredible aspects of rapping CAN exist together and be quite the combination – in fact, I’d argue that 4Sayken is pretty much a one-man force to be reckoned with on the m-i-c when he’s cruising at full-speed with such crystal clarity in every word.  To me, this is the kind of deep cut that instantly cracks a homerun on a first listen – the rest of the spins you give it simply make the experience that much better…I don’t need music to be on the happy side of sound to want to turn it up – I want quality, I want substance, I want gritty realness…”Empty” has ALL of that & more.  4Sayken makes it plenty clear that he’s got some issues to work through…and hell, I’m just as alright with that too – that’s what music is for on many levels…catharsis…healing…therapy – use it for everything it can give you, and you’ll come out stronger as a result.  As I’ve said many times on these pages of ours throughout the years in some way, shape, or form – it’s making tracks like “Empty” that allow artists like 4Sayken to be able to even make another one some day…you’ve gotta get through pain like this in order to come out stronger on the other side and in shape to get to whatever comes next.  It all checks out here though – great music, powerful content, undeniable skills, real gritty, raw & relatable themes.

“You Owe” was put out about two years after “Empty,” which makes that about three years ago now – follow me?  Oddly enough, it’s got more attention & love from you incredible people tuning in around the world than “Empty” did too…which…well…once again makes what I’m doing here remarkably redundant now don’t it?  4Sayken must have me confused for someone out there that’s born to rub nuts – but that’s ain’t me homies…I just call things how I see’em & how I hear’em, pass or fail, with zero fucks given, ever.  I give out the tough love, and remind you to get out there in the cypher where you belong.  Obviously my main concern right now is that the guy’s got all this talent and all this love being shown from around the world, and we’re promoting tracks from three years ago?  Bro?  I’m trying desperately to figure out what it is I’m missing here…all I know is that if I had 4Sayken’s talents and ability to rap, that’s exactly what I’d be doing, 24/7…and I’m scratching my head as to what could be keeping him from doing that.  Never mind the skills you can hear on tracks like “Empty” or “You Owe” – anyone out there would be able to hear those if I’m being honest with ya…they’re that apparent – but LOOK at the videos this dude has put together too will ya?  Clearly he was more than willing, ready, and able to put the work in at some point along the way…and wherever that version of 4Sayken has gone, that’s the one we’ve got to wake up again and get him moving at a similar speed to what he used to be.  Because C’MON y’all…this dude spits hot fire!  The verses of “You Owe” are straight-up award worthy – his rhythm and flow are insanely good…not only does it all come out of his face at a million miles an hour in terms of speed, but the content is just as supremely kickass too if you’re listening to his lyricism.  So yes – the skills are not only there – they’re a level beyond what most rappers out there are even capable of…the kind of skills you quit your day job for, and pursue this music thing with everything you got.  I’d say that maybe that’s just my perspective on it, but everything 4Sayken’s put out has way more hits, likes, loves, views, and clicks than anything I’ll do by the time that I’m worm-food & six-feet under – and I’ve been doin’ my shit for more than a decade now.  So we can talk about how life gets in the way this way or that…or the pandemic era caused this new obstacle or that one…we can talk about how success is only defined by MILLIONS of dollars, or perhaps it’s all about having just enough to be happy doing what you love…all I’m saying is, don’t come at me trying to convince me that 4Sayken shouldn’t be doing what he was born to do full-time…the possibilities on how to do that are endless if you’re willing to put in  the work.  Everything I’ve seen, heard, and experienced tells me he’s not afraid of rolling up his sleeves and getting it done, so let’s get after it homie, it’s quarter past real late in getting things moving.

“If we did all the things we are capable of, we would literally astound ourselves.”  #IamTHATdude.  I AM the guy that will hunt down your most kickass and inspiring quotes and remind you about who you REALLY are – and challenge you to live up to the sentiment.  Why NOT be astounded all day long bro?  That’s a pretty kickass way to go about living life every day, ain’t it?  I’m way fucking old now, but I do remember way back when, realizing I had a choice to be completely miserable every day working in the business of what was basically a commercialized laundry delivery service, or I could get mad enough, get crazy enough, and get creative enough to find my way out of the 9-5 and make life into what I wanted it to be.  I don’t drive a Maserati…maybe one day I will.  I don’t own a mansion with seven pools and thirteen & a half bathrooms…maybe one day I will.  I don’t have a basketball court in the backyard or a private movie viewing theatre in my home either…maybe one day I will.  If I choose to go after any of that, I’m always confident I can make that happen.  Priority #1 was finding a way to do what I loved every single damn day on earth – and like I said, I’m more than a decade in now after trading away a completely cushy job in for what is really, ‘just enough’ in every sense of the definition.  Just enough to keep me workin’ – just enough to keep me happy – just enough to make me want to do it all again tomorrow.  So yeah…I get it…music reviews are probably supposed to concentrate on the music and all that – but clearly, 4Sayken arrived at these pages of ours with something more on his mind than merely someone else telling him how great he is, which again, for the record, he is.  I might not be IN LOVE with the hooks for “You Owe,” but other than that, I’ve been 100% down with everything else I’ve heard from the guy – in fact, to borrow HIS OWN choice of words, I’ve been ASTOUNDED by the natural talent he has.  I’ve met a bunch of talented folks in this lifetime though…and the majority of them get outhustled by people with lesser talents and more work ethic…those ready to sacrifice every single minute of the day they’ve got until they get themselves to where they wanna go…and I feel like 4Sayken needs to ask himself the question about whether or not he’s really got THAT amount of drive in him for the battle ahead.  If he does, which he should, fuckin’ fantastic – he’ll make it…and if not, there’s a good chance he’s got a couple of great songs here that have done what they were meant to do already by the time they got here on these pages of ours, and he might be already halfway to retiring as an artist by now.  And to be completely fair to the guy, in the world outside of Facebook, on his other sites like Bandcamp where he’s put out albums in each of the past two years, or YouTube where he’s got tons of content goin’ on, he’s plenty active and crushin’ it with collaborations & whatnot…the potential is more than there, and the world is ultimately his for the taking.  So do yourself a favor 4Sayken…forget about ALL of us for a moment…close your eyes, and picture what it is you’d be doing if you were just left to your own devices…no likes, no thumbs-ups, no love emojis – just whatever it is that’d make YOU happy my dude…and if that’s music, then get back into the studio on the regular where you BELONG, get those skills of yours back in action as they should be, sharpen up the focus and the work regimen, find a way to be doing what you love every single minute of every single day, and keep that new music flowing in a way that makes you every bit as proud of it as what you’ve accomplished in the past at the top of your game.

Find out more about 4Sayken at his official website at:  https://www.4sayken.com