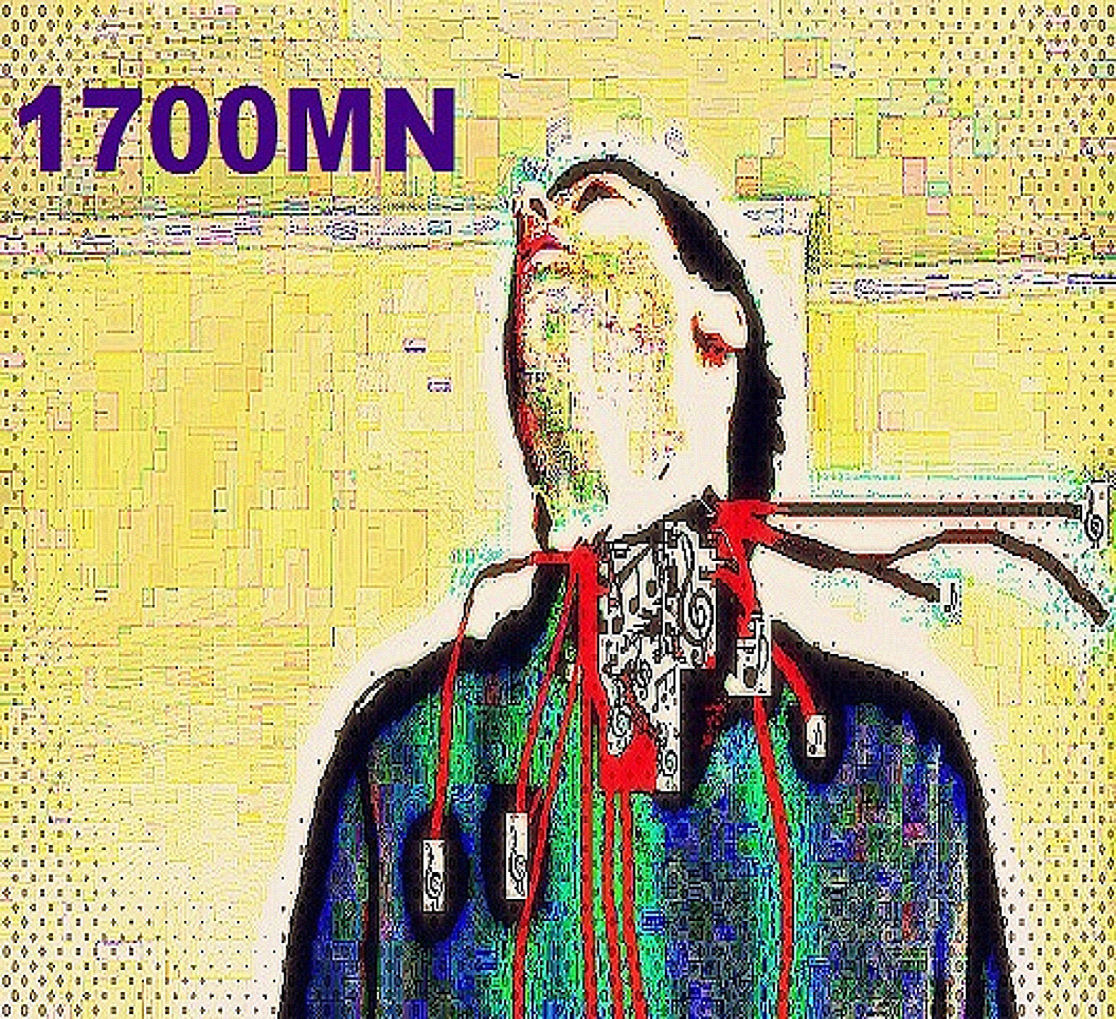 1700MN – Know That Music Is My Lifeblood – Album Review

Nearly six-months since we last checked in on 1700MN, Ed Purchla’s creative-outlet and music-project set deep within the realms of experimental-electro and the artistic soundscapes found only within the transmissions of his very own brainwaves…and somehow he manages to translate these incredible thoughts & audible-visions to life when he pushes record. We reviewed the lead-single “Ahb Seshun” from Know That Music Is My Lifeblood the last time around – and now we’ve got our ears around the entire album in its fully-expanded, mentally-frantic glory!

Not sure what I mean just yet? You will. “92597” starts this full-length experience with textured glitch-electro-shocks as the track/album begin; bringing in samples and sounds from every direction…the beat kicks-in slowly around a minute in before launching into a full-on frenzy of the electro-fantastic ninety-seconds in. Like a videogame on complete overload and stuck on one screen where someone has pressed not just a few, but ALL of the buttons…I gotta say, personally, I’m already loving this. “92597” drifts out and communicates its final transmissions before switching into “Damidgdguds.”  Not that you shouldn’t already have your volume-up already…but if you don’t, make sure you give it a good boost in the northwards direction for this inventive second-cut. “Damidgdguds” keeps the stuttered-shot madness of the electro on high-supply and the amount of twists & turns within this one less-than three-minute track is pretty much a mindblower as it flows seamlessly with its intrinsic-mechanics glitching and giving rebirth to the life, energy and direction of the song every…I dunno…ten-fifteen seconds? Less? Slightly more? You get the idea – “Damidgdguds” moves damn quickly!

Ed takes this project for a serious ride as Know That Music Is My Lifeblood pumps out a lengthy & complex-cut with “Eh.” I’m chuckling to myself with the realization that “Eh” might end up being the most ‘straight ahead’ of all the tunes on this new record…and that’s one hell of a twisted point-A to point-B! It does allow the ideas to expand a little further…nothing insane where you get trapped into the same sounds or music for more than thirty-seconds at a time, but you get to spend a bit more time with some of the incredibly diverse hooks that Ed’s created on “Eh.” You could count each separate hook as they pass by and it should easily take all the fingers on both your hands; 1700MN pushes through them all quite quickly in comparison to most…but when you have the ability to tap into this much unexplored terrain in music, I think you’d always be excited to find out what’s just around the corner and doing just like Ed is here on “Eh.”

“Ahb Seshun” continues your electro-euphoric experience through the new 1700MN album…and even I’d admit that though I’ve reviewed this one in the past, the sheer selection of sound and direction in this song generally keep much of what he’s doing sounding entirely new no matter how many times you hear these songs. Just like in the following-cut, “Hal Ohd Tha Phukk Owt” – there’s always something new for you to hear and experience through the intensity of choice and selection in Ed’s music. If you haven’t noticed the clever wordplay in these titles right now, make sure you’re playing along…it’s like the personalized license-plate game, only better! “Hal Ohd Tha Phukk Owt” makes solid use of space and percussive-elements and adds some wicked vocal-samples in towards the end. A littler darker perhaps in spots, a little creepier maybe…but still a song/sound that incorporates the immaculate production you’ll find upon any of the tracks on Know That Music Is My Lifeblood.

That tightness in the overall production, mix, mood and balance of chaos/mayhem that Ed has achieved is what tends to continually incite amazement throughout this record. So many edgy sounds and bursting, sharp-edits would come through typically disjointed or all-over-the-map when it comes to finding their place in the mix with almost any other indie-artist attempting these ambitions – but Ed’s got the experimental side of music down to a science. “Trayluvbredkrums” is a great example of a song that would NEED that just as much as it does the writing itself; the low-end dynamics, high-end frequencies and use of space create a massive contrast when you go to mix songs like these…for them all to have come out as ‘even’ in the mix as they have on this 1700MN album is really quite an achievement to be recognized. In the case of “Trayluvbredkrums” it also helps to be able to listen to some of these incredible sounds fully develop over their arc and get them truly right into the song…especially when that use of space is being exercised as much as it is here. “Trayluvbredkrums” is the longest cut on the record…but also by far the most wandering; it’s the kind of cut that when you think about its length in comparison to the rest of the tunes…and how many times that this changes…you kind of wonder what the driving-force is that compels Ed to call a track ‘done.’ This track could have been another two, perhaps three tracks on the record at 2-3 minutes apiece and I’m not sure that as listeners if we’d know the difference…and that’s what’s most fascinating to me about the length of “Trayluvbredkrums” – because for some reason…there IS a difference to Ed here and this whole gigantic set of minimalist-music gets kept together. I’d love to know the methods behind his madness!

“Dannsyng N’ Thuh Wayk Uv Anuthurr Passeeng Shadoh” begins a highlight-set of tunes that will fill the end of Know That Music Is My Lifeblood with a completely electrifying composition and sound-texture that completely captivates the ears from the moment it begins its electro-expressions. It’s a bold contrast in comparison to the slow, steadiness or “Trayluvbredkrums” just before it…and I think that really does a lot to make “Dannsyng N’ Thuh Wayk Uv Anuthurr Passeeng Shadoh” stand-out as much as it ends up doing. Not that I’m taking anything away from it whatsoever – I think it’s a real key switch in this record that begins to redefine the sound & direction of the record just slightly as it heads towards the end from here. The following track “Hissy Phyt” is exactly what I mean…you can hear the logical evolution and flow to these final tunes and how they follow each other. “Hissy Phyt” takes on from where the stunning sounds of “Dannsyng N’ Thuh Wayk Uv Anuthurr Passeeng Shadoh” leave you and into even more fantastic-meets-melodic electro-madness from there on. Impressively making use of space and sound once again, “Hissy Phyt” finds some of the most extraordinary breakdowns you’ll find on this record in addition to some of the brightest and most beautiful hooks as well buried within the layers of melodic musical-mayhem. Love the first major break around ninety-seconds in and the push back into the music from there incorporating a heavy beat and some truly inspired vocal-samples and like…I’m not quite sure…harp-sounds maybe? Whatever it is…the middle of “Hissy Phyt” certainly reveals some of the most genius moments on the album, especially between its second-third minutes where things get all-kinds of crazy, but so massively entertaining to the ears all at the same time.

The grip, rip & pull of the big-beat and low-end groove of “Phassyn8” is a real mover. I found every time I listened through this new album that this particular cut seemed to fly right by way too quickly each and every time. It’s 3.5 minutes-or-so long…it’s not lacking in length it’s just overdosing on awesomeness! Each part of “Phassyn8” seems to explode with inspirational burst of clever electro-patterns as it weaves through its structure and heads towards an ending that plows you straight into the ultimate wall of sound. After everything fires-off…like…not even kidding you – EVERYTHING…”Phassyn8” collapses and heads directly into the final track in a flawless transition to begin “N2THASUHN.” A rubbery set of sounds and relying mainly on his instincts for Drum N’ Bass-inspired electro – “N2THASUHN” rages through its percussive storm before breaking momentarily to reveal the light around 2:15 in…a moment that is SO GOOD that makes you wonder how Ed didn’t end up using or exploiting the sound much more throughout this final tune.

But largely…it’s the short-stuff that contains the real magic here in what happens in the music of 1700MN. As much as you or I or anyone else might like any one of the particular sounds on Know That Music Is My Lifeblood – no one sound…nothing at all really sticks around for very long before it’ll veer off to the next extraordinary sound or dynamic addition to the song. I’d think there’d be much more of a problem here if it wasn’t for the fact that Ed’s instincts seem to lead him to victory every time; he’s a serious explorer of time, space and sound and that is stunningly-clear upon this new 1700MN record.

Tags: 1700MN Album Know That Music Is My Lifeblood sleepingbagstudios