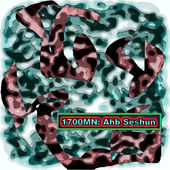 You kidding me? Over time, I might forget bands with names like The Wallflowers, Big Sugar, Muse…hell, even after a near-certain future spent battling alzheimer’s I’ll stand a chance at forgetting names like The Beatles and my favourites, The Cure – but it’s very unlikely you’ll find me on my deathbed not able to recall the name of the band in review today, 1700 Monkey Ninjas. They’re nearly impossible to forget through name alone, nevermind that 1700MN also makes wicked electro-music that’s not to be ignored either!

Somewhere around seven or eight months ago we reviewed the album You ARE The Storm from this experimental-electro project…discovering that there was a TON offered to the earholes from the music of 1700 Monkey Ninjas. Not to disappoint and already back on our pages on the inside of the same year – the electro-mayhem continues with the latest single “Ahb Seshun” from the upcoming album Know That Music Is My Lifeblood coming out…soon…towards the end of the year I believe…

If this first release is any indication whatsoever, we’ll be in for another wild, electro-ride full of madness in music taking place right at the edge of comprehension for most. Demonstrating the massive difference between IDM and EDM music once again – this is music to get the brain-juices & synapses flowing strong. If you feel the urge to ‘bust a move’ – you’d better do it quickly…IDM doesn’t tend to settle into any one groove for long. “Ahb Seshun” is no exception as it pulses & beats itself through an entire maze of electro-infused atmosphere & samples, all assembled into a captivating composition.

The vocal samples used are minimal, but incredibly effective; incomprehensible to the point where they have to be considered as another aspect of the music…they contribute just as much to this track as any beep, click, glitch or beat. Completely changing from start to finish, “Ahb Seshun” is definitely the kind of track to keep your attention and the switch at like…I think exactly two-minutes in…well…I could warn you but you’ll never be ready ENOUGH. The song finds itself at its most massive right at that moment…the kind of surprise that will instantly send a shockwave of electro-tingle down your spine. And if you’re anything like me…it’s moments like that which are guaranteed to put a smile on your face and warrant that repeat listening, time after time, year after year.

“Ahb Seshun” definitely gets me excited for the upcoming album from 1700 Monkey Ninjas…I think there’s a lot of innovation in the electro music 1700MN has put out. There’s no doubt whatsoever that the overall number of people out there that listen to this music is a very small fragment of that total-pie available out there…and to be truthful I don’t know that this new-single has any more ability to pull-in new listeners than any other song from the IDM or EDM genres from this or any other artist. There are a ton of electro-hooks to pull in the ears…too many for most I’d say, which in general is what I think keeps people away from these genres as opposed to flocking to them…because it takes WORK to listen to, and to assemble & create. There is music available for those that want to simply let something fade into the background and just ignore it…if your town is one of them old-fashioned types and still has that building with all them books in it…what do they call that thing? The library! Yeah…that! If your town has one of those still too, then more than likely they’ll carry some of the boring nearly non-existent music you’re looking for to help you sleep.

For the rest of us…the adventurous-minds…the creatures of late-night…the nocturnal or never-sleeping creatives…we’ve got music like 1700 Monkey Ninjas, the musical-equivalent of ten cups of coffee. “Ahb Seshun” is definitely another great electro-composition to add to the catalogue and a great indication of where 1700MN is heading to next on Know That Music Is My Lifeblood. Of course…now that I know there’s more music to come from 1700MN just around the corner, I want it NOW…and a wickedly-assembled frenetic single like “Ahb Seshun” only increases that desire X10 – can’t wait!