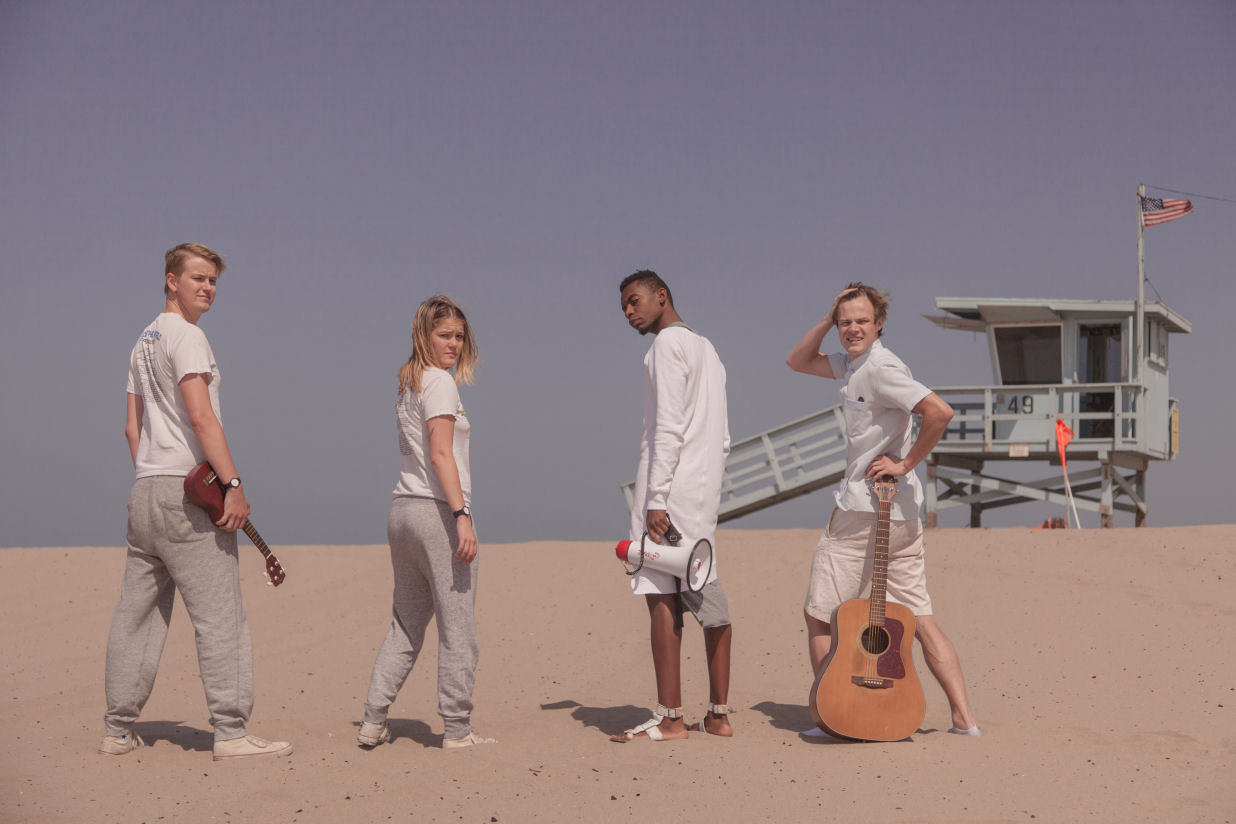 SBS:  My first question!  Thanks so much for taking the time to talk to us everyone!  I have to start is by asking why the band name is †he Chris†ian S†oners?

†he Chris†ian S†oners:  Our manager said it’s best to not answer this question.

SBS:  I had a hard time finding your music out there….so I want to get an idea for what you sound like… What bands over the years inspired you and what do you think inspired the sounds that you create today?

†he Chris†ian S†oners:  Each new day is an inspiration for us. Family is a big part of it – we ourselves feel like family, and our extended families are hugely important to us as people and musicians.

Kailee: Anytime I see someone on the street who is down in the dumps or acting negative – that’s a source of inspiration, like, wow, I wish I could cheer this human up. And, from that kernel of inspiration comes lyrics and tone.

SBS:  Tell me about the history of the band…how did you get started?  There are family members included within is there not?  Explain the relationship between you all…does it play a role in how your music comes out?

†he Chris†ian S†oners: Weston and Kailee are twins. Coleman and Dez are not. We are all friends.

SBS:  Coleman after doing my research I’ve seen that you play both guitar and bass – how does that work out when †he Chris†ian S†oners play live?

†he Chris†ian S†oners:  It doesn’t really, but that’s not exactly the point.

SBS:  I really hope I have this right…but Kailee Mcgee…you’re the drummer…and I if anything myself musically, I suppose I am a drummer somewhat… how long have you been behind the kit and how did you end up making that the instrument of choice?

†he Chris†ian S†oners:  It’s actually a captial “G” in my surname. I got into percussion because I can’t read music, so I’m not really capable of playing anything else. I grew up as a ballerina, so I have really good rhythm and it just happened.

SBS:  Kailee, who is your favorite drummer?

†he Chris†ian S†oners: That girl from The White Stripes is pretty good.

SBS:  Weston I have always liked the sound of the keys, I think it just really adds a full sound.  How long have you been playing your instrument and who are some of the people who inspire you?

SBS:  A question I have to ask is…I was born a twin as well – and I know all about the strong relationship that you develop with that other half…how does that play out when making the music in †he Chris†ian S†oners? Any advantages?  Disadvantages?  Psychic powers?

†he Chris†ian S†oners: We are best friends. Sometimes it’s intimidating to our other friends, even Coleman and Dez. But, we always have each other’s backs and it brings a solid foundation to the band. We are still working on the psychic powers…

SBS:  How often do you get together and rehearse?  Where does that take place and how do you have it set up?

†he Chris†ian S†oners: It’s a very spiritual process and an intimate space, so we want to keep a lid on answering this one as it’s best to keep it just between us and what moves us.

SBS:  What kind of things do you do for fun when you are not playing music?

†he Chris†ian S†oners: Scatch. Watch movies. Hang out at The Americana.

SBS:  For each member of †he Chris†ian S†oners …… and I know this is a hard question, but please pick one band and tell me why they are your favourite!

SBS:  I said earlier I had a hard time finding your music out in the internet-world, what steps have you taken to promote your music and the band so far?

†he Chris†ian S†oners: Facebook is our main promotional base right now. It’s super inspiring! We will expand in the future as things start to pick up!

SBS:  What was your favorite memory of a performance that you did as a group?

†he Chris†ian S†oners: Performing for sad and drunk republicans the night of Obama’s re-election at high tide down by the Ferris Wheel that one time.

SBS:  Out of every member in the group, who had the hardest time putting themselves out there on a stage, and what did you do to gain the confidence to overcome that stage-fright?

†he Chris†ian S†oners: Weston really loves being in front of the camera, but he does have a hard time with being on stage. Dez was born a performer.

SBS:  Tell me about your favorite concert of another band that you have seen?

COLEMAN:  I was having kind of a low time and I hadn’t really gotten in to music much beyond what I’d overheard coming out of other people’s Sony disc-man’s – and I’ll never forget this because it was the millennial new year, 1999, and I was alone eating pizza in my parents basement and I found this old VHS video cassette tape and I put it in and there it was, a grainy video of Peter & The Test Tube Babies singing “Banned From the Pubs.” It blew me away. I’ve still never heard the studio version of that song. That one performance is so personal, I pray I never will. When I saw that one guy singing and that other guy playing the red and blue guitar with a broken string (even though the video was in black and white I know the guitar was read and blue) I just had this huge feeling wash over me and even though I was alone I felt so connected to everyone else all over the world because the millennium was such a big deal. Everyone knew it was happening, and I just felt like “Hey, man. I’m here, now, with these guys playing this song, and that’s pretty great.” And I still think it’s pretty great that now I can be the guy in the black and white video playing the red and blue guitar and someone else will realize that he’s not alone too.

…thank you so much!  This is my first interview ever and it means a lot to me that you’d take the time to answer questions from a music-fan like myself.  Definitely looking forward to hearing the music once it’s all out there – make sure to send some our way!

For now…please accept this humble open floor…a space where you can say anything else at all that you’d like to!  Thanks again everyone…really appreciate it! – Ryan @ SBS