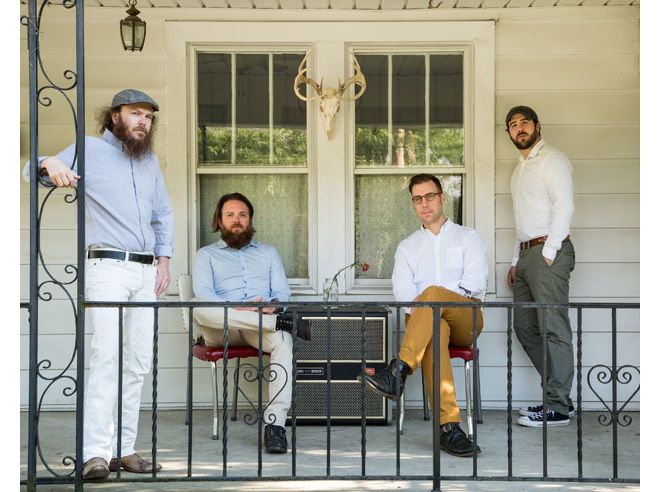 As some of you out there already know, I’ve been harassing people at random out there on the internet to bring some new interviews to the pages here and find out what’s up in the independent music-scene…our first victim of the month has officially responded!  Below you’ll find answers from Joshua P. James of Yellow Paper Planes…and yes, that same Yellow Paper Planes that I’ve been ranting about all year long due to their amazing material on their new album Building A Building, that Yellow Paper Planes.  Easily one of the album’s I’ve listened to most this year and highly recommend you treat your 2017 the same way – it’s always awesome to reach out into the random to a band you truly love & respect and they reach right back to give you a moment or two of their time in wordage.  I literally can’t say enough about this crew of talented players and stunningly-bearded dudes, they’re genuinely rad people that make completely awesome music…those are facts, not opinions.

Check out the new interview floating around out there this month for September and what Josh from YPP has to say!

SBS:  Wide open question for you – what sets you apart from the rest?

Josh:  It was 50 Cent who said in a recent interview regarding the current state of hip hop, “Once you decide to be yourself you offer something no one else can be.” It’s a good line. I don’t know how much that applies to band-centric rock n roll music as much as it might to an MC, but there’s something to that. We’re not combining anything that millions of bands before us have already worked out, but none of those four piece rock bands have ever had our perspective on it all.

SBS:  Name the person, place, artist, band or music that has inspired you the most in the past decade when it comes to YOUR own music?  What creates that inspiration in the influence and how does it translate into your art, music, life & career?

Josh:  Influences for me can be fleeting, but I can be influenced by any number of things; music, books, people-watching, my hyper-active sentimentality, conversations with old friends I haven’t seen in a while, an old t shirt in the bottom of the drawer that reminds me of that time somewhere other than here with people other than who I’m with at the moment. It’s all part of the influence pool, but the single most constant source of inspiration over the past decade has been my partner. That doesn’t seem like a very musical answer, but she is always my first filter and sounding board. I’m not sure I’d be able to access some of the subject matter and past experiences that end up in my songs, if I didn’t have someone like her backing my moves. It takes a certain strength of character to shack up with a songwriter who is writing songs about past experiences with other women from a chair in the corner of the bedroom you share or questioning whether or not to indulge any number of existential crises that could send a day or week into a cloud of solemnity.  She’s been around from the first solo songs I ever wrote (it was her that convinced me to go play my first open mic) to making records with Yellow Paper Planes and loading up in the tour vehicle to play shows in 30 some odd States at this point. I’m lucky to thud, thump and dance through life with someone who has always had that confidence in me.

SBS:  When it comes to your own sound in the music you create – what does it HAVE to HAVE for you to be satisfied with it and why?

Josh:  I would say from a definable “thing” standpoint, it doesn’t HAVE to have anything in particular. But it does HAVE to have everything feel right. We only know a song is done and worth a shit when it feels right to all of us.

SBS:  How do you go about expanding your own skillset, sound and experience?  Are you content to make more of the style of music you’re currently making or are you looking to branch-out, evolve or further refine it from this point?  Is it important to change or important to stay rooted in a similar sound over time when it comes to your fan-base & the music you write, play & record?  Why so or why not?

Josh:  I don’t feel strongly one way or the other on whether it is important for a band to change things up or stay true to established sounds. I personally am not interested in writing the same thing over and over again. I think I’m always trying to find new little tricks and twists to add to the songwriting palette, which is both a process of evolving and refinement. I tend to listen to music that probably wouldn’t be considered genre-related to YPP, so I think ideas seep in through exposure to a variety of styles of music, which can lead to branching out a bit. Sometimes traditional songwriters (which I would consider myself) can suffer from a form of confirmation bias. For instance it’s easy to fall in the trap of writing in the recognizable style of, say, a guy like Springsteen and then you get a Springsteen comparison in print or after a show and so you feel justified in working through Springsteen’s entire catalog every Sunday morning to become a better songwriter but you’re really just becoming a better Springsteen stylist. There’s comfort in predictability and direction, but that doesn’t interest me much.

SBS:  What does it take to write a ‘timeless’ tune?

Josh:  Absolutely no idea. Some combo of serendipity and chords that make sense together, probably oughta have a hook in there somewhere.

SBS:  How do you handle criticism?  Artists, bands, musicians of all kinds respond to it differently.  I know as a critic, when I head to a page and everything is all positive…unless that music is full-on amazing, it kind of sends us a red flag you know what I mean?  Of course you don’t want to scatter your page full of bad reviews and I get that – but it’s also undeniable that healthy criticism is natural and helps you grow.  Tell us how it’s benefitted you along the way & how you tend to handle it personally – and ultimately, what do you do with it & what have you learned from it?

Josh:  It’s easy to get jilted by adverse criticism. I would say some of the criticisms we’ve received in the past are ones we could ultimately get behind, so they don’t sting so bad. Truth is not everyone’s gonna like the stuff you write. I would submit that not everyone should if you are really putting yourself in the music. I’ve met very few people that deserve universal adoration. That being said, it always feel better if a critic finds good stuff to say about these songs you’re using to show those potentially ugly parts of yourself. Ultimately if you believe the good reviews, you have to believe the bad ones.

SBS:  In terms of the music you’ve put out there into the world, shows you see, shows you perform, bands you follow…all that goes with music really…how do you feel like you’ve personally contributed to the music-scene around you?

Josh:  The music scene where we are from is an interesting one. There are tons of bands offering up solid takes on many styles of music, which feels great and fertile, but there’re also pop trends and narratives of cool that come and go and get a lot of attention real quickly from the tastemakers, which makes it all feel a little less genuine. I suppose every scene is similar in that way. I’ve struggled some in the past with how we fit into the scene around us. I hope we make it a better place. 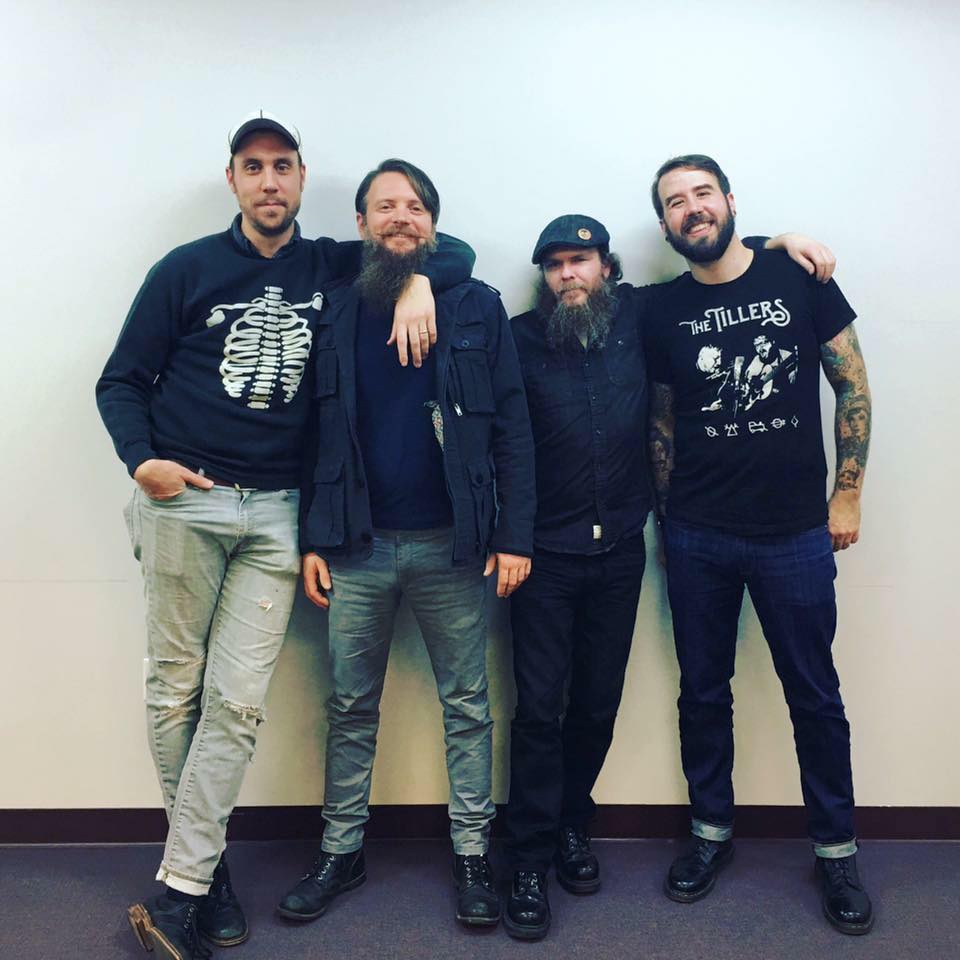 SBS:  What’s the band or artist you’ve listened to the most in 2017…mainstream or indie, I’ll leave that up to you?  Was it because of a particular record?  What’s got you listening to them so much this year?

Josh:  Each of us in the band has varying tastes in music. At some point when we’re out on the road, I’ll force everyone to listen to something by The Drones, who are in constant rotation for me personally. I’m not sure there’s been a record yet this year that has really turned me on so much to warrant a theme for 2017, really. The new Brand New record is pretty great. The record PUP put out last year crushes pretty hard and gets a lot spins in the truck. I’ve fanned an old flame for Tim Fite this year and started covering his song “Away From The Snakes” when I get the opportunity to play a solo set. Been listening to his catalog a lot, not sure what lead me to the rediscovery.

SBS:  Any special events or plans lined up for the rest of 2017 as far as the music is concerned?

Josh:  We’ve actually had a flood of new tunes popping pretty easily into existence, so we’ve decided to lay low on the shows front for the rest of 2017 and get back in the studio.

SBS:  If there is one message the entire world needs to hear right now, what would say that would be?

Josh:  Tolerance is not weakness.

Find out more about Yellow Paper Planes at their official website:  https://www.yellowpaperplanes.com