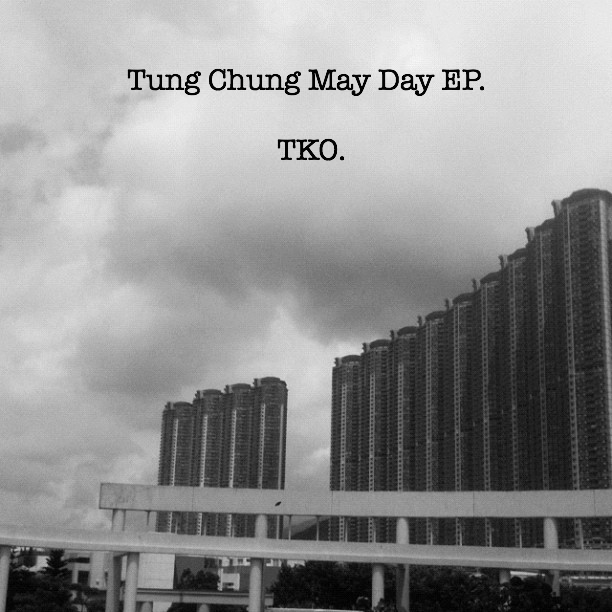 The music of TKO couldn’t have possibly come at me at a better time. Last night I watched the movie Frank for the very first time…I’ll just say for music-lovers out there, it’s a movie you HAVE to see. Largely dealing with the spirituality and freedom of creative-genius, it demonstrates a clear path to a type of happiness achieved only by truly letting yourself go. Some people would certainly argue that the music in the movie was borderline-insane I’m sure – but I’d be lying by omission if I didn’t mention the fact I turned directly to my wife Becky to say ‘you know I’d FULLY listen to this music if it was an album right?’

With a reassuring, tender roll of her eyes that somehow tells me she loves me…’of course,’ she says.

And the moment that I turned on the Tung Chung May Day EP from TKO, I immediately yelled out, ‘It’s Frank’s band!’ TKO – again…you couldn’t have come along at a more perfect time for these earholes of mine – I’m SO READY for you today! Let’s get WEIRD!

In what I can only describe as something akin to like, free-flowing jazz-meets-experimental-electronic music, TKO is nothing else if not unique first and foremost, something they make known to you quickly through the opening tune “Mr. Analogue.” Featuring Akiko A. – it starts out like a great intro to a mystery movie…you’re both captivated and interested right away…but you also don’t know exactly what in the all hell is going on yet, or what’s coming up only minutes later down the road. The subtle & mysterious intro shifts into a stomping low-end infused beat, keeping the uniqueness of the vocals roaming throughout the ever-growing, continuously expanding sounds. This is music made without regard for the mainstream…ideas unfiltered and as pure as they come; TKO might sound completely crazy to you, maybe even to most people…but like I said to my wife – ‘it’s not exactly sing-along style like Kings Of Leon or anything…but it IS completely different than ANYTHING you heard yesterday.

Like…LISTEN to “Dark Souls” and tell me you can just find this anywhere…you can’t! I mean, you can…it’s not like this isn’t out there right now – it IS, so go get some TKO in your face…but you know what I mean – this is away from the ‘norms’ of music by a million miles. MC Haranei comes in to light-up the mic with a perfect flow that is blown-out beautifully & purposefully in the mix; that’s the thing about albums with sparkling clarity in the production – you can tell easily at moments like this one, that the direction of the sound of the vocals specifically is completely on-purpose. MC Haranei delivers fully with a wicked verse that absolutely matches the unique energy in the music, taking the words all back to the time when hip-hop reflected true poetry as opposed to the modern-day lyrical ‘brand-building’ that we often get in the genre today. The recording itself on those vocals reminds me of “Bob George” by Prince, and musically these guys have me loving TKO as much as I do the crazy/genius sounds of Casiotone For The Painfully Alone, which is still easily one of my favourite artistic/avant-garde bands out there in my collection today. TKO, you’re keeping excellent company over here at SBS – this music fits right into my life I tell ya!

But I am STRANGE and altogether way too proud of that. Moments like the short & bizarre “Nowhere To Be Found” still have an incredibly viable place in my heart…I dig oddities like this short, less-than-a-minute long tune. In a sense, it’s due to this shortened-style and incredible versatility in their experimental electro that the music of TKO also reminds me very much of another band we’re met through sleepingbagstudios, The Other Colors. I know what you’re thinking…that’s a fairly niche comparison…that only the people that read regularly here at the homepage might catch onto and understand…and perhaps you’re right. But the reason I made the point, is that the similarities that actually exist in between the music of these two bands is actually pretty extraordinary…like, they’d almost certainly be best-friends or all be in a band together if they were in any kind of reasonable proximity to each other…

…but that’s just the thing…they’re not. The Other Colors come from France, and TKO comes from Hong Kong…those two places as you know are miles and miles from each other – so how COOL is it to get something so similar in its uniqueness from two entirely separate continents right? Obviously I get it…I know the internet exists everywhere and we all have access to any one of a billion potential influences, but I suppose what I’m saying here is that these two bands I’m referring to in The Other Colors and TKO are SO UNIQUE that you can tell for a fact they’re not consulting the latest trends or maybe even turning their computers ON. I would wager that both of these bands and sounds are born without the influence of anything else happening around them musically, so to hear them both come out at such a stunning, similar atmosphere, textures and tones…honestly I think that’s mind-blowing. I can whole-heartedly say without a doubt that these bands would completely be massive fans of each other’s work and fully recommend that The Other Colors check out TKO and vice-versa.

Stuttered-shots of electro & vocals float through the beat of “Robert Hope Jones,” which shifts, changes and pulses with all-kinds of ear-tempting elements in the mix. TKO makes this avant-garde style truly jump to life with the way they’ve found their sound in the studio-mix here on the Tung Chung May Day EP…they’ve done a fantastic job of making the music dynamic and allowing these different aspects of their music from piano/keyboard sounds to haunting atmospheres come through brighter at different points, coming and going & keeping it plenty interesting for us all to hear.

The added seriousness in the vibe of “Goodbye” is something you can hear…as far as electro-music goes, this definitely sounds like as much of a farewell as you could imply through the sound & the emotion. The electro-pulse on this one is almost a little more similar to a mainstream-ish mood or atmosphere you might find with the Boards Of Canada, or perhaps even in Massive Attack’s catalogue…so there you go; for those that are ‘in-the-know,’ you now know the seriousness-level of which I’m referring to. If you DON’T have this frame of reference…time to go & strap those headphones of yours on…you’ve got some homework to do… The weirdness of TKO never pulls-back, but the additional layer of melody towards the end of “Goodbye” was extremely effective, noticeable and quite a beautiful addition to this song’s ending.

In one last twist, TKO provides you with a bonus-track…a massively-extended re-cut of “Mr. Analog” in their ‘Lekker Hondje Border Line Darkness Remix.’ Consider yourselves warned: this song WILL try to kill ya…or at least induce a seizure…it’s about as extreme from sound-to-sound as it can get and a true audiophile’s delight. These sounds are freakin’ PHENOMENAL and some of my absolute favourites on the EP. I can remember back to my good ol’ acid-induced heyday and absolutely recall how much I would have appreciated a song like this in that altered state of mind. The depth of the extremities on this final bonus-cut are so HUGE that your speakers when turned up in full could easily blast you physically straight across the room. Filled with glitches and completely unexpected full-scale launches into massive dub-step/IDM sections – you’ll never see this song coming as it moves from moment to moment and some of these gigantic blasts will literally shake you as you sit in your chair. AWESOME right? It’s a nine-minute overhauled & completely rad ending to this highly experimental and stunning experience in sound. Big fan of creativity in music like this as you know, and TKO have certainly won me and my earholes over today!

Check them out further and support TKO at their Facebook page here: https://www.facebook.com/TKOHongKong