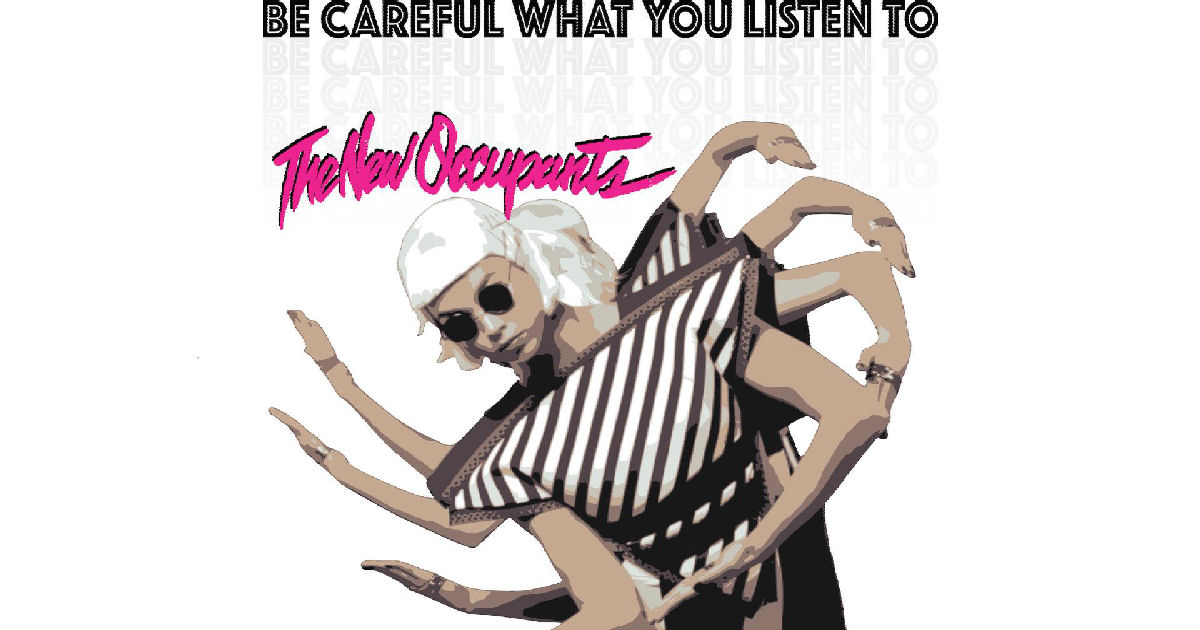 The New Occupants – “Be Careful What You Listen To” Featuring Mr. MooQ – Single Review

This is like the Blue Man Group met King Missile and then set forth to conquer the world.

And dammit – I sure as hell hope it does – a song like this SHOULD catch on…not just for the wildly robotic sounds or stunning spoken-word performance – but for the message itself.  “Be Careful What You Listen To” is a killer warning…of sorts; it’s definitely advising caution, but much more-so on behalf of a musical-advocacy that recognizes music’s awesome power to form addictions in our listening ears.

“And it doesn’t end there, oh no – music does this thing called imprinting…”

What makes this song so genius stares you straight in the face.  With the bombastic energy and extremely colorful sounds pulsing & bouncing around throughout this song, it’s like The New Occupants and Mr. MooQ are tell you directly to “Be Careful What You Listen To” while giving you the EXACT REASONS as to why that IS through your speakers with the results of the execution on this concept.  You following me people?  Seriously – this is extremely cool stuff and it goes the extra mile to make its point.  Through the brilliant spoken-word that narrates the highly detailed & humorous story that winds itself throughout the song, if you’re paying attention to what’s being said – The New Occupants and Mr. MooQ are DOING all of the things that they’re pretty much telling you to be careful about – what a twist!

Honestly though – what about this isn’t impressive?  This is like the coolest electro groove from a band like Hot Chip, combined with brilliant personality on the mic and spoken-word that easily rivals some of the greatest out there.  Between the mechanical nature of the electro-vibe & chant-like chorus, and switching between that & the spectacular spoken-word that’s occurring on “Be Careful What You Listen To” – the straight-up appealing & enticing sounds never stop coming.  The music is killer – not only is it highly dynamic as it shifts from the lefts & rights, but it’s also extremely versatile – LISTEN to how well they stop/start the energy to make room for the vocals & lyrics to make the impact they deserve!  The way the chorus keeps coming roaring back is enough to bring a new smile to your face every single time it happens, because coming right after the lyrics in the verses, the irony shines brighter & brighter.

I could have heeded the warning from the title…as perhaps, maybe you should!  I mean, all I’m doing is providing you with the advice they’re attempting to give you themselves…and they’re definitely doling out this advice for a reason.  For you see dear readers, dear friends, all is lost for me…I’ve already been consumed by this song and there’s absolutely NO going back for me now.  I swear I turned this song off days ago but it’s like it’s still playing in my head everywhere I go…and I seem to have NO problem with that whatsoever.  So I’m just saying – YOU still have the ability to make the choice that I can’t any longer; I’ve already listened and now I’ll be hearing this song in my head for years and years to come whenever it’s not existing on my playlist already.  Save yourselves!

Or better yet – don’t.  Join me.  “Be Careful What You Listen To” – but like, don’t this time?  I’m here to enable you & encourage you to listen to this brilliant collaborative effort, like the music-dealer standing on your corner with a trenchcoat loaded up with bootleg CDs.  The energy and untamed fun never quits on this cut from The New Occupants & Mr. MooQ – it’s sound advice they’re doling out – and incredibly accurate when it comes to everything about this aptly titled tune.  You’ve been warned (& encouraged)!

Find out more about The New Occupants at Facebook:  https://www.facebook.com/new.occupants

Find out more about Mr. MooQ at Facebook:  https://www.facebook.com/mrmooqmusic/

Tags: Be Careful What You Listen To Mr. MooQ Singles sleepingbagstudios The New Occupants