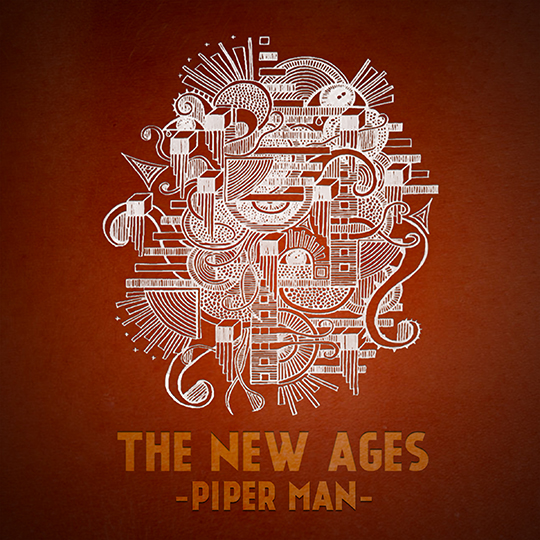 This should make for an interesting review!

This new EP from The New Ages is full of influences you can audibly hear. Part Rush, Red Hot Chili Peppers, Placebo and part UK altogether – this latest effort from the New Ages has a steady rock pulse pumping through the entire course of the EP. It has complex beats and rhythms that never let up – these songs are all alive; vibrant, full of life and well written.

Musically speaking – Piper Man is very, very well played. These are strong songs in composition – a perfect example of this is “Waterfall,” a cut near the end of the EP but one that is played with a ferocity and rare pop-intensity. It’s also the track where lead singer Ant finds his place solidly and takes a steady foothold within his own place in this band of very talented players.

One of the influences they list is The Red Hot Chili Peppers…which is appropriate in a couple of ways. When you listen to their track “Disguise” you’ll hear the capability Ludo has on the bass and decidedly agree that the Chili’s have a solid place in that sphere of influence surrounding The New Ages. Guitarist Dan riffs along this song just like Frusciante did in his most intense moments, filling in with the random alongside the driving bass-line. Guitar freedom at its best.

Unlike the Chili’s – the song “Disguise” is HUGE. A real highlight and compliment to drummer Ben – this track absolutely showcases his uncanny rhythmic and inventive drums played flawlessly. This certainly isn’t a slight on Chad Smith of RHCP – he’s incredible of course – but the Chili’s have never gone BIG in their sound production-wise. This track “Disguise” shows that The New Ages have another gear they can slide into and provides some real hope for the future of their music altogether.

Ok. Ok ok ok OK! I’ll address once glaringly obvious piece of this puzzle – the vocals. If you’ve paid attention so far – you’ll notice I’ve listed bands like Rush, Placebo and Red Hot Chili Peppers as sonic influences you can hear in their work…and ALL of those bands have ONE thing in common above all others: A “Love’em or Hate’em” singer. They might very well all be extremely talented – but they’re all polarizing. Even Rush fans can’t put their finger on exactly WHAT they like about Geddy Lee’s voice, they just do. The people that don’t like him find him nasally off-key for what their ears are expecting and that same can be said of Placebo. Anthony Kiedis is notorious for walking the fine line edge of on-key and off.

Lead singer Ant fits in with all of these singers and their attributes. Some of you will love what he brings to the music; others will be listening and expecting a different tonal quality than what comes out of Ant in combination with the music. Like Rush or Placebo, much of it comes across nearly as narration, rather than traditional singing. Regardless of which style in his repertoire he’s singing in – he inarguably brings with him an excellent vocal hook or two per track as well.

Coming back to “Waterfall” again makes me appreciate what a true BLEND this music is. This particular track is such a superb combination of the old-school and new. You can almost hear old-time bands like Mariliion or Gowan bonding with bands of today like Franz Ferdinand or The Killers. Seriously – that makes for music that gives you something interesting to the ear. I think this particular track grabs me as well as it has a haunting early R.E.M. feel to it as well, and of course you all know they remain my favorite band to this day. Even the title track “Piper Man” has that same cryptic feeling and dynamic soft vs. hard edge to the music that has made alternative a timeless genre as valid as the rest.

Composition-wise, there’s no argument – The New Ages can certainly write tight, multi-faceted songs that really take you on a rock adventure. And while the comparisons have led to polarizing singers that some respond to and some don’t – one thing can also be said for Rush, Placebo and The Red Hot Chili Peppers…they have ALL enjoyed massive success and careers with longevity.

I think that recipe for success should hold just as true for The New Ages and here’s why: It’s because I also think that if you were to go back to where all of those bands started and listened to those first albums all over again…well…I bet you’d come out of that listen and agree that this band The New Ages and their EP Piper Man shows every bit as much promise for the future as those now classic albums did when they were released for the first time.

Listen to the EP Piper Man by The New Ages at their Soundcloud page at: https://soundcloud.com/thenewages
And why not support them at Facebook as well! https://www.facebook.com/TheNewAgesBand