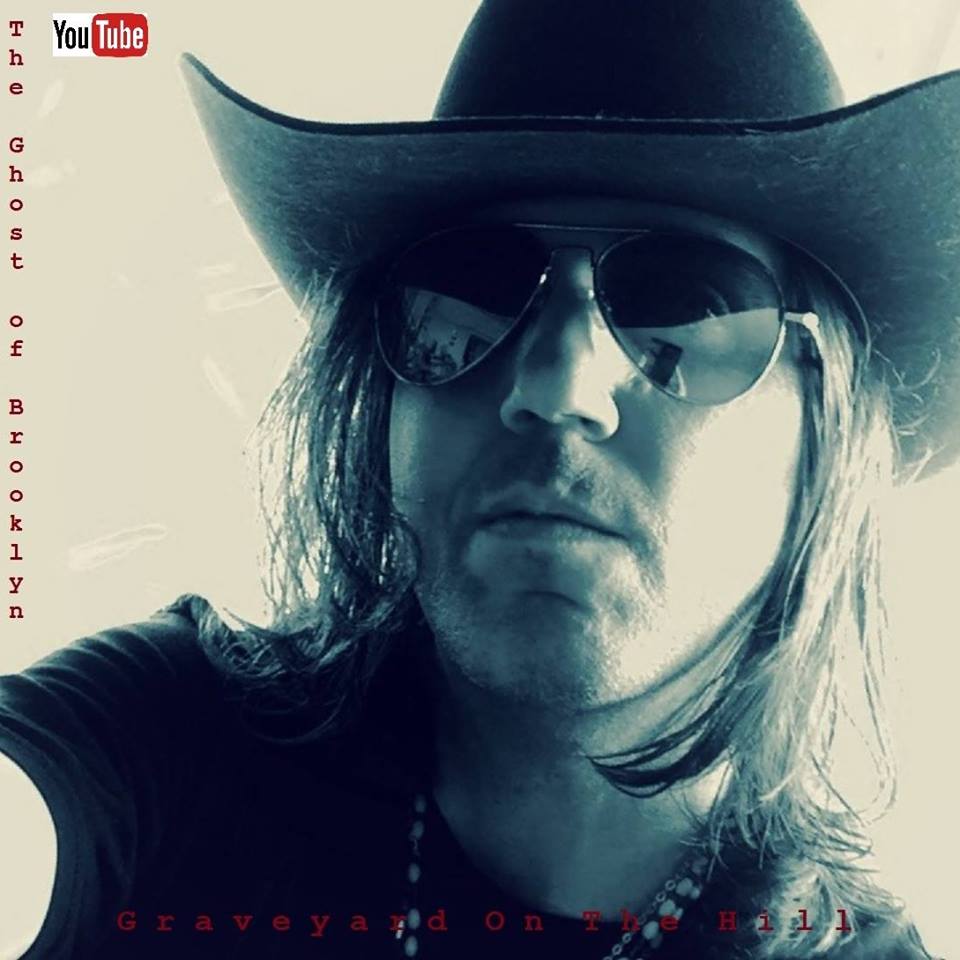 The Ghost Of Brooklyn – Graveyard On The Hill – Album Review

For a dead guy…it seems he’s able to still remain plenty active.  Don’t let the lack of life/functional-heartbeat fool you for a moment – when it comes time to make the music, The Ghost Of Brooklyn is alive & well.  He’s always had a signature style & approach to his music…without even pressing play on the new album Graveyard On The Hill, I’m already assuming he’ll be further evolving the sounds we know & love him for.  The Ghost records his stuff LIVE…which should always be mentioned…because even though the songs are often minimalist in the elements that create the melodies, it’s still impressive that you hear very few hiccups if any in a freewheeling performance.  Don’t balk at that comment – you know it’s true; even your favorite mainstream bands/artists still make mistakes night after night…near-perfection is really the best you can ask for.  In that sense…it’s always worthwhile to hear what The Ghost Of Brooklyn is able to cook up all on his own…his new album is no exception to that rule and this particular method of recording is truly one that seems to suit this artist & his melodies just fine.

Changes HAVE been made in my opinion…and to be truthful I think you can both hear and see them.  Everything from the music itself to the vocals seems to have additional clarity and presence that has The Ghost sounding more alive than he has in the past…and if you look at the picture that accompanies this record, you’ll notice there’s a man on the cover that’s no longer hidden in behind a caricature-drawing or cartoon picture of himself.  Could it be The Ghost is materializing right in front of our eyes & ears?  Whatever séance has taken place, whatever the spirits are feeding him or however it’s happened – I think those improvements you can hear on this album truly count for a lot.  I don’t want anyone to get me wrong though – I’ve always dug what The Ghost has brought to these speakers…there’s something so entirely natural and REAL about the music he writes.  To have some of the effects on his vocals dialed-back from what we’ve heard in the past has really helped these songs in extraordinary ways to bring out their melodies…just enough of a hint of the quirky signature-reverb to his sound to still be unmistakably Ghost, but smartly calmed down to allow the ‘real’ Ghost to start truly making himself known to us.

As lo-fi & low-key as it gets – I think he’s done a great job of easing us all into the new record with two memorable songs at the front, back-to-back with “The Afterlife” and “Vegan Hamburger Joint.”  Like’em both; like’em for entirely different reasons.  I dig the hypnotic groove he latches onto…the riffs are repetitive but they work and also allow The Ghost Of Brooklyn to introduce a more refined version of his vocals & overall sound.  Chill & easygoing – “The Afterlife” gently welcomes you into the realm of The Ghost in his Graveyard On The Hill.  By contrast, “Vegan Hamburger Joint” allows the wilder, more bizarre part of his personality to shine with added character in his performance.  Nearly slipping quietly into a surf-rock influenced sound…I have to be careful with just how much I like this song, because I honestly like it a lot.  That being said…if that IS the case and I do love it as much as I claim, I may as well buy tickets to an acoustic show from The B-52’s; that’s not something I’d ever see myself doing but The Ghost has me wondering how well that might have worked and certainly has me imagining it by comparison to the awesome hook in the off-kilter vocal rhythm and groove of the riff.

Really dig how he manages to layer the harmonies in there…or you know, outside of the verses when he’s just freestylin’ – he sounds great on songs like “Vegan Hamburger Joint” and “Graveyard On The Hill” when it comes to the backing layers.  I think “Vegan Hamburger Joint” might appeal to crazies like myself & The Ghost but might possibly be a harder sell on the mass-public…still think it has a great chance of making it through.  The backing layers, melody and idea of the album’s title-tune “Graveyard On The Hill” all sound great…but I have to admit to being entirely unsure of…most of the choices he’s made on the lead-vocals in this particular performance.  He’s done a great job of making you NEED the melody he’s created here though…so it becomes one of those tracks where you have to go through one element in order to get to the other you love so much…at the end of the day, I still felt it was worth it.  That being said, immediately after came “Celebrate” which for me, instantly connected and became an early favorite for me on the new album by The Ghost Of Brooklyn.  Beautifully sweet, innocent and isolated, “Celebrate” sounds like a perfect memory frozen in time…a moment you’ll never forget…a defining decision in your life…something monumental anyhow – and in the background, you hear “Celebrate” playing gently, bonding you, the song & the moment together forever in time.  I’d be absolutely lying by omission if I didn’t say I absolutely fall in love with indie-songs/sounds like you’ll find on “Celebrate” – that’s a real celebration of what that specific sound/genre is entirely all about.

“Build Your Own Rocket” had the toughest spot on the record coming after “Celebrate” – any song would have potentially suffered a bit coming after such a blissfully innocent & sweet song; just so happens that The Ghost Of Brooklyn might have caught wind of this too.  I don’t mind the music, I don’t mind the performance itself, I certainly love the use of samples into the mix of what we hear…but as far as the writing goes, this one really didn’t grab me.  At the beginning I felt like it bordered on a nursery-rhyme melody…as it progressed I felt like “Build Your Own Rocket” had launched itself and its ideas right out into space.  I’m not often one to straight-up recommend tossing a track…but there’s an argument to be made that would certainly highlight just how different this one tune is from the rest by comparison.

So maybe a misstep…maybe not, maybe you’ll love it.  In my opinion, The Ghost gets right back on track after “Build Your Own Rocket” with “Koh Samui” and heads back into a tiny, small and sweet sound to form the vocal melody and rhythm of another tune that works pretty strongly in his favor.  A few rougher-spots in the vocals/lyrics of this particular tune – but I’d trade those natural-imperfections for the sweeter sound we find overall on “Koh Samui” any day of the week.  The Ghost Of Brooklyn does odd-sincerity/indie-emotion well when he wants to…”Celebrate,” “Koh Samui” and “Hearts On Fire” are all great examples of the raw & real approach he has to his writing.  He doesn’t overcomplicate and he ends up doing a fantastic job of communicating what’s real in his music to us as listeners.  Songs like “Hearts On Fire” come out sounding that much stronger and emotionally-attached, that much more reflective, innocently-questioning and realistically-observational.  Also one of the tracks with The Ghost’s vocals at their most ‘real’ or ‘human’ or ‘alive’ if you will – he nailed it on “Hearts On Fire” for me with the earnest sound of his voice and the genuinely audible emotion you can hear in the music.

As a record recorded live, I think moments like “The Mosh Pit” become a bit more acceptable.  Not gonna lie…I was a bit indifferent on this one & didn’t really feel too much one way or the other.  It’s a LOT loose here…like a freestyle poem of sorts or streaming of consciousness…I suppose it was more of a connection between the theme/music/lyrics that pulled me out of this one.  “The Mosh Pit” is certainly arguably the most ‘rock’ that you’ll hear from The Ghost Of Brooklyn on this album…but this idea heads off the rails a bit by asking us to still grasp that connection between the lighter sound of the music overall & its lyrics.  I used to be a complete connoisseur of the pit back in my day…I’ve certainly thrown my share of elbows and crowd-surfed to the front as often as my youth would carry me…”The Mosh Pit” here really didn’t give me that vibe.  It’s a really tough one for me…I grew up on grunge…part of me wants to scream and shout and yell about how there couldn’t be anything less grunge than writing about “The Mosh Pit.”  It’s like Fight Club I suppose…you can certainly encourage them, you can start them yourselves…hell, you might even be able to write about it ambiguously…but I don’t know about just straight-up talkin’ bout it, know what I mean?  This cut might be breaking the rules of ‘what’s grunge’ and what I’ve been taught by my fellow Generation X’ers just a bit too much for me.

The Ghost really seems to rebound well however.  Once again following up a song I wasn’t too stoked on with another solid gem, “The Bridge” has some really beautiful guitar-work & melody running through it.  There are certain words I personally have a hard time with in songs like ‘groovy,’ ‘funky,’ ‘dance’ or anything to do with ‘doves’ or counting songs/band-anthems of any kind…not The Ghost’s fault, nor should anyone really listen to what would certainly be an irrational complaint that would come from me out of discovering one of those elements or more on any given song.  “The Bridge” maintained my interest through the drifting tones of the guitars and their gentle, fragile & beautiful melodies – LOVED the backing vocals on this cut and the whole dreamy melody that it created.  More than any other – “The Bridge” really has a defined idea for its ending…which admittedly took me by complete surprise the first time I heard it…which was exactly the intention.  You’ve been warned.  Brilliant idea and perfect execution on the ending for “The Bridge” – it honestly brought a real smile to my face – great idea!

Graveyard On The Hill ends with a final ninety-seconds of sweetness with a cover of Daniel Johnston’s “True Love Will Find You In The End” – another successful, gemlike dose of innocence to finish the new record on the sounds that I feel like The Ghost Of Brooklyn does best.  I don’t mind the wilder-stuff…I already made my case for loving “Vegan Hamburger Joint” didn’t I?  But to me…it’s undeniable that The Ghost really does isolated, sweet, innocent and simple melodies really, really well and that the slower tunes came out sounding truly impressive on this record in their ideas, sound and performance.

I have no doubt that The Ghost will always keep us guessing as to what comes next & still be able to mix in his identifiable style/sound as he continues to evolve.  This record sounded a lot more ‘real’ to me overall…perhaps the other side really isn’t as far away as we think – or maybe The Ghost really is attempting to establish a memorable presence among the living here on earth.  Whatever he’s doing – I think this record shows growth and assures us he’s on the right path; this record is fun, raw, real and oddly sincere in ways that really entertain and endear us to the sound of The Ghost Of Brooklyn.

Find out more at his official pages below!

Tags: Album Graveyard On The Hill sleepingbagstudios The Ghost Of Brooklyn