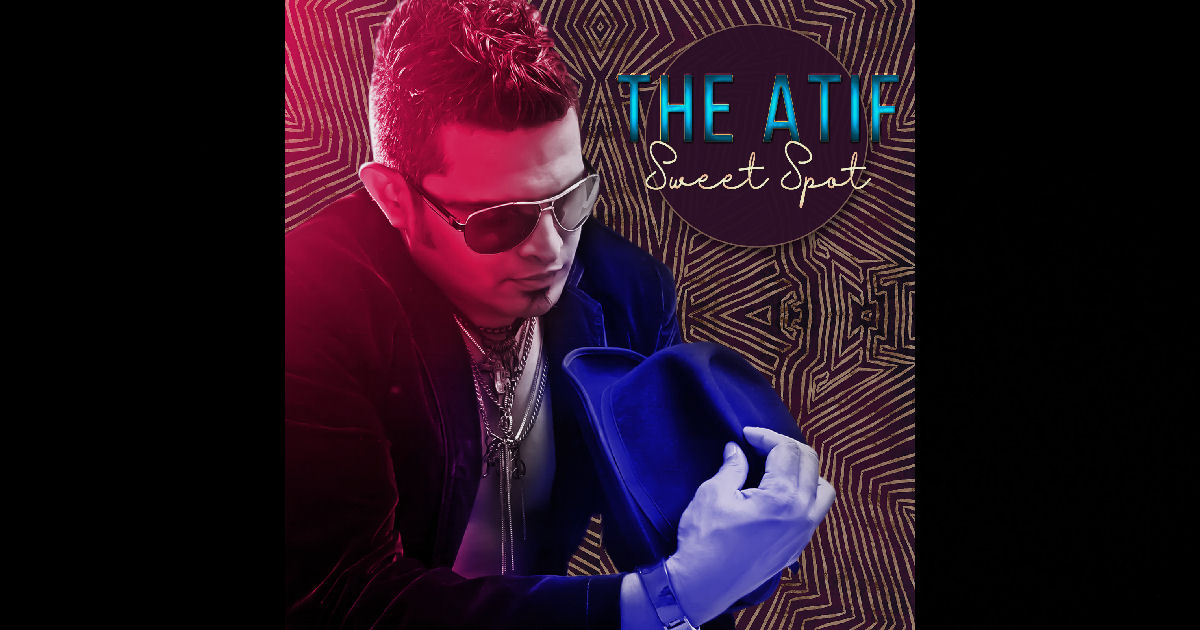 Been quite a while since we checked out The Atif!  It was back in 2015 when we reviewed a handful of singles from the man – and he’s back with a solid crossover cut that’s got genuine flash & dazzle in the sparkling hooks that run through his new song “Sweet Spot.”  Straddling the sounds that exist right on the edge between Pop & Rock, the sensually-driven experience The Atif has created on his latest single has a massive range of appeal that’s sure to entice a ton of people out there to have a listen.

The crunchy guitar chords and electric spirit fueling the energy in the music begins immediately, a lady’s voice soon follows to guide you into the “Sweet Spot” and get your blood pumpin’ to your special bits – the sexual attitude & tone of this song makes itself known instantly.  Tightly played, the rhythm section is on-point…both the bass & drums contribute solidly in their secondary roles – at the end of the day, “Sweet Spot” is about the vocals and guitar – those are the elements you hear directly in the spotlight pretty much at all times.  Excellent ideas from both and a great chemistry when combined, the guitars often have just as much personality as The Atif does on the mic and provide a real sonic depth that sizzles and scorches with hot moments from the axe flaring up throughout this brand-new single.  The Atif takes on a somewhat familiar flow for the vocals, which feels like a natural fit into the wildness of this music and a good use of contrast at the same time; he approaches the mic and brings a smoothness & control to the intensity surrounding him, adding in just enough rasp or energy when required to suit the song.  It’s a serious hybrid when it comes right down to it…personally I could hear why fans of say like, both Maroon 5 and Stone Temple Pilots would be able to dig what’s happening here, feel me?  That’s what I’m talking about when I’m saying widespread appeal dear readers, dear friends – ultimately I’m sure you all understand just how far apart those two comparisons are in their sound – but I’d be willing to bet you get why I’ve written that into this review once you hear the song.  That flashy sound is common to both bands for sure…the verse probably a bit more Maroon 5, the chorus heading towards that STP-like alterna-pop edge they flirted with throughout the years…and of course, the ever-present sexual energy & themes that both bands also share…”Sweet Spot” has all this going on & the potential to grab all those fans out there to both sides of this musical-measurement, and everyone in between.

Important to note, The Atif is also making moves with his music in behind the scenes that matter just as much…giving “Sweet Spot” exciting opportunities and the advantage of new avenues of exposure.  It’s produced by an expert hand in LA, no doubt about that – The Atif has got Joshua J D Walker working his magic on “Sweet Spot” – no doubt similar magic that he’s brought to the music of megastars Cher, Adam Lambert, Enrique Iglesias, Kylie Minogue, and many more throughout his outstanding career.  Now of course, working with a high profile name like Walker is going to help attract a bit more attention through name recognition and the quality that’s known to come with it – but The Atif didn’t stop there, he continued to push “Sweet Spot” out there into the world, eventually landing a spot on the official original soundtrack for The Disowned, which will of course further the journey of this single even more.  So not only did The Atif come up with a highly focused tune and fusion-esque single that sounds great to listen to from performance to production – but he’s clearly gone about things in all the right ways in behind the scenes & put himself in the position to give his new song a genuine chance at catching on.  He’s even got a lyric video out there supporting “Sweet Spot” as well – highlighting the imagery in the words through sexually suggestive scenes onscreen and combining another dimension to the single by visually displaying what the song’s all about from the words themselves to what we see behind them.  If you take it all in – there’s no mistaking what “Sweet Spot” is all about; The Atif ain’t making any attempts to hide his sexual chemistry on this single, he’s expressively embracing it and celebrating the empowered confidence that comes along with it.

Find the new single “Sweet Spot” by The Atif at Spotify here: