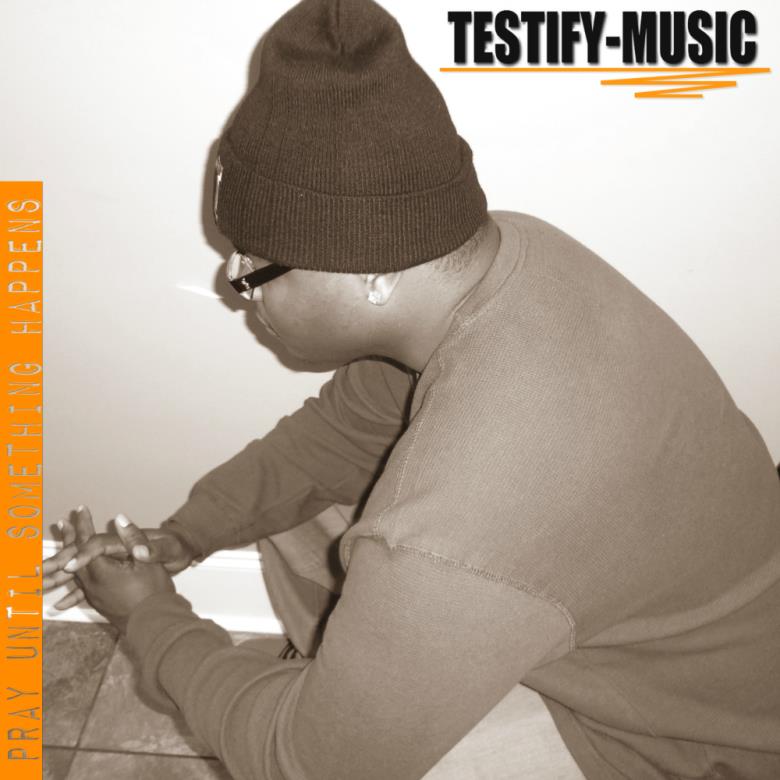 Interesting! Every so often through music reviews and interviews, I find myself in the midst of a religious conversation or, in this case, listening to a full album based in faith and religious-context…which is always interesting for a person like myself, who identifies with no singular ideology or religion of any kind. That being said…many of you following readers also know that this is one of my favorite conversations or subjects to listen to & learn about…and that I’m willing to listen to anything and everything that comes my way. So push play on Testify-Music and join me in listening while we take you into one of the most unique experiences of audio-faith you’ll ever come across. Preach!

The album opens powerfully with “P.U.S.H.”…beautiful piano comes in with a gorgeous line…and soon, passionate spoken word echoes forth from the guy once known as Mik3y-Savag3, now fully embracing a different path of service and devotion as the man he has always been capable of being; himself – Michael Anthony Warren, recording under the moniker of Testify-Music. As a gigantic fan of spoken word…in a strange twist to it all, this opening was like opening the front door to my own home and having a seat in my comfortable surroundings; or, in other words – this was right up my musical alley.

What I REALLY wasn’t expecting…was just how much I honestly ended up digging this album from start to finish. Truly. I mean – I’m just being honest! I have a very thick, nearly impenetrable skull…it nearly repels knowledge, I swear! But here I am, sitting here in the studio…helplessly feeling the VIBE here! The tracks to follow the opener, “To Save A Life,” “Attitude Adjustment” and “#thePower” all had truly impressive flow, well chosen-samples and a completely tight mix.

Michael Anthony Warren has done something incredibly well here…there truly is a fine-art put into the way this all comes together. Honestly – I have the ability to listen to this objectively…and in doing so I can listen to these words as information itself…and when you listen to it in that sense, you’ll hear songs truly packed with knowledge and perhaps more importantly – the passion in the delivery that will have EVERY ear listening intently, not necessarily just those of a religious faith.

Seriously! In Testify-Music, Michael Anthony Warren is demonstrating a clearly in-depth skill set both on the microphone and ESPECIALLY through the lyrics. “Make You Proud,” is a perfect, shining example, as is “Self-Defeat;” a track about really owning your actions in a track that will more than convince you these aren’t simply random words in Testify-Music – they mean something. It’s also an example of how I feel I can still relate, even from outside of a religious context; everything I’ve built here at sleepingbagstudios has been the complete result of being consistent between those words of mine and the actions to follow. I 100% believe that you really need to be the same on the inside as you are on the outside…though that can often be tough for people, the result is always undeniably positive…and freeing.

Who is ANNA? She pops up on a track later towards the end of the album on a true highlight of a song, called “So Far Gone,” along with fellow guest-star Roscoe Moorhead. Both of these two bring something to the musical table, big time. Anna has literally one of the most beautiful tones and sounds I’ve heard in a female vocalist for a long while now. Just gorgeous. Roscoe Moorhead is certainly no-joke either, laying a quick & lyrically sharp rap on this excellent collaborative effort.

Through the final tracks of “Morning Prayer,” and “Now Or Later” – what resonates so clearly all the way through this album is the absolute conviction and belief in delivering the lyrics. Whether it’s from the perspective of a guest-star, or from the mouth of Michael Anthony Warren himself – every word put into the microphone is a word you know they believe in through and through. That kind of passion is a powerful thing – and if you were to ask me, that authentic delivery is exactly what leads to an album like Pray Until Something Happens, which becomes highly translatable and universal to all.

Keep an open mind – you’ll find these tracks to be extremely listenable. There is something for everyone here. Testify!

Find Pray Until Something Happens by Testify-Music right here: https://itunes.apple.com/us/album/pray-until-something-happens/id894137958