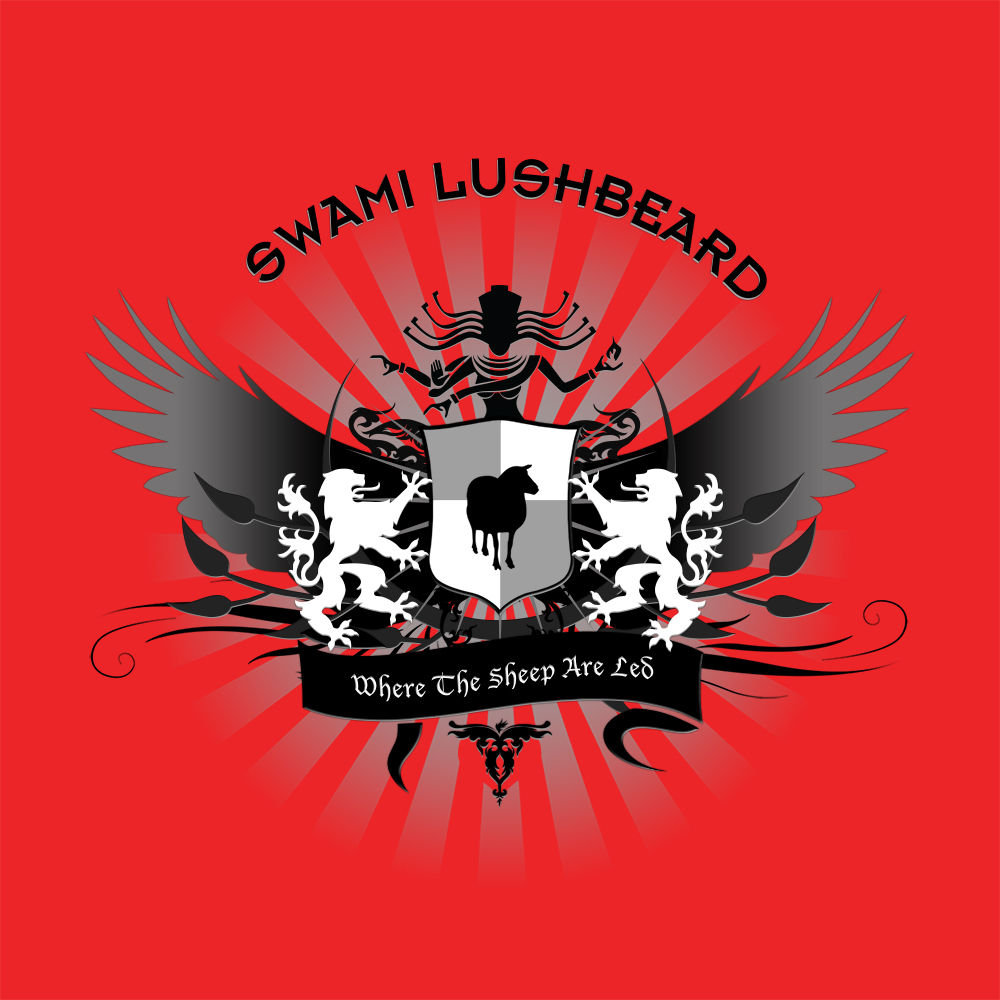 Swami Lushbeard – “Where The Sheep Are Led” – Single Review

Alright…the episode is long over but the rock continues! Swami Lushbeard is back in another appearance here with sleepingbagstudios in print after not just surviving our extremely lengthy video-interview, but thriving through it! If you haven’t caught the episode yet, be sure to check it out! In fact, Part II of their episode will give you a chance to listen to the very song in question today, the latest single from Swami Lushbeard – “Where The Sheep Are Led.”

Now…as much as I like reviewing music, reviewing a single can often be a difficult thing. Again many people are satisfied with a simple sentence and a thumbs-up from an opinion they value, and many independent journalists find themselves asleep at night feeling they’ve done more than enough through a byline blog mention…not us! What was particularly cool about reviewing this new single is that so many people I personally knew came by during the making of the last video interview with Swami, that I’m BARELY able to retain my objectivity here.

Because I’m already FULLY aware of the public reaction to this new song from Swami Lushbeard; they LOVE it.

No joke – when I was creating backgrounds and piecing together a simple video to go with their single to put on our show, I was visited by people from all over at the studio who would watch along with me. I got comments like: “That’s one hell of a band,” “That’s an awesome song,” and “Holy SHIT those guys can PLAY,” from other sources to help confirm the facts I knew so well already. Swami Lushbeard IS an excellent band – I was dead positive after hearing and reviewing their last EP, A Burning Desire, but still, it’s nice to get that confirmation from the outside…now I know I’m not crazy!

“Where The Sheep Are Led” is rock-riff heaven. Beginning in a daring fashion, a-cappela, the track amps up quickly into a chunky riff to build the verse. Lead singer Don Sprouls delivers a vocal-flow perfectly timed and sung with intensity to match the music…he even finds himself in the middle of a deadly guitar solo towards the end of this track. I wanna say personally, after meeting this crew through video and even having been privy to some underground Swami Lushbeard recordings…I KNOW this guy to be tough on himself when it comes to the vocals. And after a thorough listen, fellow readers, I’m sure you’ll come to the very same conclusion I have about all that….

As he has always done in the past – Don fits perfectly atop the music of Swami Lushbeard with a solid and confident tone, supported in this song through the slick & skillful bass of Dre, a sheer beat-a-thon being supplied from drummer Ian and of course melodies from M@ on the keys that are at the core of the song itself. Each of these pieces work together just as well off-camera as they do on it as far as I can personally tell! “Where The Sheep Are Led” is a complex beast; while it might have some standard riffs that allow Don to sing and do what he does best on stage, the rest of the band is going full-out here at all times around those meaty hooks from his guitar. It’s that very push/pull aspect between the rhythm and leads really give this song the vibrant qualities you need to have to warrant a single release.

And wait….didn’t I just mention something about the stage?

If you are in the LOS ANGELES area and you’re NOT going to TRiP on April 19th, 2014 to go and ROCK with SWAMI LUSHBEARD…well…well…well then you should find yourselves in a WORLD OF PAIN instead! Hmmm. I kinda like it…maybe it came off a little too harsh… Yeah…actually….let me try that again….

On April 19th, 2014 Swami Lushbeard will be playing a show at TRiP in Santa Monica, CA….and get this – FREE PARKING!!! How awesome is that? And painless!

Oh wait…it gets even better….like, way better! FREE ADMISSION = FREE ROCK N’ ROLL. At that rate, it might very well work out for me in the positive financially if I was to walk OR bus there from here in BC, Canada…so if you’re within 2-3 states of this show….well I’m just saying I’ve got my shoes on….what could possibly be your excuse? Get to that show!

But before you go – get yourself a copy of the latest single “Where The Sheep Are Led,” by Swami Lushbeard off their official homepage so you can sing along at their upcoming show! You can download it for FREE right off the page! Find that and all kinds of Lushbearded adventures here: http://swamilushbeard.com/

Tags: Singles sleepingbagstudios Swami Lushbeard Where The Sheep Are Led