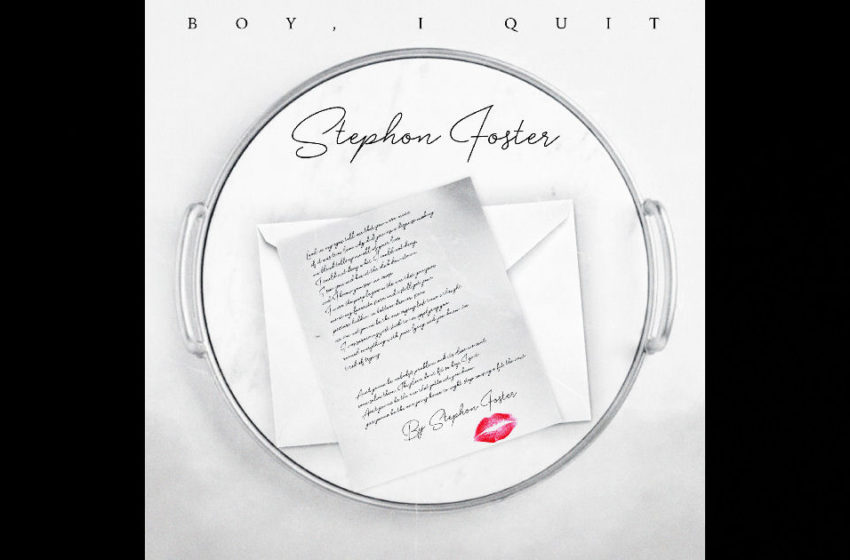 If you’ve ever found yourself going down the wrong path with your music, art, or career, then chances are you’ll be able to relate to where artist Stephon Foster has been at over these past couple years.  Still plenty young, she’s been not only searching for her own voice & true place in music where she belongs, but she’s also taken the advice of others along the way too – some of it good, some of it straight-up bad.  I’ve always felt from day one of interacting with & listening to Stephon’s music that her desire reigned supreme…that she’d eventually find her way to where she wanted to go with her singing & songwriting.  Even if the process seemed like it was taking longer than I’m sure she wanted it to, I had faith that the strength of her desire to make music would carry her towards getting that next album out there.

And it will…eventually.  But it didn’t at the time…desire carried her in a different way altogether.  In fact, Stephon had to scrap the entire project and start all over.  Make no mistake about the power of her passion for music though.  If you’ve ever lost an album or had to leave your songs behind, you know how painful & demotivating that experience can be…it can be so completely devastating that some artists never end up even finding their way back to the studio ever again.  Not Stephon though…she’s different…she’s relentless in her pursuit of a music career and making a name for herself out there.  It’s that desire…that genuine WANT to be an entertainer…that’s what got her going again and so far along into the recovery process.  Can’t slow her down at all really – she’s already nearly finished the next album after having to restart the entire process…that’s more than impressive – that’s commendable.  And as you’d expect after such a hard decision being made to leave a full record behind, she’s also noticeably switched up her direction & sound on her new single as well.  If you’ve moved on for the right reasons, then of course you know you’ve made the right call – Stephon should be proud of the fact that she had the courage to walk away when it came time to defend her art, career, and music.  If things aren’t coming out how you always envisioned they could be, I’d fully recommend you do the same as she has if you’re ever in that situation…life’s too short to compromise when it comes to your music.  As painful as it may seem at the time, if starting over puts you in a better position to be proud of the songs & material you’re putting out into the world, then again, you’re definitely making the right call overall.

That’s not to say there might not be a few growing pains as an artist shifts styles or goes through the motions of their own life in behind the music…it’s not always a case of switch it up and BAM, insta-career.  No…there’s still more to it than that…but chances are, you’ll pick up much more speed when you’re invested, interested, and in-charge of the direction & creative control of your career; could be a few quirky moments along the way as it all sorts out, but it’s the kind of move that will yield success one day soon enough.  Why everyone feels like things have to happen overnight anyhow is beyond me.  Make some moves, take some risks…test the limitations of your talents and of your abilities…be creative, have fun – it’s all about loving the every part of the journey 100% just as much as the results.

So here we are, the first single from her upcoming comeback record, a track called “Boy, I Quit.”  She’s chosen wisely in terms of what to release, she’s choosing specifically to take a more delicate route on this first release, easing us in to the vibes of her next record with a sweetened taste of what’s coming up.  There are things that work really well in her favor…elements like the guitar tones hanging suspended beautifully & sparkling in the atmosphere, the ideas of the vocal flow itself are solid, the chorus has strong hooks, and pretty much everything happening within the layers of the backing vocals is absolutely stellar.  I’m assuming that’s Stephon back there as well…and you’ll hear she’s got some really highlight spots where she’s set herself free to have those bigger moments in the background behind what she’s got goin’ on in the lead.  Up front, she’s doing well and holding her own…the writing is challenging in the sense that she’s got this fully loaded with lyrics and you can hear the effort it takes to keep up with them, especially in those first verses.  It’s meant to be sung, but at the rate she’s gotta get all those words out, she’s nearly rappin’ – you feel me?  So that’s a factor to consider for the future…that’s that ‘less is more’ approach…which might be something to think about; when you hear how she gets more space to express her vocals and really sing – you can hear what makes her special.  At the end of the day, I felt like she managed to keep up to the ambitious amount of words early on in the song…but just barely…all I’m advocating for is for her to take a look at that.  I have no doubt whatsoever that it was likely tough to get down & finalized in the studio…it’s a very challenging part to sing.

Which leads me to the other part of ‘why’ it was a challenging song to sing…why you can hear that slight hesitation occasionally in Stephon’s lead at times when it comes to being 100% on-beat…which is the drums.  I’ll admit…they’ve got me scratching my head in wonder a lil’ bit here…I’m just not at all sure about what this beat is attempting to accomplish.  There are moments where it lines up perfectly with the vocals and guitars, other times where the drums end up completely overcomplicating what should be a smooth & delicate sound…and honestly, the awkwardness of the extra beats added in, in my opinion, are taking away from what could become a very soul-soothing & chilled-out experience otherwise.  I look at it from the angle of what serves the song…and the drums are playing the role of the villain here for sure…you can hear they occasionally cause slight confusion for the vocals in addition to having them pop up in what seems like verifiably random moments along the way when they’re at their most excited.  A simple 4/4 and a hi-hat or some gentle cymbals ringing out is really all this tune needed; drums are the heartbeat of a song…ain’t nothing wrong with pursuing something unique, but when a particular sound invades the rest of the overall experience, that’s when you gotta pull back a bit.  Stephon’s personality, sweetness, and charm will likely be enough to keep you onboard throughout “Boy, I Quit” – but there’s definitely a bit of weirdness to the music she’ll want to examine in the future.  What I like most is that she does sound more at home and audibly happier here, even in the thick of this often heartbreaking tale she’s singing on “Boy, I Quit” – you can hear she’s shifted towards a sound & direction that suits her much more naturally.  It takes a bit of effort to separate vocal-layers as a regular everyday music-listener, I get that – but if you can, sit there and concentrate, and listen to how she’s using about…sounds like about three layers if I’m not mistaken at the maximum on “Boy, I Quit” – you’ll hear she’s got great tone and control on display in each of’em…there’s a ton of personality & character in the different approaches to how she sings each layer.  She has great low tones, and some of the highest notes in her register come out sounding the best without question, melody & idea-wise, she’s on solid ground with her new single…lots of positives to work with as Stefon surges into 2019 and refines her style & sound, confidently pursuing the passion she loves most – making music for you to enjoy.

Find more music by Stephon Foster at her official YouTube channel at:  https://www.youtube.com/channel/UCTmoIsZM8HiHrR4C6gvVU-w