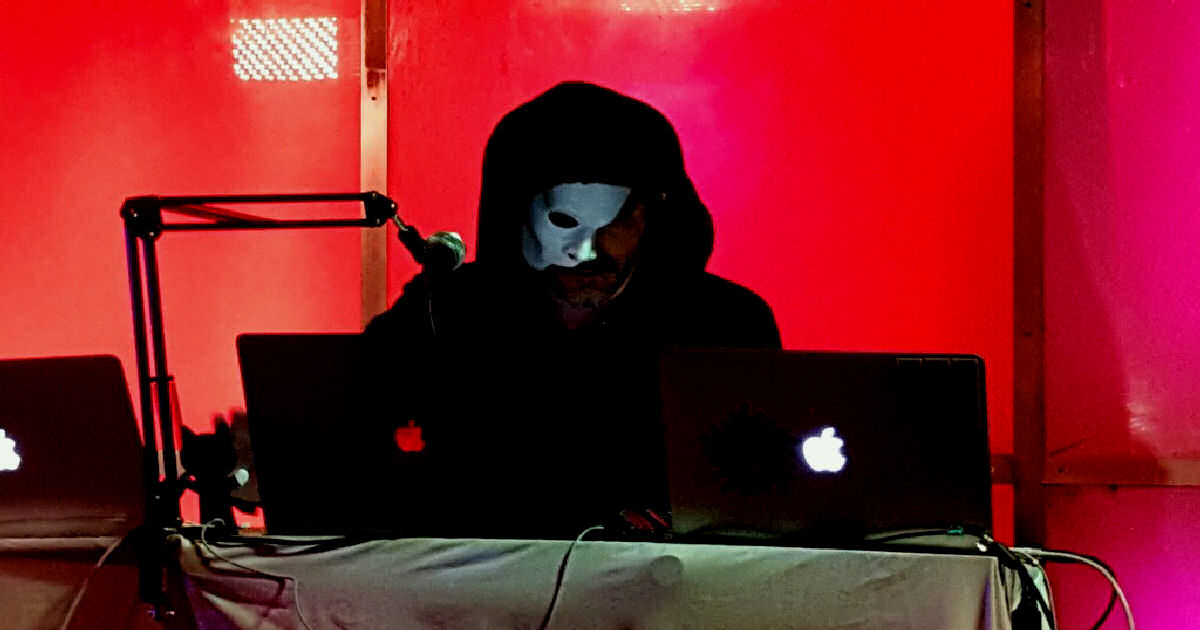 Always excellent to check out what Nullsaurus is up to – I feel like it’s a project that’s inclined to always keep us guessing as to what might come next.  Been about a year or so since we listened to & reviewed the Nullsaurus self-titled EP – and today we’ve got three new singles to give us a sense & an idea of where the story has continued to evolve from there.

“Frozen” has a real humble sound to it…very isolated and intimate, up-close and genuine in its thought-process…I think a lot of people out there would completely relate to the sentiment in this narrative from Nullsaurus.  Smartly threading the idea of protecting yourself by putting up walls in your mind for self-preservation – but then realizing just how much that same layer of protection hinders the potential for escape later on down the road.  Musically, it’s all very understated…the string sounds & gentle beat glide smoothly alongside the vocals – but ultimately, I’d argue that this entire song is the vehicle for one really impressive set of lyrics.  “Frozen” is oddly paradoxical in a way – like it’s all about being ‘stuck’ in so many ways – yet the song itself expresses that feeling & thought-process so freely & accurately.  On a pure songwriting level, Nullsaurus is clearly not “Frozen” whatsoever – there’s a real atmosphere in this song that hangs beautifully in the air with its ever-present hint of self-reflection, melancholy, and internal examination…I think the hooks are strong and not flashy, that it’s sung really well, that the music completely fits the vibe, and that the lyrics stand-out more brilliantly than perhaps anything else.  Wonderfully poetic & real – “Frozen” will likely make you take a hard look at your own methods for your survival as you discover just how much you might relate to this song & have experienced something similar in your own lives along the way.  Aside from “Frozen” being a slow/mid-tempo song, which is almost always a tougher sell to the masses out there…to me, it felt like Nullsaurus tapped into a real vein of personal experience here that will likely break through that obstacle and satisfy many an ear.

Overall, “Frozen” is decidedly different from what we know from Nullsaurus, but definitely within the realm & scope of what fans will readily accept for a change in direction.  On “Constant Craving <Holotropic Mix>,” I felt like we got back towards what we would have recognized as a Nullsaurus tune from what we’ve listened to before.  I think what goes so right for the “Constant Craving <Holotropic Mix>” is that, through the performance, Nullsaurus ends up giving these words from K.D. Lang a much more twisted & desperate feeling.  I’ll fully admit to not even being a remote fan of the original tune – but I’ll also definitely admit to liking this version by Nullsaurus and be willing to testify to the fact that, Lang had to have written a killer tune at the end of the day for it to be able to cross genres like this.  So there you go…we don’t need to love a song to respect what it can do – and Lang’s original hit turns out to live a vibrantly different second-life in the “Constant Craving <Holotropic Mix>.”  Would the purists like it?  You know…like dedicated fans of K.D. Lang’s music?  Heck no, probably not.  But for the rest of us – I think you gotta consider just how much of a different attitude Nullsaurus has given this entire song and how well it’s all come out in this new skin.  I get that it’s another low-key and somewhat mid-tempo tune – but I felt like there are real hypnotic, captivating, haunting, and rhythmic qualities that really keep us listening intently to this slow-burning audio-experience.  Not to end totally at the beginning, but…well…hey, that’s what happens when you’re repeating a song and writing a review at the same time sometimes, so too bad – LISTEN to the way this track starts!  That’s seriously brilliant and massively enticing to check out…reminds me a lot of Prick on “Constant Craving <Holotropic Mix>” – and that’s always a good thing in my books.  It’s electro…but there’s still an intense raw-energy that runs right through its veins that has a dark rock-edge to it…the use of the vocal samples is off-the-charts cool.

Hard not to appreciate the sweetness of “February,” which was written for the wife of this project’s main dude – and who would I be to bag on someone else’s romantic gesture?  Put it to you this way – it came out really well for Nullsaurus…I’m a cold-hearted musical-mercenary…if there was anything alarming here to point out, I’d still be the guy that did that.  Facts are facts, “February” is a decent tune.  Decidedly rock-based, switching directions once again, the electro-aspect of Nullsaurus takes on a secondary role here…once again, it’s definitely the lyrics that are meant to come across most in this tune.  Rightly so!  You go through all this effort to make a song for your wife, you want her to hear it!  It’s got sweet intentions, lyrics that are no doubt more relevant to its subject, but still relatable and adaptable to have potential meaning in your own life – or you might just dig the melody on this one.  It’s about as close to up-tempo as we get from Nullsaurus this time around…and if anything, it’s that mid-tempo speed and low-key vibe of the vocals that might take the people some convincing in these three tunes.  That being said, “February” has Nullsaurus sounding much more on the bright-side of things than the other two by comparison, which might give this project and these singles a wider-degree of accessibility to the listeners out there through the diversity they’ll find in their versatile ideas & styles.

If anything…the only thing I can perhaps say from my own personal experience is that…well…including a solo of any kind would be lost on my own beautiful wife, that’s for sure – hopefully that’s not the case here!  I’m sure the fine Mrs. Nullsaurus likely loves the melody and sentiment that move through the music, vocals, and hooks in the writing here.  There’s an excellent chance that being close to the proximity of Nullsaurus and the endless well of creativity and imagination that reside within this project that she’s gotta even dig the solos and instrumentation too – I’d be willing to bet she’s THAT cool.

MAYBE a tougher sell to the masses with the mid-tempo vibes here…but I don’t think these songs are necessarily written or presented with that in mind…these are personal tunes for personal times – and I think that even though they’re often internal reflections voiced aloud – they’ll connect with you too.

Find out more about Nullsaurus from the official Facebook page:  https://www.facebook.com/nullsaurus/