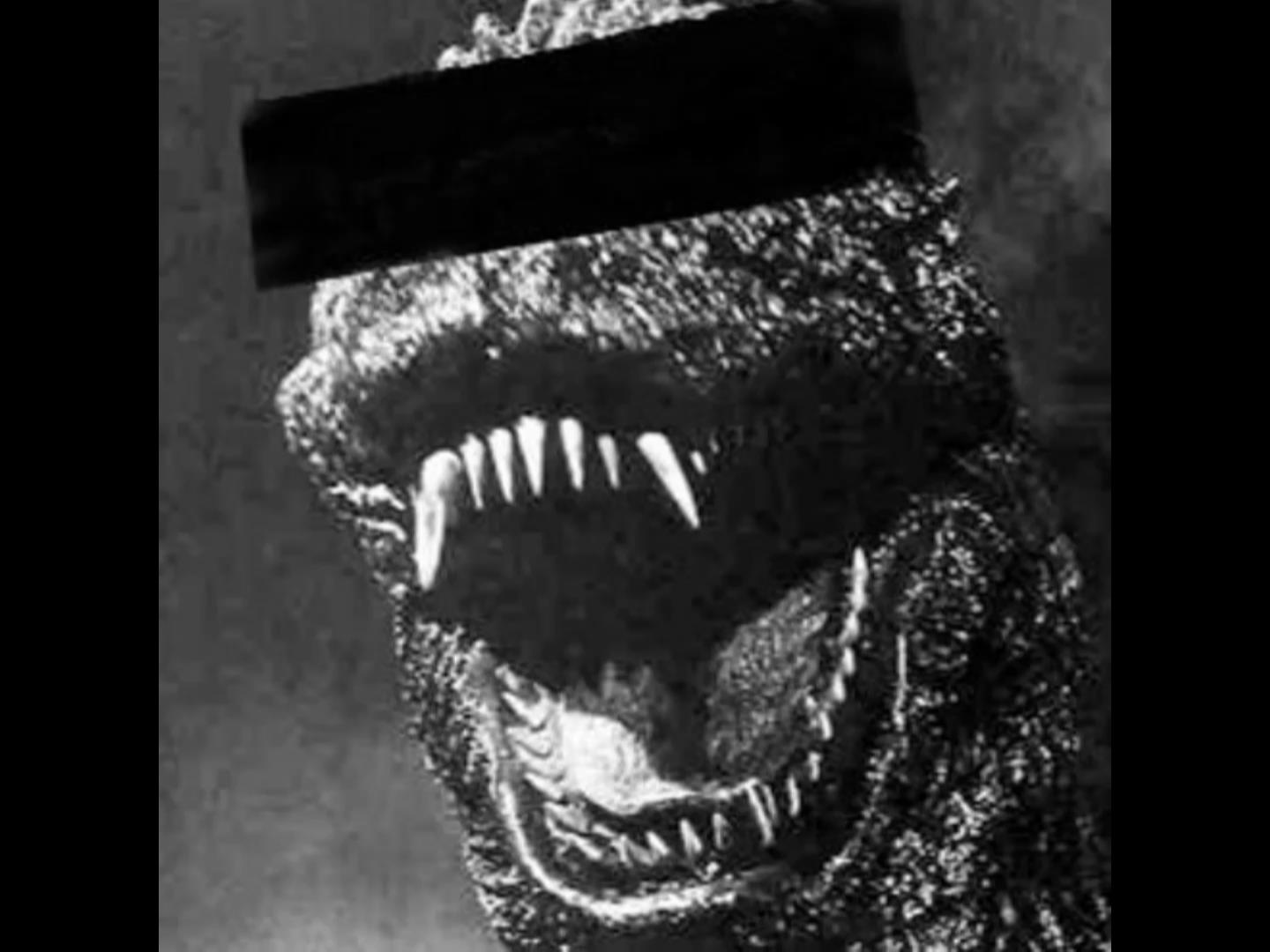 Here we go!  Some of that good old-fashioned electro-industrial music flowing out of these speakers right now through the innovative twists & turns on display throughout the new ideas he’s putting together over the course of songs from the upcoming official EP release.  Keeping in mind that things are bound to change in between now and the final studio-versions…let’s see what I can hear in these tunes before Nullsaurus heads into a crowd-funding campaign to start recording the finalized versions.

This version of the EP…a sampler or whatever you’d like to call it…starts out with a BRILLIANT dark-electro vibe and atmosphere that deals smartly in smooth, hypnotic-repetition on “RhetoricalAnswers [rh3thOr1k Mix].”  Entirely ignoring what a pain in the ass that title actually is to write-out in a review – this is an absolutely wicked tune to start the experience with Nullsaurus and immediately makes an impact with the unique textures and qualities of the electro-rhythm that carries the bulk of the music.  I know I’m not exactly normal to begin with…but I could honestly listen to this cut all damn day.  Definitely borrows on the Depeche Mode style & approach…maybe a bit of Orgy thrown in there…you get the idea; it’s dark but it’s plenty lively with electro, synth-rhythm & groove.  “RhetoricalAnswers [rh3thOr1k Mix]” if anything, was unbearably SHORT – absolutely entertaining at every moment.

As far as cover-tunes are concerned…there are a few you hear more than others due to them being, well, amazing songs generally…usually with memorable hooks that are time-tested & true.  One such song is definitely “Shout,” originally by Tears For Fears.  Now…you gotta understand…this song was written when I was only five years-old…not only was I aware of its existence as I grew up, I was aware of its strength, power and connection…and also aware of how popular it had become within the music-culture.  As a teenager, the covers began…and with this song, they’ve never stopped; straight-up I’d be lying to you if I said that I felt like I needed to ever hear another version or variation of this tune.  That being said…I’ll give real credit to Nullsaurus for pulling this song off incredibly well.  I think the chorus comes out reliably well due to the strengths that pre-existed in the writing – but it’s the verse that actually comes out with stunning effects that made all the difference in the world.  I will ALWAYS dig this song, even if I’m not directly seeking out new applicants to cover it, I can’t deny that I would never turn this tune off in any form I’ve found it in.  That main power of the chorus always comes through…or at least it should if the band/artist in question is even going to touch “Shout” – and I think in that sense you can definitely rely on Nullsaurus to have brought around a faithful representation of the full-effect of the song’s intentions and ambitions.  Beyond impressed with the sound of the verse on “Shout” and would vouch for the approach taken to this cover as certainly being one of the best I’ve heard for sure.

“Prisoner [demo version]” is a solid exercise in haunting, creepy atmospheres.  Even though the songs are quite different in sound overall, this actually reminds me a lot of “Every Generation Got Its Own Disease” by Fury In The Slaughterhouse with its eerie, menacing and threatening vibe.  “Prisoner [demo version]” definitely shows promise in the works and it’s not an idea I’d abandon by any means.  Always depends on what the goals are of course…I wouldn’t expect to hear “Prisoner [demo version]” on the radio or really even as a single – but I do think it’s an incredibly durable song that would likely become a fan-favorite.  Vocal-wise, I think it’s some of the most confident vocals we’ve heard so far from Nullsaurus…I like the energy, mood, tone, attitude and effects and think that’s all working strongly in favor for this cut.  The music is misty…very atmospheric stuff that really pulls you out of your world and into the Nullsaurus realm entirely – and I dig that kind of pull & power “Prisoner [demo version]” is already harnessing.  Lyrically it fits the sound perfectly…no reason not to green-light this one that I can hear.

Again in terms of cover-song selection…I was more than worried when seeing that there was potentially a version of Eric Carmen’s “All By Myself” coming up on the list when I saw the title “I want to be all By Myself [EP Mix].”  Someone out there explain to me the luck a person has to somehow have (and which KIND of luck) TWO covers of this song show up in completely different forms from different sources on different records in about ONE month’s time.  How is that a thing?

But you know what?  I’m not actually complaining this time.

Honestly…I’m blown away by this cover.  Main reason being, “I want to be all By Myself [EP Mix]” is so different and blissfully unique from the original that all it has retained is the essence of what made the writing great to begin with.  Somehow, Nullsaurus has achieved the impossible and taken the cheese out of this tune…which as far as I understood was scientifically proven to be unachievable.  Everything about this approach is almost like a complete 180-degree turn from the electro-pulse of the dark-alley beat to the dissonant tones that make-up the vocals.  For a song about being ‘all by myself’ there sure is an exquisite and audible amount of danger added into the atmosphere of this tune in the verse…I don’t quite know that we should be leaving Nullsaurus alone with the kitchen knives to tell you the truth.  The chorus is approached in a completely different way than I’ve heard in any previous cover and the crashing electro-wave leading into it is genius; it brightens up just enough to add an even wider-degree of accessibility to this version.  Don’t get me wrong…fans of the original are likely to think this is way too much of a variation of the classic Carmen tune – but for the rest of us, this is basically entirely an all-new experience and song through the Nullsaurus version.

“A New Reich EPK Mix” is certainly an appropriately timed track; and yes, Nullsaurus takes a stab into the political-arena on this cut.  Of the tracks I’ve heard on this EP so far, this one’s got the farthest to go still mix-wise, but the idea is certainly there.  At the moment, the vocals are really only breaking through enough in the chorus; I like that the menacing, whispering verses are set deeper into the music but think to really get what are undoubtedly some of the most defining and important words from Nullsaurus to the surface that the volume on them has to come up a bit to rival the dominance of the music.  Other than that…kind of sounds like a vibe reminiscent of the Pretty Hate Machine-era of Nine Inch Nails infused with some new-wave & gothic styles in the mix.  The beat’s a good one…I think Nullsaurus might benefit from a bit of added change-ups in the music as it heads into the chorus to help it stand-out with a bit more punch, but again, I think the idea, concept and potential are strong here.  “A New Reich EPK Mix” definitely ends on the heaviest notes with the storming of boots and foot soldiers being the last sound we hear.

The final track is “Sycophant [FINAL EP VERSION]” – a song that takes the Nullsaurus sound into much more defined electro-terrain, combining samples and a vibrant, wild beat to establish its impact.  It’s much different than what we’ve heard so far throughout the record…and I think in some ways that works in favor of creating a memorable final-cut to send the people off; in other ways I felt like it might be a song best saved for a separate release.  Everything else really sounded like it belonged together on the same EP…the added brightness of “Sycophant [FINAL EP VERSION]” was the only set of sounds I questioned whether or not would belong with this particular upcoming release from Nullsaurus.  That being said – I do think it’s a highly entertaining & dynamic electro composition that has wicked movement, flow and stunning sounds ripping all the way through it; I like the song…just not sure if it would ‘fit’ the EP as much as the others all seemed to together.

I definitely dig the Nullsaurus vibe and this set of tunes…hopefully he’ll get a chance and opportunity to make them exactly as intended through a full studio-recording one day – but believe me, as they stand right now, these are all certainly worthy of my time and ear-space.  Improvements might be able to be made in a few spots here & there, but that’s true of almost every record you’ll ever listen to in your lifetime…if you ask me, these tracks on the Nullsaurus EP are essentially ready to rock any time.

Find out more from the official Nullsaurus page at Facebook:  https://www.facebook.com/nullsaurus