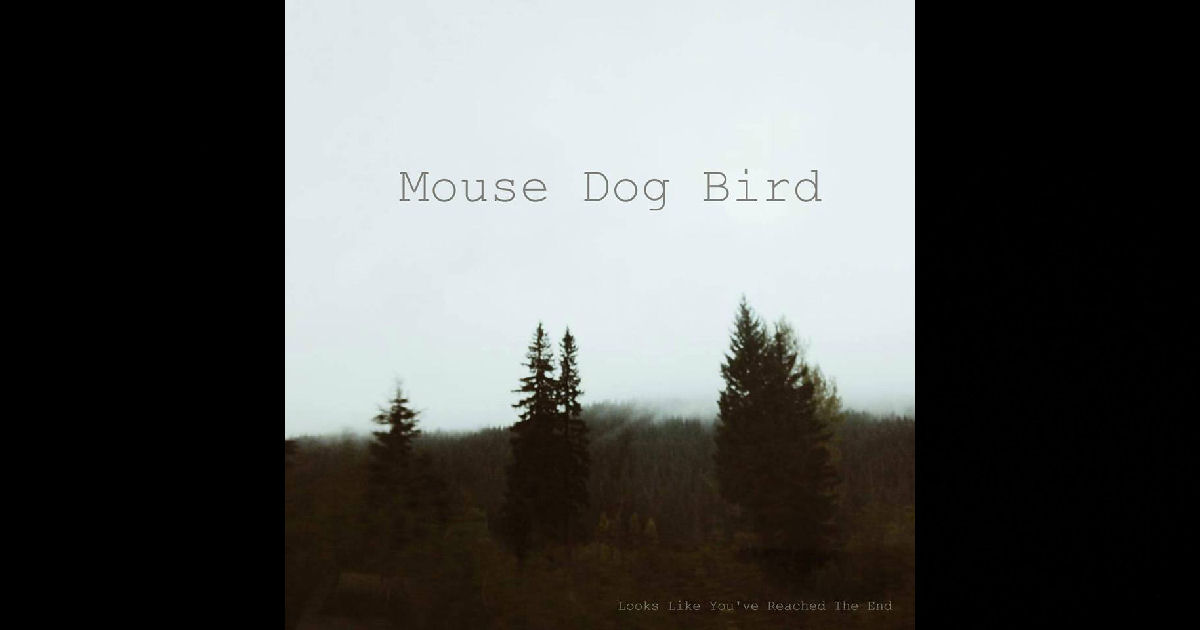 Alrighty…from the looks of things, we’ve got ourselves a new Indie/Experimental band entering the scene with Mouse Dog Bird out of Phoenix, Arizona.  A two-piece band consisting of Johnny Raincloud and Jarod Land…according to the main bio, you’ve got Johnny bringing the acoustic guitars through digital & analog sound channels and doing the vocals…and then…well…and then I guess Jarod does the other stuff.  Bio might need a bit more details…thankfully, the music they make is full of them.

From the other information you can find, Mouse Dog Bird has been putting together this EP over the past couple years and are now getting the songs out there for all to hear.  We’ve got four of the cuts from the upcoming Looks Like You’ve Reached The End EP – and though anything deemed experimental will always appeal to a narrower audience…those that dig their textures & tones will appreciate what these two dudes bring to the table.  At the very least…how about this…I’ll say that there really ain’t enough out there like Mouse Dog Bird…or at least not enough to keep me satisfied personally – so to have another band out there willing to explore the depths of imagination & sound combinations is A-OK with me.  Pre-release & all…I have no idea what order these are supposed to be in…so alphabetical it is!

“Dead Weeds And Unmated Birds” – if you’ve got love for bands like Mogwai and Sigur Ros – then what’s not to love here?  It’s not nearly enough of either of those bands entirely to be any kind of copy, but it’s certainly got enough similarities that fans of those bands & that style of sound are sure to eat this up.  Consider the ethereal atmosphere and vocals and how those resemble the Sigur Ros approach…listen to those meaty & rich bass tones like Mogwai uses in their melodies so often…and then appreciate how Mouse Dog Bird is able to combine these elements with an incredible ambience & expressive ideas to bring it all together.  There’s a majestic-meets-melancholy vibe on “Dead Weeds And Unmated Birds” that is seriously killer to listen to…the production is equally awesome; the effort has clearly been made on all aspects from the creativity in the writing to the execution all-around.  Love the mix of slightly eerie sound of the music and the haunting vocals that float through the music…I love how they’re in no particular rush to add them in, Mouse Dog Bird lets the music develop before they add in Johnny’s falsetto to complement the vibe they’ve already got going on – bold but solid move.  Using his voice as an instrument much like a Thom or a Jónsi would do – he adds a crucial element to this song and raises the stakes from where it started big-time by joining into the mix mid-point or so.  Real credit to the bass parts on “Dead Weeds And Unmated Birds” as well…they’re absolutely key to the melody you’ll find within the layers of this song, just underneath the surface but unmistakably essential.

You can hear that Elliot Smith influence come through gorgeously on “Proverba Infero” – and again, the recording itself shines as brilliantly as the songwriting does.  Love the distance & space in this mix, love the way that Mouse Dog Bird incorporates ambience into the sound, love the melody and emotion that come with the music & vocals.  Listening to Johnny climb up the tones & notes of the vocal melody he’s written into the flow he’s singing is nothing short of exquisite…that’s the magic right there.  Like many of the best songs you’ll find out there, they haven’t overcomplicated this song…the root ingredients are fairly simple ones, allowing them to maximize the potential of each element and make it really contribute to what’s essentially a minimalist composition of sorts.  Hey, I led with the Elliot Smith comment didn’t I?  You can’t expect a whole bunch of technical EDM or extreme Metal configurations coming at you right?  Nor should you want that if a song like “Proverba Infero” is an option for you instead…at least, in my opinion.  The complexity you need in this song to keep you interested is in the subtle additions made to the music & sound along the way…which are often the smallest contributions, but so entirely effective in strengthening the vibe.  The vocals just get a massive checkmark in the win column all around…I think Johnny’s written an immaculate melody here and pulled it all off exceptionally well…it’s a breathtaking performance, truly.  The acoustic guitars are spot-on, the melancholy melody is incredibly gorgeous, thought-provoking, and perfectly played.  While it’s unlikely to find a cut like “Proverba Infero” on the radio anytime soon – Mouse Dog Bird already knows that challenge exists for them and that’s what the freakin’ internet is for anyway.  Sounds like this are guaranteed to find an audience out there online…it’s the quality of their music that’ll keep them; and if “Proverba Infero” is any kind of indication of what we can expect from Mouse Dog Bird, sign me up.

Remember…just because something can be described as experimental doesn’t mean things happen by accident.  Tracks like these have been labored over from performance to production I’m sure…because no stone has been left unturned when it comes to the attention to detail here.  “PTFMK11” is one of the most heartbreaking melodies you’ll hear this year…the forlorn way that Johnny sings it, the downtrodden vibe of the main acoustic guitar is equally crushing.  Hard to say on this cut once it hits the mid-point and the bass & additional elements join in…it’s always going to be tough to reign-in a band with experimental tendencies, let alone one with two members in it where the self-editing becomes extremely hard to do.  This is one of those moments where I’d probably recommend dialing it back even further if I’m being entirely honest – I felt like Mouse Dog Bird nailed the first half of this song about as hard as a song could be nailed and that it didn’t need anything else at all to stand out.  And so enters the great debate…because I know what so many of you songwriters out there would say – it’s nearly five minutes long…”PTFMK11” HAS to go on to change and do something else, doesn’t it?  No!  Cut the idea short, keep it tight, move on.  “You Never Wash Up After Yourself” right?  Mouse Dog Bird will get what I’m getting at here with that comment…and that’s really all it needs to be.  Sometimes less is more.  When it comes to the main melody and the incredible recording on the vocals and guitars – I think “PTFMK11” is absolutely unbeatable in its flawless, clean, & clear sound…gorgeous and spellbinding.  And don’t get me wrong…they haven’t created such a calamity in the second-half of this tune that you wouldn’t stick with it…if you dig the beginning, you’ll easily ride this one out; all I’m arguing for is that sometimes you can get away with keeping things static when everything is locked right into where it needs to be.  Also, truthfully, I’d take a full-on repeat of the sound & approach to that first-half all over again, keep this song the same length or even make it longer…I’d never once complain.  “PTFMK11” has an absolutely captivating sound that heads straight into your soul & carves itself out a new home there.

There are over 9000 reasons to support the idea they’ve got goin’ on with the final cut I’ve got here, called “We Are Many (Parts 1&2).”  Taking you on a true sonic adventure nearly eight minutes in length, the artistic nature & beauty of this band shines here, along with the intelligent & focused thread that lies within the subtext of their style & sound.  You can hear the insightful social commentary running throughout the lyricism on “We Are Many (Parts 1&2)” – and they’ve come up with a melody that eventually breaks through that would make Sparklehorse or Grandaddy proud.  Mouse Dog Bird is using multiple points of texture and contact to connect to this song to you in a 3D-like fashion…some of those will work magnificently in pulling people in…and the rest will no doubt be seriously confused, which is fine.  Using static is always going to send half the listeners spinning right off the deep end wondering whether or not they’re hearing a glitch or an intended element of the song…and that’s just kinda how it goes.  No worries on that…let them lemmings download the song in question multiple times only to find that’s the way it’s supposed to sound & drown in their own irreconcilable confusion – the rest of us out there that ‘get it’ will at the very least dig something like this for its uniqueness, if not for the full-on contribution it truly makes to “We Are Many (Parts 1&2).”  Excellent recording on the acoustic once again, loved the layered-vocal technique here and the haunting vibe that creates or how it thickens the emotions on display at such crucial points in the lyricism…you feel this one…and ultimately, that’s because they’re writing about us all to some degree here.  The absolutely BRILLIANT switch from what sounds like mono-to-stereo as the song heads towards the three-minute mark is about as powerful as going from black & white to color in the Wizard of Oz…it expands this idea remarkably…almost as if you didn’t realize all this potential for sound was around you to begin with, then all of a sudden, it’s there.  The vocal melodies that start around 4:15…are…SO AMAZING…that I have no problem giving Mouse Dog Bird my genuine seal of approval both now and in the future; there’s so much focus being applied in this band and so many stunning ideas in the writing that I’m absolutely confident they will always come up with something compelling & captivating to listen to.  The melodies they write sincerely connect – and the imagination in their execution appears to be limitless…so we’ll never really know what to expect but awesomeness.  I wouldn’t want it any other way…and from the sounds of things, neither would they.

Find out more about Mouse Dog Bird from their official website at:  http://artistecard.com/MouseDogBird