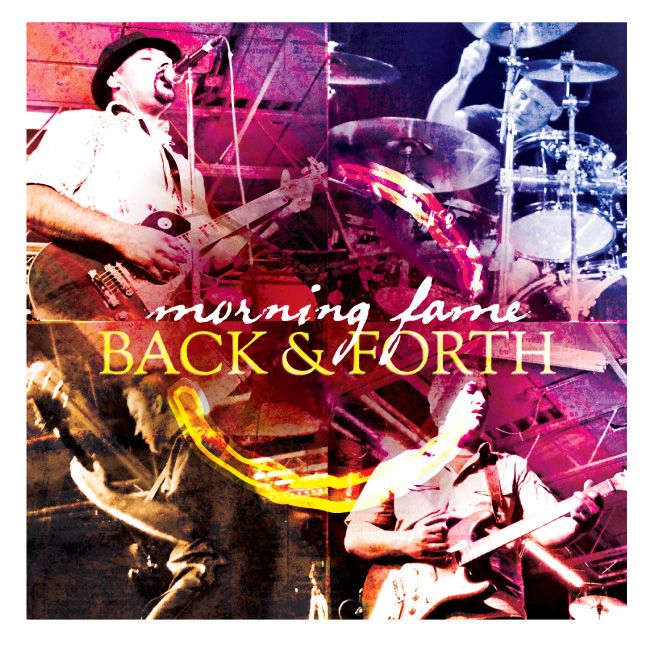 Morning Fame – Back & Forth + Cast Away – Album Review

It’s certainly not because I don’t like the track – I’m a huge fan of the opening track from Morning Fame on this album Back & Forth, called “Cast Away” – so much so that the video was featured on our show SBS Live This Week and ranted/raved about! So just so we’re clear – no love lost on this track whatsoever; in fact – I’ll click the album repeat setting to make sure I get a listen in once again to what is a killer lead off song and single from this band from Toronto, Ontario, Canada.

So I suppose I started at “The Colour Of Sound.” The standout aspects of what I had enjoyed so much in the video and review of “Cast Away” on the show were completely prevalent here once again: well written songs, inventive guitars and vocal flow, steady rhythmic bass….and where on EARTH did they get this drummer? Alan Dennis is a freakin beast back there and stands out immediately in “The Colour of Sound” demonstrating that the band isn’t simply writing songs with a steady beat – that steady beat becomes inventive and explorative on Back & Forth, always keeping it interesting to listen to.

Once “Joker’s Game” and “Turn to Stone” played – I knew EXACTLY where these guys were at – and for me that was a super exciting conclusion…I’m sitting and listening and thinking to myself – “Self, these guys remind you of the Gin Blossoms don’t they? Why yes, Self…they sure do…” Whatever – it gets weird in the studio sometimes…especially when I answer like that…

I did a little digging. Turns out if you look them up on Facebook you’ll see that not only are the Gin Blossoms the first listed influence (Victory!) but they also have my two favourite bands of all time listed right after – R.E.M. & The Cure. The only one I found missing that I truly felt should have been there would have been to reference the Canadian band called The Watchmen, not too far away from them in Winnepeg…get on that bill guys – you’d fit there quite nicely!

Meanwhile….if I could simply stay on topic….

“Joker’s Game” really has that element that made songs like “Day Job” or “Follow You Down” popular for the Gin Blossoms. Lead singer Vik Kapur is able to replicate that sweet sound that also made the voice of the Blossom’s lead singer Robin Wilson such a treat to listen to every time and the ideas on great songwriting never seem to run out on this album. The sweet guitar riff on “Stranger” is another perfect example of them writing tremendously melodic music, incorporating a female backup singer as well not often used but a very welcome harmony each time.

In talking with Joe Liranzo – the guitarist for Morning Fame – he had made it clear to us that this album, Back & Forth, was a collection…a musical documentation of this band up to the current point of their newest single and video for “Cast Away.” It captures the evolution in their song writing and certainly gives you a complete picture of what Morning Fame is all about.

As they begin their decent into the final tracks of the album – “Time” is another example of Alan Dennis’ drumming ability – so rhythmic, beautifully written and timed – the drums continue to be a major element that sets Morning Fame apart from simply being a re-hashed version of the mid-nineties heyday of pop-alternative. This is a band that has innovative ideas on how to bring more to that clean pop sound – listen to the drums in the third minute of “Time” and you’ll hear what I mean. This might be a sound you feel like you’ve heard before – but with intelligent twists that keep it updated and fresh to listen to, even if it is an album more like a retrospective.

As they close out with “Long Time Waiting;” – I know that I’ll be back to listen to this album Back & Forth again and again. There’s too much here for me to ignore and I think that the progression I’ve heard in the music of Morning Fame leads me to believe that there’s still even better yet to come from this Canadian crew. The recording and the songwriting are there – as this band continues to realize just how valid a place it has within this music scene and builds their confidence – they might find out this is music that could very well be written in that more anthem-like U2 or Coldplay style, should the band want to take charge of stadium crowds and have their tunes sung back to them!

However they choose to do it – they’ve got me singing along. As promised – this album on repeat led right back into “Cast Away” the latest song and single from this album in review. Man – I just can’t say it enough – I dig this track and it gets lodged in my head for days! While this review might end here where the whole thing had started – right at the beginning; this album likely stands to repeat and continue on long past my writing it.

Go pick one up! Check out and support Morning Fame at: https://www.facebook.com/morningfame