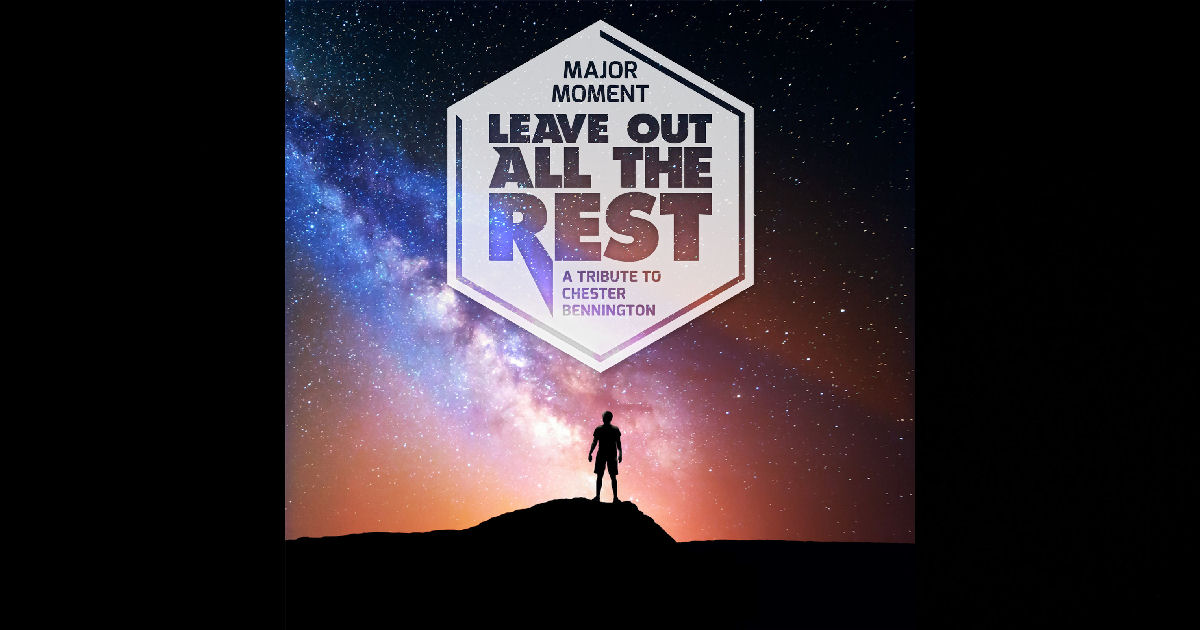 Major Moment – “Leave Out All The Rest” – Single Review

The story is tragically far too often the same.  Someone we love, admire, & respect in the world of music leaves us all too soon, just like Chester Bennington of Linkin Park had done when he died last year.  Those moments often unite the fans in incredible ways…and then there’s a few regrettable ways that it now pulls us together, with scads of cover songs quickly recorded and posted online without a second thought beyond the pain they’re experiencing personally and the genuine need to communicate that.  I’ve always believed that a real tribute doesn’t happen immediately post-mortem…and I don’t think they should.  I also think that, more than a year later here with this cover of Linkin Park’s “Leave Out All The Rest” by Major Moment, you’ll hear all the proof as to why it actually matters when it comes to taking your time if you really want to pay your respects.  Because when an artist truly makes an impact on us, it NEVER leaves us…that person changes us forever – for example, for greybeards like me, I still think of Kurt Cobain at least every three or four days if not more-so – and we’re approaching what, more than twenty-five years since he passed?  My point is that a ‘tribute’ posted up less than twenty-four hours after you hear of such a tragedy happening while the body is still warm…well that’s no tribute at all dammit.

This.  THIS is what a tribute really sounds like.  Major Moment creates a major moment here without question and has clearly poured their heart & soul into making every second of this cover have an impact.  They’ve brought the spectacular songwriting right to the surface in their version and put the melody right in the spotlight – this has always been one of my favorite Linkin Park songs as well, so understand, if they half-assed this, I’d be willing to call them out.  I’m happy to report that they did not.  They’ve drawn on those pop-inclinations of the original and put them front & center for all to hear; I’m beyond impressed with how this came out overall and think they couldn’t have possibly asked for more out of themselves – Major Moment found the essence and heart of what makes “Leave Out All The Rest” connect to us as listeners.  This is a performance that they should truly be proud of.

Andrey is a completely amazing singer…I could listen to this dude all day long and never complain.  That being said…if I’m being honest…if I’m being truthful…if I’m telling you the REAL DEAL dear readers, dear friends…Major Moment might find their ultimate highlights on the microphone when Alexandra is added-in to the backing vocals – they sound absolutely fantastic together.  Guitars from Gabriel are 100% captivating…the opening of their version of “Leave Out All The Rest” is so gorgeously beautiful & haunting…and again, that first moment where they punch into the chorus and Alexandra comes in to support Andrey?  MAGIC.  Stunning.  Breathtaking.  Serene.  And above all things, truly sincere.  Quite honestly, I don’t think you could possibly create a cover this strong without the artist or band inspiring it having meant the world to them, know what I mean?  You can tell the impact that Chester’s music has made on the players of Major Moment, because you can hear it in the way they play & sing this song with everything they’ve got.

From its humble beginnings, to the most ultimate lighters-up moment you’ll hear this year – Major Moment takes “Leave Out All The Rest” to fantastic heights as they expand this idea into their own style & sound even further.  We’re talking musical-fireworks by the end here people…the progression from beginning to end should seriously drop your jaw by the time this song switches from its innocent opening to the grandiose maximum of its full potential.  There’s absolutely zero to complain about here – the music is remarkable, the vocals are outstanding, their approach to this song is phenomenal.  I loved how the first two & a half minutes actually reminded me of like…how Styrofoam might take on covering this song, which is always a good thing in my books.  By the end, they expand the sound to such a massive finale it’s got that all-inclusive everybody’s involved feeling like seeing Arcade Fire play live like approach, especially with those big background vocal moments adding to the intensity in the electrified atmosphere.  It’s that emphasis on the melody and the emotions that made the original so memorable, finding that authentic connection they have to it as individuals, and releasing that energy as a band, supporting each other at every turn along the way.  There’s a beautiful catharsis at work here…a real one…everything about the Major Moment version of “Leave Out All The Rest” to me sounded like genuine respect for Chester and the music he made.  The focus, execution, attention to detail, and key ways that they’ve adapted this song to their own style & sound is nothing short of completely impressive and entirely compelling to listen to – they nailed this.

Find out more about Major Moment at their official website at:  https://www.majormomentband.com

Tags: Leave Out All The Rest Major Moment Singles sleepingbagstudios