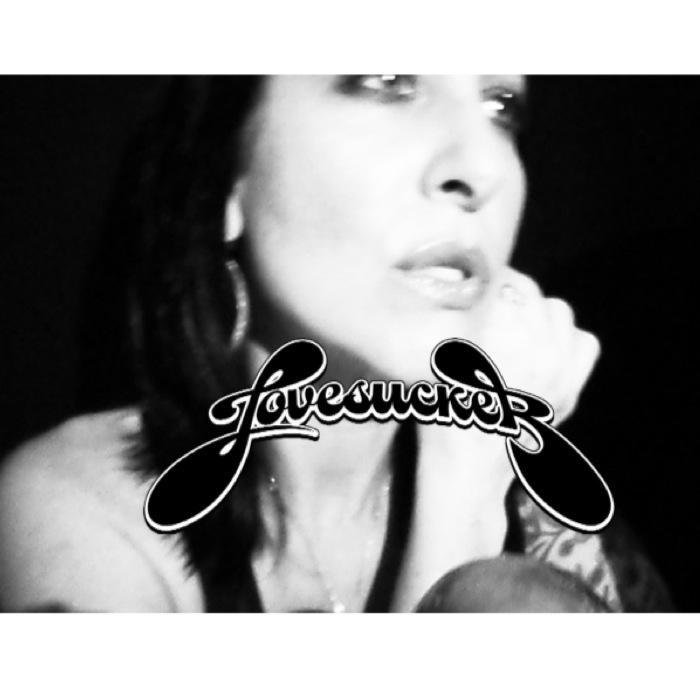 It’s been an excellent day in the studio here. Started it off interviewing the fantastically-talented Kristia Di Gregorio and now here I get to continue on this wicked start with even more great music coming through my speakers courtesy of Lovesucker. This new self-titled EP has a high-level of sound-fusion and successful combinations that show the depth of a band that is clearly reaching towards their own unique & defining signature-style.

Take the first song for instance…”Mississippi” starts out with a dark-funk combo you wouldn’t see or hear coming even if you read the musical plan of attack on paper and had the notes right in front of you. Interesting point of synchronicity…Kristia my interview from earlier today, also identified with a somewhat ‘gypsy’ aspect to her sound; and if you look at Lovesucker’s social media you’ll see them self-described in the best of ways – and I quote – “East Coast Garage Grime meets West Coast Gypsy Soul.” Like, how awesome is that?

However you might end up describing it…call it dark-funk or whatever you might feel, there’s no denying that they’ve come up with a sound fairly unique to the here & now. They display real versatility in the way they come up with parts that pull influence from the past and give it a new-twist and a stamp of their own. “Mississippi” brings in a funk element to the music through outstandingly diverse vocals that really push the limit and go for broke every time in some supremely committed performances; and it all starts right here with Crystal Crosby’s conviction. Musically, it ranges from something that Beck would be proud of in the verse, to nearly becoming “Touch, Peel And Stand,” by Days Of The New in the chorus. There’s already a large bridge to distance the gap between those two sounds; impressively, Lovesucker pulls off this difficult combination that includes everything from electro, funk, rock and soul extremely well and bring you in immediately to the EP with an energetic invitation that’s exciting to the ol’ earholes.

The second-cut, “Show Me” brings them into a more funk-rock based sound, which they’ll continue on “Sayanara Messiahnyde” successfully. As far as I can see…Crosby is making these wicked tunes alongside only one other member, Zoltan Von Bury, and these two should certainly be commended for their efforts here on this EP. It’s every bit as ‘full’ as you could want it to be. Innovation-wise, there’s a TON going on…especially when you consider it’s only coming from two people; but the balance of the music overall is more than impressive. Nothing is blown-out, nothing is over-the-top, nothing is jam-packed so ridiculously full; Lovesucker is NAILING it when it comes to what to & what not to include in their sound. As widespread and diverse as their sound plays out throughout the EP, every additional instrument, note & beat serve a purpose; that’s an understated and completely incredible achievement in music and I think that needs to be recognized here. Listen to the additional effects in “Don’t You Leave Me Now” and you’ll hear exactly what I’m talking about. Lovesucker has the ability to range through a whole exotic host of sounds and come out on top by adding in elements that truly add to the music, make it dynamic and vibrantly alive. I think it’s a guitar-effect that comes bursting in through a digitally-twisted sound on “Don’t You Leave Me Now” though I’m honestly not sure…but whatever it is…I kind of like, ummm…NEED it. Whatever that sound is, is so good that I not only love that track, but I feel like I could listen to the sound by itself and the way it’s played on repeat for another five minutes on its own.

I’m firmly a believer in the strength of conviction. Whether it’s the music you play, or your personal beliefs or even the freakin’ SANDWICH you want to make to feed your face – DOING whatever it is with real passion and commitment to the art & craft (sure, even your sandwich) will make it that much BETTER. It’s like the secret ingredient in the recipe of great music; it’s what really pulls us in with excitement…the absence of commitment easily translates into boredom.

And now let me just say this out loud and write this down while I do – because I BELIEVE in the words I write; there is more conviction in Crosby’s voice than you’re apt to hear in any damn band. This woman completely rocks the confidence and sound necessary to be relentlessly captivating and through her own inventive ways, lyrically steers these songs in new directions with commendably innovative vocal-patterns.

To wrap this EP up cohesively, these two return to dark melodies on the final cut “Guns And Gasoline.” Borrowing from the grunge-era with a sound influenced by Nirvana’s Bleach, with perhaps an acoustic Alice In Chains-ish aspect to it…they make this last tune provide the impact it should just before the two-minute mark with a brilliant switch in the tune. Excellent hook in this song; throughout the Lovesucker EP really…there’s just so much to grab your attention and really keep it captivated & entertained. Definitely the kind of band that I’d want to see live and certainly one I’ll want to hear more from in the future – there is tremendous awesomeness brewing in this band.

Find out more from their official page at: http://www.lovesucker.com