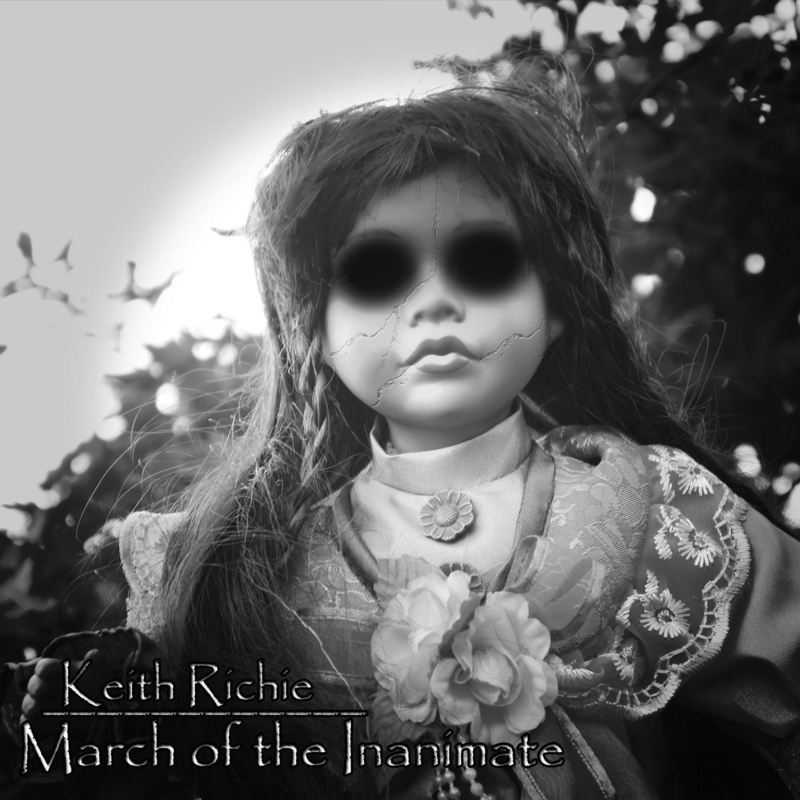 I tend to get lost hypnotically into the music of Keith Richie – it’s a pleasure to have more music to hear from him and have it represented up here on our pages again so soon after reviewing his latest album Ambient Highways. Released in late October of 2014, this album is anything but old at all – it’s still fresh out of the package and Keith Richie is obviously a man that never stops making music for the pure love of the craft. I was actually quite surprised to find this had been released not all that long ago – and given the inspiring qualities of Ambient Highways, you’d almost expect that one of these two releases would have come out weaker than the other has – and that’s totally not the case with Keith. Apparently as the legend of Soundcloud will go on record to show, he made himself an amazing ambient-textured album with March Of The Inanimate and then just hopped on over to make another excellent album with Ambient Highways just shortly after. Must be nice to have all this creativity stored inside just waiting to be recorded!

And wouldn’t you know it – I might actually like this album here even more than I liked Ambient Highways, which says quite a bit ‘cause I loved that album. This might be a complete ambient masterpiece that Keith has created in March Of The Inanimate however…or at least to me – I’m really connecting hard with these dark melodies. The opening song “Chasing Shadows” looms like a massively ominous figure waiting for the opportunity to stomp your bones and crush them into dust underneath its feet. It’s about as big in sound as the ambient genre can get…many regard it as simply ‘background’ music, but it can be SO MUCH MORE and Keith proves that instantly in this haunting beginning to March Of The Inanimate with “Chasing Shadows.”

Incidentally…the album itself is based around the concepts and ideas found in old horror movie classics. Nothing comes directly from any of them…there’s nothing sampled in here and Keith isn’t cheating his own inspiration in the slightest throughout this effort; it’s INSPIRED by…not a cover album by any stretch. What he has done here is audibly fantastic…he’s managed to fit right in with the scores & soundscapes that have inspired him without ever borrowing from the existing magic of others – he’s completely created more than enough of his own! Both “Out Of The Fog” and “Forbidden Cottage,” the next two songs to come at you, are freakin’ genius in their layered textures. Keith reminds me much of Mike Patton through his instrumental soundtrack-style music, and even more-so, the masters of the atmosphere themselves, TomandAndy. “Forbidden Cottage” has that same supernatural, creepy, eerie and distant, captivating magic that you’d find in one of their dark collages in sound, and “Out Of The Fog” mightily mixes the light & dark together for a completely intense and haunting triumph. The melody in “Out Of The Fog” with the piano is just immaculate…this is the kind of music that can live in my speakers permanently as far as I’m concerned.

Of the set of seven, “The Chest” takes a step back towards the more extreme-ambient. Aptly-titled here…it’s like the final moments of the rise and fall of someone’s very last breath and all the magic, mystique & wonder many of us believe surround those last bits of life. While it wasn’t necessarily my favourite of the seven, I thought the subtle switch in the middle of the song was quite beautiful…it really glides into a whole different gear smoothly. A gentle & tender composition, “The Chest” sends the album into the quiet and into the beginnings of its title-track, “March Of The Inanimate.” Slowly building, this opus-magnum incorporates some very haunting piano-melody and an increased intensity in the dark-electro, pulsing rhythms. Again…considering the subject matter he’s based this music on – this fits right in there, right into the gritty underworld of horror-movie-mania; “March Of The Inanimate” is musically-menacing to say the very least. One of the longer tunes and justifiably so – “March Of The Inanimate” is certainly captivating, completely engaging and 100% worthy of its titular status.

Finding some beauty in the darkness, “Crystal Projections” is a sweet piece of ambient, crystalline and delicate…fragile sounding at times. Cleverly placed vocal-chorus sounds fill the background at times with angelic tones; next to “The Chest” this is the most low-key & subtle ambient song on this particular record…Keith’s done a great job of mixing up the atmospheres, moods and sounds but also able to give the entire album a real smooth transitioning all the way through as it tells its instrumental tale. “Crystal Projections” beefs itself up slightly towards its ending with a few unexpected sounds poking you to make sure you’re still with him here towards the end…this dreamlike track is bound to set your mind adrift in several directions and these added extras into the song’s last minute serve to make sure you’ve got your attention on the final epic, “Running From Shadows.”

Cohesion like this is something to be admired; the way that Keith brings around the final moments and conclusion of March Of The Inanimate is excellent. “Running From Shadows” shows just how far this story has come, how things have changed throughout the course of its runtime…and where its musical protagonist has ended up. Very reminiscent of the mood & atmosphere of the opening track “Chasing Shadows” – Keith found himself a perfect ending here to make this entire album make sense and wrap up like he had planned every note before he even recorded one.

For ambient stuff…this album is all-kinds-of packed with captivating ideas, melodies and soundscapes; Keith Richie is clearly a man that has found his purpose in music and makes the absolute most of every minute on March Of The Inanimate.

Find out more about him through Keith’s official homepage here: http://www.krichiemusic.com/