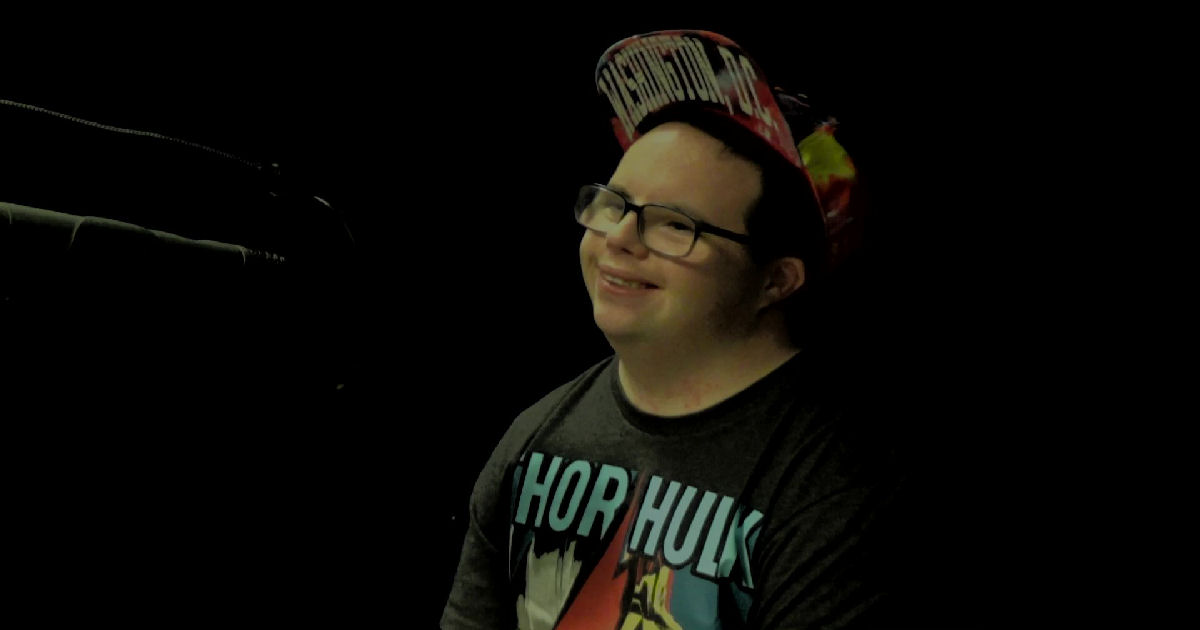 Technically, even though this is a debut EP, Jonny The Wolf has been rapping with the crew at Tang Hall SMART CIC for over 4 years sharpening his skills and spittin’ rhymes throughout the years.  He’s developed his own signature style that’s unmistakable…he’s got a champion’s attitude and the focus required to reach the goals he’s set for himself…and he seems like an all-around great guy from everything I’ve heard in his music and read about him…that inspiring type of emcee that improves the mood of everyone around him.  He’s got a point of view…he’s got an identity on the mic…and he’s got an EP full of relevant sounds for what’s out there right now in today’s world.

He also has Down’s Syndrome.

Refusing to let that become his defining attribute, Jonny The Wolf has battled all the odds to become the emcee he is today…and he’s winning that war, hands down, in the most positive of ways.  You’ll hear throughout the songs on the new EP, Introducing The Wolf, that this homie is all about rhymes and good times…and considering the work he’s likely had to put in to get here, that positivity and fun you’ll find in his music is already more than impressive.  I think this guy comes with respect well-earned, but proves it even more with what he’s bringing to the mic & what he’s doing for music.  I have the feeling that Jonny The Wolf is fully aware that he’s representing a ton of other people out there with learning disabilities worldwide by pursuing his own dreams…that’s a lot to shoulder on his own – but he’s got a great crew of talent surrounding him as well to assist him in bringing this project to fruition.  The fact remains that Jonny is not only doing this for himself, but by proxy, for many people out there…he’s giving a voice to a whole group of amazing people out there in the world that might have thought something like making an EP or rapping wouldn’t even be possible.  No matter what it is that you love doing – there’s a way to do it if you truly love it, no matter the circumstances, obstacles, or struggles facing you… Jonny The Wolf is all the proof of that any of us should ever need.  The completion of this record will inspire many out there…this is undeniably an achievement & accomplishment in multiple ways…I can only imagine that Jonny is freakin’ STOKED to have this EP officially coming out into the world on October 1st this year.

Because THAT is when things get REAL ain’t it?  It’s almost here – Introducing The Wolf.

“Love Shark” makes use of killer bass & guitar-lines that set the stage for this emcee to put his personality out there on display in a bold rock-influenced beat that has tons of electric energy to it.  You can tell that Jonny The Wolf is feelin’ it – dude comes out swinging hard and making his presence known right from the moment he grabs the mic.  And perhaps this is where the real magic of what Jonny does comes to life for the first time – you realize quickly as a listener that having Down’s Syndrome hasn’t dictated what opportunities he’s been able to experience.  All the proof you need is the wicked music he’s working with here – any emcee out there would be stoked to work with this cut, and Jonny The Wolf gets to make this one his own.  Confidently rapping his bars, another important aspect of his sound is revealed – and it’s quite a revelation really…you realize that not only does having Down’s not hold him back in any way – he hasn’t let that define him, and at the same time, here, it’s an asset in the musical-realm, truly.  When every artist, band, singer, songwriter & rapper has their own personality, perspective, style and sound – that there’s absolutely no less validity in what Jonny is doing, not even the slightest.  He’s got clever lines, he’s got intense emotion in his tone, and he knows exactly where the energy is in the music to spring-off from – and as a result, “Love Shark” comes out in a mix that’s just as much fun to listen to as it is menacing when it comes to the savage delivery on the m-i-c.  You could call it a love-song…of sorts…I mean, don’t get me wrong, of course Rap as a genre is just as capable of containing a love-song in there somewhere…I suppose I’m just sayin’ like…like…for REAL – you best keep your hands off of Jonny’s girl!  Sounds to me like he’s putting a lil’ bit of personal charm into this cut and making some moves of his own in this tale of life & love he’s got goin’ on here…ladies take notice!

I honestly don’t know one way or the other that having Down’s Syndrome has made this take more ‘effort’ than what you’d hear from any other artist or band out there when it comes right down to it.  I’m probably not saying any of this correctly…but what I’m getting at is that, when you hear how Jonny The Wolf feels the flow and rides the vibe of “Rockin’ Out” – I mean, you gotta dig this, don’t ya?  Everything sounds like it comes naturally to him and he’s executing confidently, clearly, and ripping it up on an extremely cool beat.  So when I’m saying ‘effort’ – what I’m really saying is, when you’re doing what you love and as listeners, we can HEAR that…well then it’s not really ‘effort’ at all is it?  It’s just what should be, nothing more, nothing less, full-stop – everything in its right place, as they say.  I think Jonny The Wolf has done a brilliant job on “Rockin’ Out” and taken this EP to the next-level right away; I think his personality & character shine through, I think he’s got a lot of soul in his tone and heart in his rhythm & flow.  Most importantly perhaps – there’s nothing about Jonny holding anything back here – he’s certainly not timid or shying away from shouldering the responsibility of representing an entire community of people out there with similar dreams like he has and his genuine desire to entertain.  You can hear Jonny The Wolf embracing his moment in time and really finding the groove – he’s puttin’ in the rhythm & poetry – and he really has an authentically endearing sound that welcomes you in to listen on “Rockin’ Out.”  The entire vibe & jazzy swagger that this cut contains feels like fantastic energy from beginning to end – and I think you really hear how the music has inspired Jonny The Wolf to keep it loose & bring his A-game at the same time.  He goes personal here throughout quite a bit of the lyricism on “Rockin’ Out” which I also think is an excellent call on his part – you really feel like you get the heart of this artist revealed here.  And the piano-notes & bass combo on this tune?  Don’t even get me started…seriously awesome to listen to…smooth-as-smooth can be and it all sounds incredible with the mix on the drum beats.

I should mention as well… Jonny The Wolf is surrounded by great people.  All these cuts are produced by D.Ni.L – who I hope by now you’d all know from me shouting about his musical-talents here on the pages earlier this year with the release of the record Boy.Inside – you HAVE been listening, RIGHT?  For the sake of your own ears, I sure hope so…killer album from this year – and it’s awesome to hear his influence in the sound of the music on this record as well.  Take the middle-cut “Unboxing” for example – that’s an insanely cool vibe going on there – and once again, you can hear how it’s inspired Jonny to get right into this low-end fueled groove.  Nevermind the paper-stacks, Jonny’s got himself focused on “Unboxing” the goods and stacking up the music-equipment – this is clearly an emcee with his eye on the prize!  Don’t believe me?  Check it out for yourself and have a look below at the first video from the Introducing The Wolf EP and see how much loot this dude is hauling in while he’s “Unboxing!”  Coming atcha direct from the fine people over there at the Musication label – I’m loving this cut from the EP.

No matter how you slice it, what Jonny The Wolf is doing is both an achievement he should be proud of, and breaking all-new ground in music that’s IMPORTANT to pursue.  It’s admirable, on every level as far as I’m concerned.  I’m probably a little more partial to the more rock-influenced sounds of the first two tracks, but I’m definitely not opposed to what I hear when he goes “In The Club” either.  Plus, it adds another dimension to this emcee’s sound and another style of approach to put on his growing resume – bonus!  Working subtle low-end vibes & synth sounds into a chilled-out groove that’s focused on keeping the fun flowing, celebrating friends, love, & good times – “In The Club” is more than likely an extension of the upbeat attitude that Jonny has both on & off the mic.  Going club with the sound here was a solid move and one you can tell he was more than happy to make, it gives the man more room to flex more of his skills and say what’s on his mind.  You can hear from the words, Jonny The Wolf is a lover, not a fighter – he’s looking for the ladies “In The Club” and fully on the prowl.  Sign me up to be Jonny’s wingman any day of the week – sounds like he knows what a good time is all about.  He’ll embrace the electro-style even further on the final cut “Dub Wolf” – which takes the club sound and gives it a dark twist that makes the approach to this song sound even more intense.  I dig Jonny’s flow and the way each stream of his vocals comes out bursting like a free-flowing thought spit right from the top of his dome and into the mic…a track like “Dub Wolf” again puts out that impression that Jonny The Wolf is more than comfortable as an emcee – he’s straight-up owning his moment and keeping it real!  I’m serious…he’ll go on to rap about surgeries he’s had and where they took place anatomically…I mean, he doesn’t get too graphic or anything like that…but you’ll certainly understand what he’s rappin’ about.  “Dub Wolf” has an intricate & complex, staggered structure and sound to its flow, making for a jagged & unique cut that allows Jonny The Wolf to take his own performance up an additional notch or two before the end of the EP to end this experience on memorable highlights.  Impossible not to be impressed by what he’s pulled off here…he’s beaten the odds in every way, proving to himself and indeed the world listening as well, that he’s here, he’s got the skills, he’s got a genuine contribution to make to music…and that there’s not a single thing that can hold him back from reaching his dreams.

Make sure to stay up to date on all things coming out from the incredible crew over there at Tang Hall SMART CIC and be ready for the official release of Introducing The Wolf by Jonny The Wolf at the main website there on October 1st – click here:  http://www.tanghallsmart.com