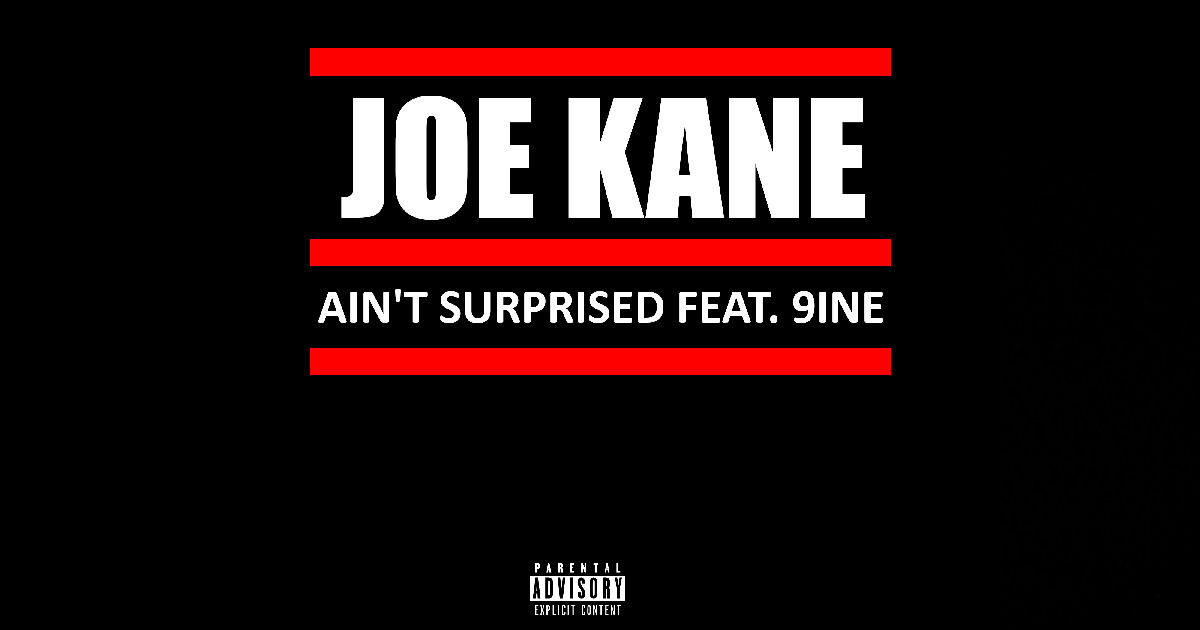 YOU might be surprised, but rapper Joe Kane ain’t, and neither is his homeboy 9ine.

Let me tell y’all right from the drop…all you reviewers, critics, friends & fam that end up listening to the brand-new single “Ain’t Surprised” by Joe Kane & 9ine…they’re gonna know, 100%, whether or not you ACTUALLY listened – so don’t try to pull any bullshit on’em, trust me.  If your eyebrows don’t hit the roof above where you’re sitting at while listening to the words of this cut for the first time, then y’aint really hearing it.  And if your response to Joe or 9ine askin’ ya ‘what’d you think about this track?’ is nothing but a simple ‘yaaaaa good song man’ – I’m tellin’ ya, they’ll know you’re just payin’em lip service.

Because if you’re REALLY listening to “Ain’t Surprised,” then you’d already know, these two homies are gettin’ all the lip service they need – you feel me?

This single is DIRTY yo!  Joe Kane and 9ine are on the prowl and lookin’ to fuck on “Ain’t Surprised.”  Together, they hit their respective verses & bars with precision, swagger, and style while delivering line after line that details wild nights of that good-good debauchery & mayhem between the sheets with the ladies from around town – or wherever they’re at, whenever they’re at, I’m assuming.  Sure sounds like it – they spit with more confidence than you’ll hear at last-call at the bar that’s for certain…sounds to me like Kane & 9ine are much more on the ball than that.  In fact, if you’re listenin’ to these words they’re laying down, you’ll know they’re 100% on top of their game – they can practically read minds!  They can see it in the very look of the eyes and they KNOW that you’re DTF before you even approach their table.

So don’t act surprised yourself when you see they “Ain’t Surprised” at all – because they know why you pulled up on’em.  If you’re there, you know it’s cause you’re looking to get down for the night.  You’re looking for that “pipe” or that “bone” as they so eloquently describe their dick & balls & man-parts & whatnot in the lyrics of this new single.  You get the point – and the full point at that, not just the tip.

Kane leads the way with energized rhythm & flow of the hooks on “Ain’t Surprised,” tackling the bars afterwards with a smooth & controlled confidence that gets the imagery of this scenario across in-full.  Handing off the mic to 9ine, the antics amp-up even further – these two work really well together & bring their own style to the mic for one cut full of hot results; they clearly put the effort into this track to make it bang with entertainment & dynamics shared between the vocals & music to have it all stand out like it should.  The beat’s tight, the emcees are tighter, and the results come faster than yo momma!

As to whether or not this gets viewed & heard as misogynistic or realistic, that’s gonna be up to every set of ears individually out there…and keep in mind, for many, subject matter actually doesn’t matter at all as long as the beat is something they can bump loud, which you definitely can with “Ain’t Surprised.”  Bottom line is however, that you can fully assume from the way they lay down their verses & what they have to say in the details, that these two homies have no problem at all tossin’ up a middle finger to the sky as they say what they want, how they want, whenever they want to say it, and at all times.  Respect.

I mean…you can be that person if you wanna be…you can get all up on your political soapbox & shout this down if it really makes you feel better…or you can just relax a lil’ and turn this up instead…maybe have a good time for once in your life and either laugh at the way they flex humor into these rhymes, or be impressed by the finesse they put into the mic when they rap…you don’t have to always be on-guard for social justice when it comes to entertainment.  Sometimes a wild weekend just is what it is y’all – and it’s artists like Joe Kane & 9ine that aren’t afraid to get right into the mix and survive to tell the tales.

The new single “Ain’t Surprised” with 9ine comes from the upcoming Joe Kane record COPACETIC coming out at the beginning of 2020 – make sure to find out more about Joe Kane in the meantime at the Gram right here:  https://www.instagram.com/joekillakane