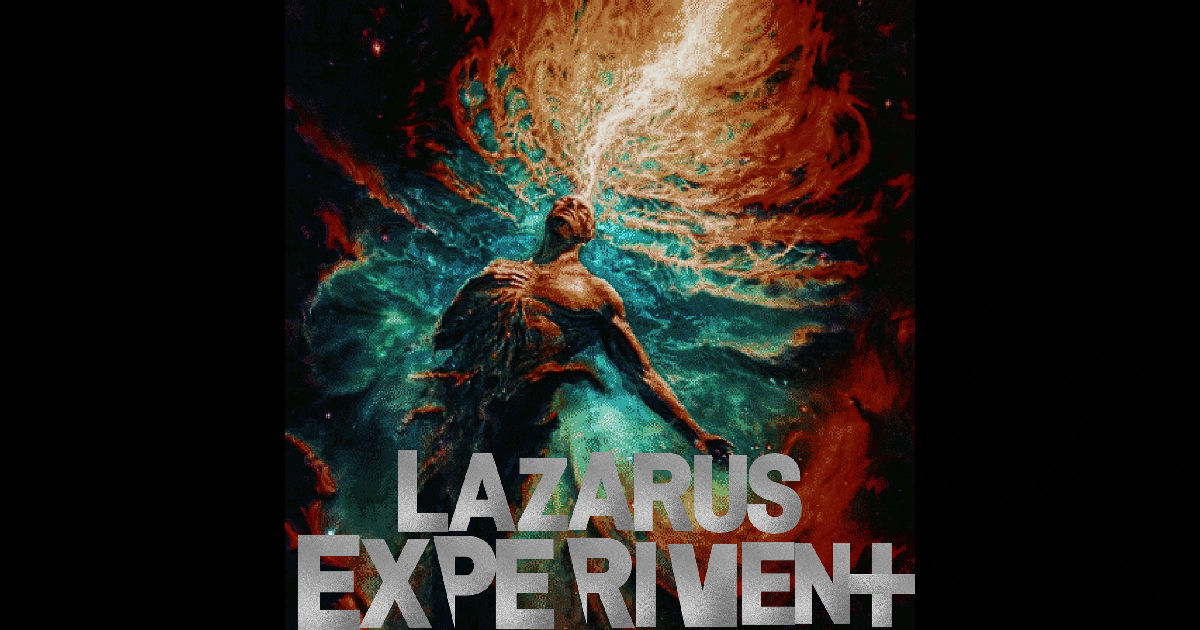 Well hot damn, I think I just found my new anthem for the rest of the summer at least!

J.Asadi has got a record coming out soon, it’s called Lazarus Experiment…just so happens I got myself a few of these cuts in advance on the down-low…so I’m gonna help blow the lid off what’s coming at you when he decides to let this record loose into the world.  Be ready, you’re gonna love it.

Of the four singles I’ve got in review here…there’s one that stands-out head & shoulders above the rest…we’ll get to that in a minute homies, be patient, be patient.  As far as the other three go – I’ve got no concerns…J.Asadi sounds determined, focused, and right on-point from what I’ve heard – there’s every reason to be excited about the upcoming record from what I can hear on these advance cuts.

I got no idea as to what the official order of these cuts will be when the album officially drops, but if you’ve ever run a 4X100 relay race in your lifetime, you’ll catch on to how I’ve got these assembled into the order I think they hold up most in.  If you haven’t, well, sorry…guess you’re shit outta luck…maybe I should have picked a better analogy…but still, learn to keep up.

Sprinting out of the gate, “Never Fall” comes out hittin’ HARD…like, you get your ears invested in this emcee INSTANTLY – because he’s straight-up electrifying on the mic.  Whether you examine this cut for the personal tale & lyrics he lets loose or the undeniable swagger & rhythm that this dude puts into his performance, he’s NAILING it here.  Best way to go about doin’ that homies?  It’s always by putting as much of the true YOU into the music you’re making – and that’s exactly what J.Asadi is doin’ here.  Talk about keeping it REAL…J.Asadi has more than manned-up here, he’s pretty much laying it all on the line and spittin’ hot bars of genuine TRUTH, for better or worse.  He’s gonna ‘keep on reppin’ – you feel me?  But if anything, it sounds like he’s ultimately reppin’ honesty on the m-i-c…he’s unafraid to dig into the dark and gritty parts of his past, he’s courageous and confident enough now to change the game of his LIFE up entirely…you can hear that genuine determination in every word he spits.  And ultimately, that’s probably what I’ve lovin’ most about “Never Fall” – he NEVER lets the focus drop for even a millisecond.  Not only does he essentially tell you the tale about the struggles of the hustle and his daily grind, but he raps this out like it’s truly that make or break moment in time for him – and MAN does he sound IN CHARGE of it ALL.  Ain’t no question that he’s lived through some shit and survived it when you hear the details in the words of “Never Fall” – but most importantly, the ultimate part of this entire story is right there on the mic and flowing flawlessly through the speakers…he’s lived THROUGH it all and come out of it with his head on straight on the other side of it all.  Now it’s all about making this next chapter count…and everything you’ll hear on “Never Fall” is all the proof you’ll need to know there isn’t anything that’s gonna stop or slow him down while he corrects course in life and sets the record straight officially.

Best thing I can say about “SKy’s The Limit” is that I think he’s out-written himself from verse to chorus.  Sometimes that happens – first off, ain’t nothing wrong with that, secondly, the hooks still work – I think they’re definitely memorable and accessible for sure, I’m just saying that this guy really rocks a set of sixteens with true grit is all.  I really dig listening to his words and the clarity of thought AND sound that come with’em…definitely nothing wrong with the hooks on “SKy’s The Limit” – I’d be willing to bet for many people out there, that’ll be their favorite part of this cut and I wouldn’t hold that choice against them at all, I just like what I like and this cat’s got a way with his words that really hits the mark for me.  Dig the way he sets this cut up…those chorus hooks really do come out swinging for the fence and really are memorable, so don’t get me wrong, it was a good move to start this track out with’em.  BUT – c’mon now…LISTEN to the confident precision, pace, flow, tone, attitude…it’s ALL there in the verse AND you get another killer cut that puts you into the mindset of where J.Asadi is coming from and what he’s all about today.  He goes into his wins, doesn’t shy away from his losses, he clearly gets the fact that everything he’s been through is a part of the man he’s become today.  If tracks like “SKy’s The Limit” are any indication, he’s gonna be just fine when it comes to this new chapter in life – he sounds like a fuckin BOSS on this cut.

“Undefeated (Pardon Me)” offers a glimpse into the man on the mic unlike any other – lyrically and musically, it’s an extremely strong & genuinely moving track.  J.Asadi opens-up big-time here; he’s unafraid to be vulnerable and explain his side of the story as best he can; he’s clearly made mistakes, he’s clearly also had a lot come his way that probably shouldn’t have in terms of troubles in life.  “Undefeated (Pardon Me)” takes on religion in a few different ways – but the one I identified with the most was him pointing out the hypocrisy in how religious-type people can often be the first to judge others.  He makes a ton of valid & insightful points along the way as he details his story, and he’ll take you into the struggle of growing up, family, relationships and his own kid…none of which is easy to hear, but recognize that it sure as hell wouldn’t be easy to LIVE this life either.  It’s a powerful listening experience, no doubt about it – and again, largely that comes down to the fact that J.Asadi’s got the courage to spit these words in the first place, but now that he is, he’s also spittin’em correct with all the right energy and emotion behind them required to make an impact.  Personally I really dig this cut…I think the music is absolutely awesome and a perfect complement to the vibe of the lyrics & vice-versa – it’s a solid match of atmosphere and thought-provoking storytelling at its finest.  I don’t think anyone out there would turn this down or turn it off…that just wouldn’t make no damn sense – but I can understand that the heavy content and crushing details of this tale would probably make this particular cut a bit less accessible than the other three by comparison…but this is definitely the kind of strong idea and stunning execution that holds up over time.  It’s a fearless tune really…I respect writing like this.  Plus I like, REALLY dig the final forty-seconds or so…I think that final switch to a unique singing hook and the sound of the vocals at this point on the cut was a really smart move and made for a highly memorable ending that makes you want a heck of a lot more of it.  You’ll hear those vocals backing him up throughout “Undefeated (Pardon Me)” – but during the end when you really get to hear them on their own, I thought it really brought what they add to the song right to the surface.  Then the next time you spin the track, you notice them everywhere…but to me, it was still those final moments that took what was a great experience already & put this cut right over the top to make that ending exceptional.

“Real recognize real.”  Damn straight homie.  And “Keep Rolling” is as real as REAL can get.  This is that anthem I was talking about from the get go – the real anchor of this set of four that’s ready to bring this whole race home for the strong finish this effort deserves.  This…THIS…is straight-up WILD and as no-holds-barred as a performance can possibly be.  Lyrically, there’s just line after line that’ll straight drop your jaw either in complete amazement or a genuine ‘wait, whaaaaaat – did he just say what I think he said?’ – and yes, he probably DID.  There’s a ton of lines in this cut that’ll raise an eyebrow or two along the way – but recognize the BOOT STOMPING SOUND he’s rockin’ here – and consider where it starts out too!  It’s almost got a carnival-esque melody at the beginning…it’ll get mixed-in perfectly with the beat later on – but like, at the beginning, you’d have NO IDEA he’s about to go as LARGE as he ends up going on “Keep Rolling” – this is a freakin’ masterpiece as far as I’m concerned.  The grit in his tone in both the verse and chorus of this cut is beyond convincing…this is the sound of the artist in charge of his every move and in full control of his destiny, determined to make it happen.  And even though I can’t possibly ever hear barking dogs in a track and not think of DMX (c’mon, we’re all stuck in that trap aren’t we?) – I actually really like it here…it adds to the intensity and untamed beastliness of this entire vibe.  No joke homies – this cut is INTENSE once it kicks in and never lets up after it does…by the time it’s done, it’s one of those experiences where you genuinely realize you probably haven’t taken a single breath while you were on the edge of your seat listening to the gripping performance this emcee puts into “Keep Rolling.”  That’s determination and hunger on the mic…that’s confidence and conviction in the words…that’s an authentic belief that he CAN dominate the charts out there and really make his mark in the Rap game…that’s what you hear on “Keep Rolling” – and it’s totally justified as far as I can tell.  J.Asadi LIGHTS IT UP on these singles – I’m stoked to hear the rest of Lazarus Experiment.

Find out more about J.Asadi by visiting his official pages below!