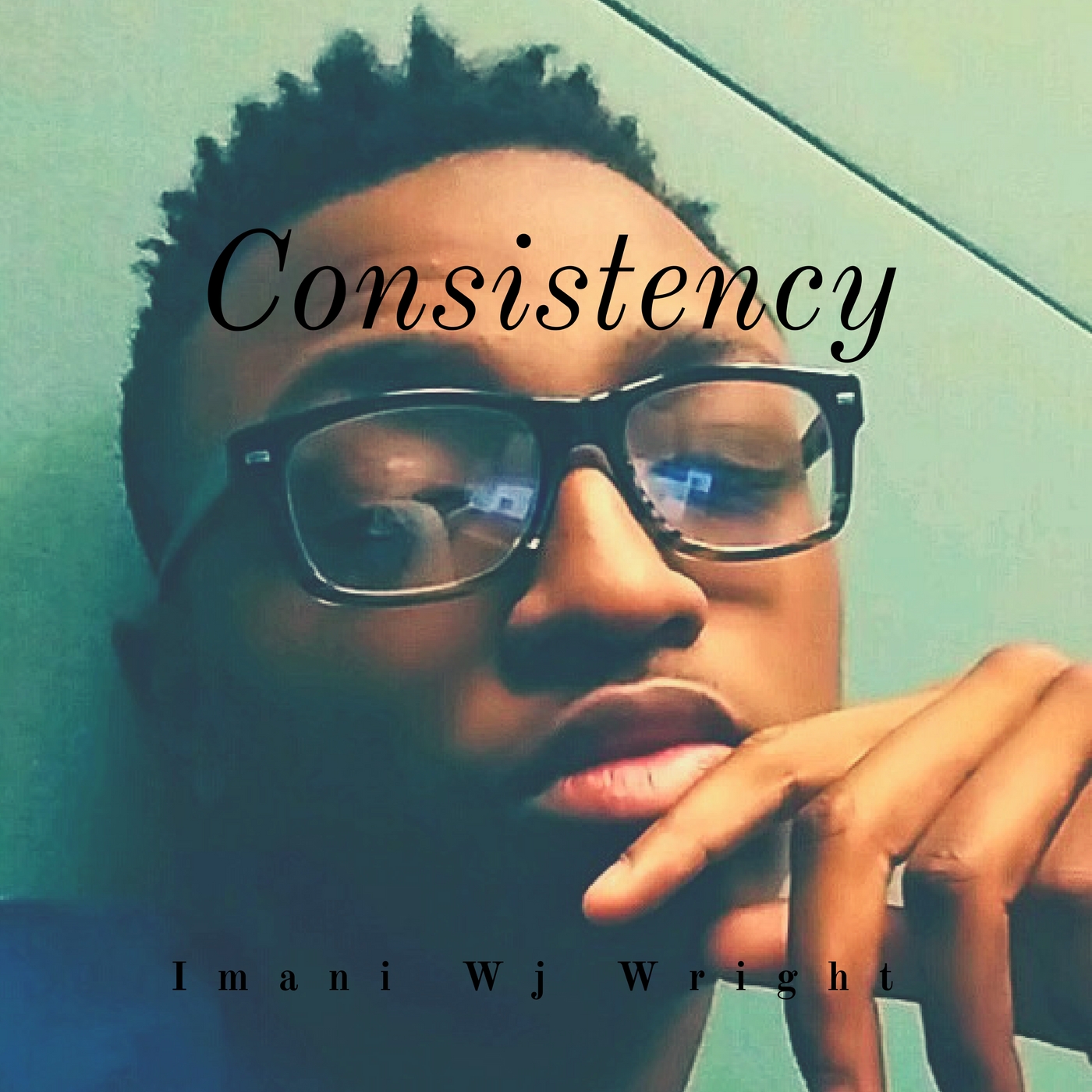 I’m gonna start this one out by saying a personal thank-you to Imani WJ Wright.  Not quite sure what it’s been lately…whether it’s been a couple of back-to-back experiences with horrific promoters, the summer heat or missing my wife while she’s out of town for work…but my blood pressure has been up over this past week.  I don’t have the stats on that…you’ll just have to trust me…I know when I’m not my normal chilled-out self.  As much as I might like my typical preferences for alternative/indie tunes or scattered electro stuff…well…neither of those genres are any kind of help in calming me down so much as they are generally perfect for keeping the rage burning strong.  I needed SOMETHING to help reset me back to my usual mindset where the music itself is all that matters – and that’s where Imani WJ Wright came along to save me from myself and prevent me from completely scorching the earth. 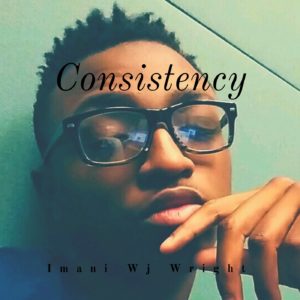 Because let me tell ya…when I listened to the chilled vibes he creates through his single “Consistency,” my pulse lowered to the equivalent of a frozen lizard’s would be.  Every damn problem I seemed to be dwelling on just magically dissipated into seemingly thin air like they were never even problems at all.  Life became chill again for a moment…and as a result…I really didn’t want to stop listening to Wright’s music…he’s got a great sound that sincerely connects, even to people outside of the R&B/Soul genres like I generally am myself.  But c’mon people…can YOU resist the bass-line groove & beat he’s working with here on “Consistency?”  No!  Or how about that saxophone lining the background and how smooth that sounds…what a perfect addition & he’s playing that LIVE on the track…you can’t resist that either can you?  No – neither could I.  The additional keyboards or sample-sounds in the mix – how about those?  Oh!  You say those are just as irresistible too eh?  Yep, I feel ya on that…and we still haven’t even gotten into what REALLY makes this track as magical as it is, which is the vocals.  Are they flawless?  Pretty damn close I’d say…but more importantly, you can absolutely hear the potential for a future SUPERSTAR here…not just a good artist, but a great one.  In Wright’s vocals, I can hear instincts like you’d find from the great purple Prince himself, in amongst a tremendously cool display of all-things R&B and genuinely honest performance that he puts into this cut.  The production on this tune still shows that he’s got room to improve when it comes to the technical-side…I can hear it peaking just slightly over the edge at times…but for the most part, I could honestly care less when the ideas, writing and performances are this spot-on.  According to the write-up at the Soundcloud page though – Imani is only EIGHTEEN years old and he’s got EXTENSIVE opera experience; he can take any criticisms I might have with a complete grain of salt…I should be seeking this guy out for what sounds good rather than the other way around – he is clearly already a recognized talent with scholarships and accolades racking up for his music on the constant.  But there was no doubt about the effect that “Consistency” had on both myself personally and the future of the day/week I was having – the ultra-smooth sound and incredible vocal-instincts that this artist has put me instantly at ease and chilled me right out perfectly. 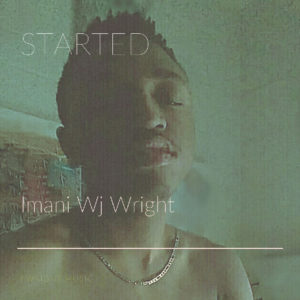 “Consistency” is also his most recently released single…which definitely shows that he’s heading in the right direction currently; now let’s check out where he was coming from through some of the singles from earlier on.  “Started” immediately confirms that this cat can certainly work with a bass-line groove; that sample is wonderfully hypnotic…and you really quickly become lost right into the sound of this one in the best of ways.  Detailing a romantic experience where it all “Started” with a kiss, Imani glides on a cushion of air through this performance…he keeps the words flowing, but loosely and in a highly stylistic way that is certain to grab your attention.  Can’t just be me and the better mood he’s put me into – this is great!  Maybe the very last couple lines of “Started” could have benefitted from a bit more power into the approach to get that tone right where he wants…but that’s a pretty minor observation at best.  Throughout the track, he’s got this one edited & structured to really hold you in the moment and really experience this through his perspective…the words come out poetically and freely…Imani’s highly-expressive in ways that are certain to catch your attention.  Again…this dude is only 18 years of age and his oldest single on his Soundcloud list is less than an entire year old…you gotta give someone like this credit for what he’s already accomplishing from the writing to the performance and certainly encourage a sound like this to continue on doing what it does.  Anything I’ve heard in the production that would need improvement would equate to adjusting like, what, two or three knobs or dials?  If he brings a couple levels downwards, he’s gonna be all set and ready to roll in every situation.  That’s hardly anything to complain about when the rest of what we’re hearing sounds so well put together.

Sometimes real talent out there can also be determined by knowing the strengths in your material.  Case in point…I’m here to review four songs…there’s five on his Soundcloud page…and the single “Make Me” was left off my list – for what I’d imagine are good reasons.  First being that he’s correct…of the five tunes available, if you were selecting four to send in, he’s absolutely identified the one that would have been a tougher sell…which is honestly rare for an artist to ‘get’ that about their own material.  “Make Me” isn’t a bad tune by any stretch…he runs into a bit more trouble production-wise and maybe lyrically takes this cut in a bit of a different direction by working more rhythmically within each line, especially in the hooks.  The result is a memorable flow…but the use of buzz-words runs the risk of eventually having this cut dated to the class of 2016/2017 – aka the years that for whatever reason, ‘wavy’ became a good idea to describe things in music.  Imani is more creative and imaginative than needing to rely on a popular phase or euphemism…so…even though I think it’s still a decent cut, I think he did the right thing in sending the other four over my way first.  I just happened to see this was there and decided to listen; bottom-line is that I think he’s clearly able to identify what really works best about his music – and those instincts are going to help him out big-time in the long run. 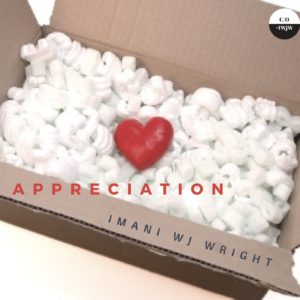 “Appreciation” was actually the first cut I took in from Imani…and still holds up as one of the most impressive I’ve heard from him.  I love the way he sings this particular cut…and the majority of where I felt like he’s showing instincts on how to sing it like someone like an artist like Prince would.  “Appreciation” is much more of a subtle-jazzy tune than anything from The Purple One…but Imani isn’t trying to be Prince, he’s just showing some of that same flash in how he sings.  “Appreciation” is a truly humble track…led by guitar at the beginning of the music and transitioning gorgeously into piano mid-tune – the music is extremely strong on this cut.  While there might be the absence of what people connect to in terms of traditional hooks – I think the stunning way this entire song sounds, moves and flows is much, much more powerful…and at the end of the day, it’s the kind of writing that lasts.  Years from now I could listen to “Appreciation” and I’m sure I’d feel exactly how I do about it now; there’s a timeless sound to his approach here that I think sounds inviting, welcoming and highly accessible.  It’s low-key & chilled in its overall vibe…and I think for a lot of listeners out there, you’d be surprised at just how much this track sneaks up on you; you’ll hear it, you’ll dig it…but the moment it’s gone, you’ll want to hear it again…and you’ll certainly remember it.  “Appreciation” has stunning ideas and execution. 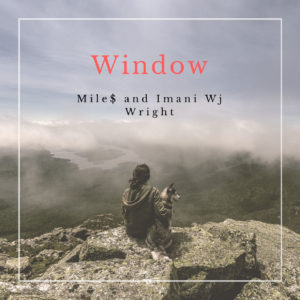 Not sure if this last cut is only him or not…pretty sure he’s got a guest-star on “Window,” the single that dates back the farthest in his catalog so far.  Credited to Mile$ and Imani WJ Wright – pretty sure you’ll be able to hear where Mile$ comes into the mix in the rap-verse.  Even Imani sounds like he’s sung this one in a lower-register at the beginning in the hook…at first I thought maybe he was only supplying the music here, but I’m pretty sure that the singing still belongs to him.  In any event, the hooks are strong, the song moves and flows sweetly…a bit more lo-fi than the others by comparison, which again shows the overall growth and evolution of Imani’s music from pole-to-pole when you hear the increased clarity in his newer material.  Mile$ sounds great though…that’s a good choice in collaboration by Wright that yields the results he’s looking for – great swag to the tone in Mile$’ vocals, solid personality on his verses and character on the mic.  Leaving Imani to work the hooks, which he does in his reliably unique style, approaching them with an energy that is really all his own.  It’s impressive to hear where he’s started and where he’s ended up through these singles…and just how starkly different it is from so much of what you’ll hear out there.  I can hear a real future for this guy…I think we’re just at the very beginnings of what could end up being a very exciting career for Imani WJ Wright…limitless potential in this guy and a genuine talent.  It’ll be interesting to follow this guy over the years to come…he could verifiably become a very, very big deal…the people that ‘get’ his style and sound are going to love it – and I’d be willing to bet on this guy to just get better and better and better – mark my words.

Find out more from his official page at Facebook:  https://www.facebook.com/ImaniWjWright/