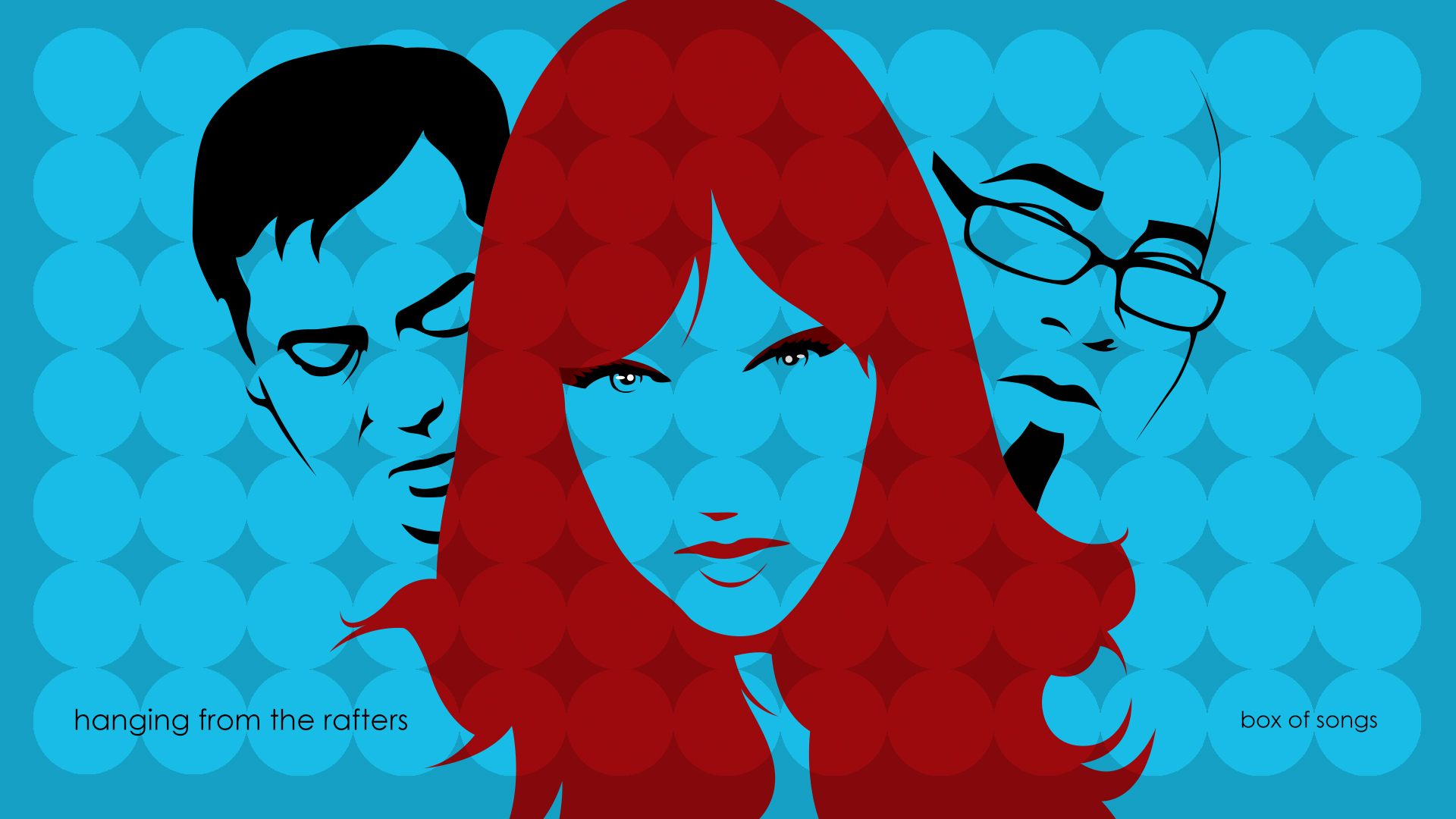 Hanging From The Rafters

Hanging From The Rafters – Box Of Songs – Album Review

An album is never old if it’s brand new to you!

Even though Box Of Songs was released last year – there are plenty of reasons why I want to talk to you about this album NOW. There is so much going for this band from San Diego that attention must be paid! From the mystically-atmospheric music they make, the fantastic way they represent themselves, to the genuinely great people they are…Hanging From The Rafters have all the right pieces of the musical-puzzle.

It has never been a secret as to which side of the fence I fall on in terms of independent music versus the mainstream. Not only do I have an incredible amount of respect for those of you out there making it all happen without a cushy management team, but nearly every experience I’ve had in the independent scene has taught me that the new generation of true-leaders in music out there flat-out don’t need it. Here’s proof…

Lolly Brown, lead vocals for Hanging From The Rafters is a perfect example of the unique voice & vision that music desperately needs, but ALSO the perfect example in how to communicate through both song AND general correspondence! By far one of the most astoundingly genuine souls I’ve come across through our project here – Lolly reached out direct to me personally to put this music into my ears. Extremely personable & completely approachable she certainly is – and best of all? She’s EXCITED about her music. I still maintain to this day – that’s the best possible first encounter you can ask for from my side of the screen; you should all be ecstatic about the music you make.

Somewhat unbeknownst to Lolly and her band…I’ve been listening to Box Of Songs whenever I can since initial contact was established between our two entities. Love that word. Entity. It implies, at least to me, something large in scale, living and growing…which is truly how I’d describe the music of Hanging From The Rafters. As much as I’ve personally enjoyed talking to Lolly – my quest for unbiased journalistic efforts in my writing always require me to “go dark” for a while…as I got more and more into the album…I communicated less and less. Some of you out there have already been through that with me.

When I get as excited as I am about an album like Box Of Songs…it becomes tremendously difficult to maintain that silence. What I want to do is phone Lolly directly and THANK HER personally for bringing this music my way at all hours of the day – that’s the consequence of me still being more of a music-fan than I’ll ever hope to be a professional…

But the straight-up from me on this particular album, is that I could listen to it repeating forever. Just absolutely HUGE in sound dynamic – Box Of Songs is both well-made and extremely well-mixed. The low-end on this album is absolutely crystal clear and pushes right to the edge every time it can, creating absolutely huge bass & drum sounds to go along with the other many instruments & sounds they lay sweetly overtop. “Heavens” midway through the album is a perfect example, not that they all wouldn’t be…but this track is so severely massive that it certainly warrants all seven-plus minutes of the attention it commands. But I’m getting ahead of myself already…like I said, I’m excited…

Box Of Songs opens with “Wait For Me,” which is beautiful combination of sweet electro and Lolly Brown’s intensely emotional vocals. I mean, WHAT an opener! This track was such an indication of the brilliant combinations of sounds to follow. Credit much of course to the other two thirds and technically original members of Hanging From The Rafters; Kawika providing the electro & guitars and Mike Brown – Lolly’s husband providing the percussion. These two…I mean…I can literally imagine sitting them in a room, leaving them alone for a couple hours and coming back to MASSIVE amounts of creativity.

Massive. Hmm. I like that word too…especially when it comes to music. I also like the band Massive Attack a border-line stalker’s amount…their music always moved and grew, expanded and changed…like a true musical entity. And here we have Hanging From The Rafters – who in so many ways remind me of all the best parts & atmosphere created at one time in Massive Attack, particularly the Protection and Mezzanine-era.

A few of you out there just woke up. Nice to see you again!

Mezzanine, is damn near the Holy Grail of music for its production, flow, songwriting and atmosphere. You don’t chuck that reference around without raising a few musical spirits. And high-hopes. Because there’s been a hole left behind in music through the sound on that album that people still yearn for. To you all, I say wait no longer – go get yourself a Box Of Songs. The entire album swells and flows with the same hypnotic power completely.

Taking it another step further – they clearly incorporate another of my personal favorites with many guitar tones from Kawika sounding like they’re coming direct from Robert Smith’s amp from The Cure. Listen to “Yesterday’s Dream” and you’ll hear it for sure; but the very combination of those beautifully-sad tones and the enveloping percussion, Lolly Brown’s jazz-meets-rock voice…it all leads to an overall incredible sound that is truly their own.

They more than prove they’re beyond the sum of their influences all throughout this album, demonstrated from the very pushing play and opening track “Wait For Me;” but as the album draws to a close, these last tracks show you a band fully expanded and creating completely new & beautiful musical territory. As it winds down with “If I Could,” Lolly Brown becomes self-reflective in what sounds like a very personal track & emotional tale. The guitars, again, perfect & beautifully played against the stadium-huge percussion…it’s such an incredibly effective and well-produced combination that as long as I know I’ve gone on here in this review – I know it’ll never feel like I expressed it ALL to you. It’s that good…I’m assuming you know that already now…cause I’m assuming you’re listening while reading this…

“I Am…” is a song worthy of a novel, not just this paragraph to follow…

This song…to me…represents the very best parts of music. If you’re listening to music…and you’re not FEELING something, or you’ve somehow NEVER felt something…you need to hear this song and understand what music can do to you physically when you hear something as powerful as this song is. I must’ve have heard this entire album somewhere in the neighborhood of forty/fifty times since receiving it only a month or so ago…and I STILL GET CHILLS every single time this song comes on. The incredible atmosphere created in this song, and truly this album, are second to none. I feel like I go on a complete journey with Hanging From The Rafters and step right into their world each time I press play, which incidentally is a practice I plan to continue here through the speakers of our studio for a long, long time to come. This is music made by a band with an incredible future, making music you can truly experience physically & emotionally. This is music you can believe in.

Tags: Album Box Of Songs Hanging From The Rafters sleepingbagstudios