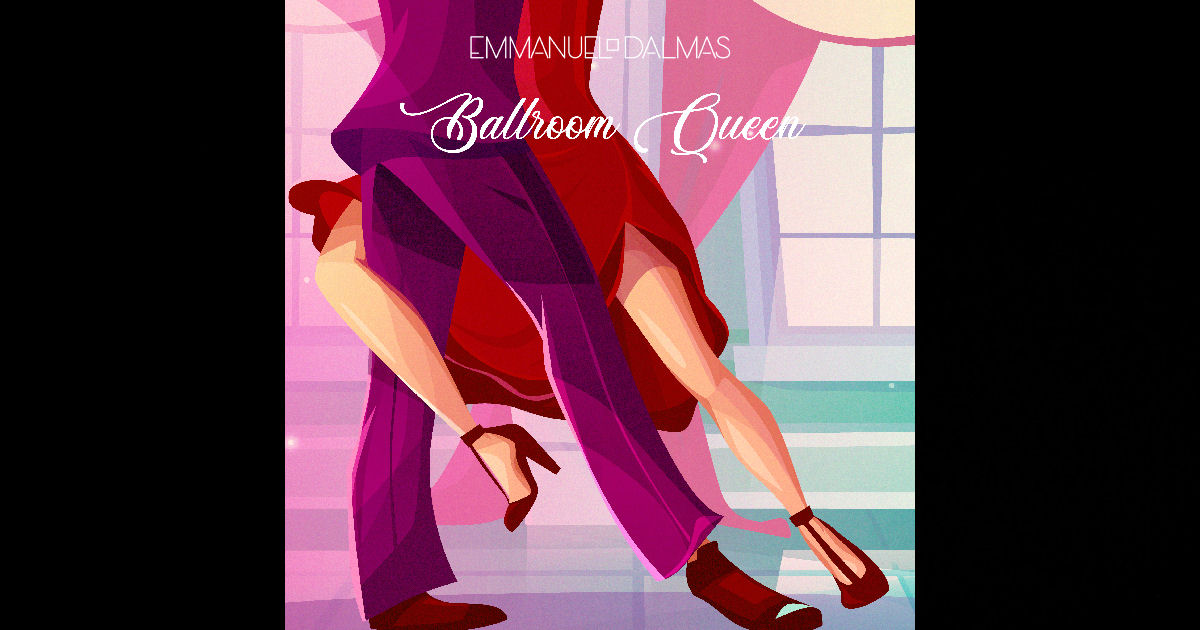 Sometimes I have to give my head a shake & realize it was actually only just last year that we first heard the versatile music of Emmanuel Dalmas…considering that we published about eight or so reviews on his songs throughout the year to follow!  Almost seems odd that we’ve yet to have him on our pages here in 2019 yet…but that certainly doesn’t mean he’s slowed down his relentless enthusiasm & pace I’m sure.  Somewhere over there behind the scenes, Emmanuel Dalmas is ALWAYS making music of some kind, I assure you; test the theory out for yourself by going outside right now, cupping your hand to your ear, & listen to the sound drifting in on the wind…I’m tellin’ ya, that’s Emmanuel you’re hearing.

As always, it’s like freakin’ Christmas when this guy shows up on our playlists, every time – these songs might never come wrapped up with a bow attached, but you never know what’s going to be inside what he’s giving ya.  I’ve always been a big fan of how Emmanuel is so willing to experiment with his style & sound…mind you, with the skillset he has & the impressive ear for music he uses, it’s hardly an ‘experiment’ of any kind when he’s ready to push record.  It’s much more of a comment speaking on behalf of how limitless he’s been when it comes to style, sound, or genre…you never know what you’ll find when you’re pushing play on a song by Emmanuel Dalmas & it’s one of the best things about listening to whatever he’s come up with next.  So let’s do that!

I’ll admit, I’ve got three tunes here to review, and I totally got stuck in a loop listening to the first one for a very, very long period of time – it’s called “Ballroom Queen,” and it’s audible perfection, through & through.  For all of two-minutes & ten-seconds, it’s probably best I don’t reveal how many minutes or even hours I might have ended up spending listening to this one song on repeat…you’d figure I had all the time in the world if I was to divulge the actual amount I’m sure.  And I don’t, so I won’t.  Suffice it to say, I’ve enjoyed every single drop of the expressive melody Emmanuel’s written & performed to tightly here – it’s a genuinely captivating listen from it’s smooth & subtle opening, to the cinematic & colorful climb, absolutely perfect beat, and impressive mix throughout…there’s no going wrong with this tune.  Best way I can put it is, I’ve already pointed out that I’ve heard, listened to, and experienced many songs & singles from Emmanuel Dalmas, and I’d be more than happy to proclaim that the gentle nature & stunning melody he’s got goin’ on in “Ballroom Queen” should be at the top of the list in his catalog for many people out there.  The way “Ballroom Queen” unfolds with such remarkable sound & emotion building throughout its two-minute-plus timespan again proves just how much of a grip & mastery that Dalmas has when it comes to making music…when he’s at his best, you feel that melody right in your heart & soul, just like you do on this first single of the set I’ve got here – “Ballroom Queen” is beautiful.

So…yeah…probably best I explain that, I’d eventually go on to listen to these other two cuts probably just about as much…and then like, a whole bunch of other random tunes from Emmanuel too, just because.  Not exactly sure what they’ve got in the water over there where Emmanuel is living, but I’ll take a glass or two m’self – this guy has some extraordinarily impressive tunes in this set of songs, “I Am Love” is another highlight example of Dalmas doing what he does so well.  Blending atmosphere, texture, and pretty much space & time along with it when it comes to this tune, Emmanuel uses space & pace to his advantage & ends up thriving in a genuinely crossover sound where classical-meets-EDM.  Violin is exceptional…so is the overall structure, editing, production – all that & more…not only does “I Am Love” have an exquisite sound & boldly artistic design to it, but you have to admire how loaded it is with twists & turns, yet still feels like it’s built on solid ground & hooks aplenty the entire time.  That’s because sound selection…choices made…they matter; when you’re focused and you’re making sure every moment contributes to the core of the song, idea, and theme…it sounds like “I Am Love.”  While it might be subtle at times, make no mistake, it’s a highly adventurous tune with a lot of stunning qualities on display throughout…downright orchestral at times, and on its way into the club at others like around 2:50…from the vocal samples & the spectacular edit on them to the impressive beats laced-in…Dalmas has created a relentlessly entertaining cut here that keeps you captivated through genuinely interesting combinations of sound & something new happening continuously along this awesome audio adventure.  I think “I Am Love” is a highly ambitious composition that would in most cases, be somewhat of a tall order for the everyday listener – but in my opinion, the compelling way that Emmanuel creates these hauntingly melodic & expressive layers of sound ends up resulting in an experience that’ll break through all the normal rules, constraints, and hang-ups people might have, because this is straight-up engaging.

Personally, while I wouldn’t go as far as to say I loved “Western Riders (Original Motion Picture Soundtrack)” as much in terms of comparison to my own taste & what’s been offered through the first couple tracks – ultimately, I have no less love for this final single in the set.  I mean…this is where you kinda have to be inclined to take a peek behind the curtain of the Wizard of Oz here and consider it from his side…Emmanuel knows full-well that some people will/won’t like/love whatever it is he comes up with ALL the time, because he literally tries SO MANY different things, which is 100% awesome btw.  So as a result though…if you’re looking at this song through the lens of its creator – how could you not admire how well he’s conquered the Spaghetti Western style sound here…even updated it a lil’ bit I’d reckon!  You see what I’m saying?  Personal taste aside, whether you want to make a Spaghetti Western style song your summer anthem or not, you gotta dig that when Emmanuel commits to an idea, he goes after it with every bit as much passion & professionalism as any of his other tunes.  The heart & effort this guy puts into his material continually shines through his work, and “Western Riders (Original Motion Picture Soundtrack)” has just as much of that in the mix as “I Am Love” & “Ballroom Queen” have for ya.  We all like what we like…the point is, the quality is 100% getting truly consistent with Emmanuel’s music and you can really hear everything evolving in his catalog as time keeps ticking.  I think the quaint & pleasant stroll through the sound of “Western Riders (Original Motion Picture Soundtrack)” has plenty of charm & appeal to it…again, another highly interesting combination of textures in the mix…and beyond all that technical good-stuff & adjectives describing it…this tune is actually a lot of fun as well.  And at the end of the day, I’d argue that aspect of Emmanuel’s music might always be the most genuine & strong connection you’ll hear…that he’s truly having fun, just as much as seeking to entertain the people out there.  It’s key to why his songs continually come out so excellent to experience, because it’s like we’re right there & in on the joy & adventure he’s undertaking in making such a variety of songs in so many genres, sounds, & styles.  It’s endlessly admirable, and equally inspiring – I’m always excited to hear what Emmanuel Dalmas has got goin’ on and he certainly did not disappoint with ANY of these three tunes…every one of them turned out great, and all for their own separate, audibly spectacular reasons.  Well done (once again) my brother.

Listen to more music by Emmanuel Dalmas at his page at Bandcamp here:  https://emmanueldalmas.com