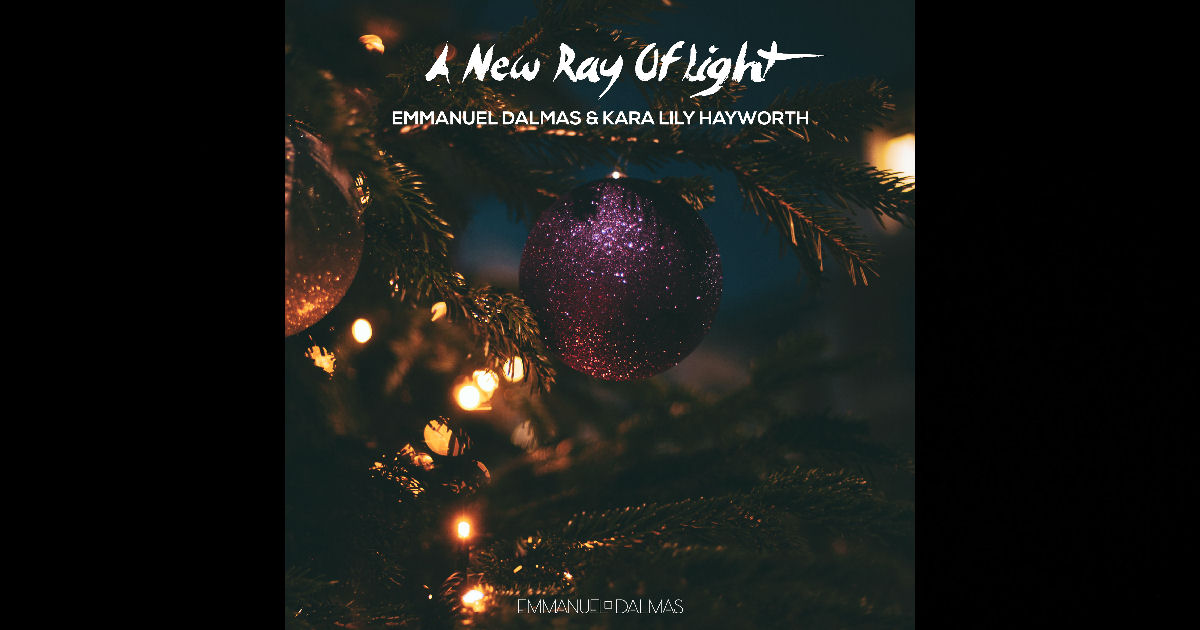 Well that’s impressive and I’d have to assume that’s a record, this will be the eighth time I’ve written about the music of Emmanuel Dalmas – this year!  Even if that’s all been in the form of singles that we’ve reviewed here at the pages, that still speaks to an incredible amount of effort put into music throughout 2018 for this artist and a whole lot of different sounds & styles to go with it.  As I’ve mentioned many times (probably seven others roughly I’m guessing) – you never know what you’ll get when it comes to the music of Emmanuel Dalmas, he’s always coming up with something new from the last time around.  I know there’s a Christmas-based tune in here though…gonna have to do my best not to Grinch-out on him given that it is finally Christmas Eve…& to all of you out there, Merry Christmas.

In terms of anything Christmas-inspired, “A New Ray Of Light” has just about every advantage I can think of compared to the rest out there.  For one thing, the Christmassey-part of this song is an interpretive one at the most…appropriate for the holidays in that sense that it has a classic & majestic sound to it, but the holiday inspiration isn’t exploited at all, which obviously I like a lot.  The majority of my issues with Christmas-based music simply comes down to not wanting to hear the same ten songs done just ever so slightly differently than the last time I heard them over & over – but if you want to add to the catalog of songs with something unique, I’m still all for it, just like with any genre or style.  So Emmanuel Dalmas plays this one smart by staying on the fringe, giving the composition a beautiful & frosty, crystalline sound with his piano & string combo…and then of course, there’s the guest vocals from Kara Lily Hayworth, who undeniably shines gorgeously & gracefully throughout the entire song.  She’s got a Celine Dion like sound…not the giant notes, but the control and beautiful lower-tones – and she’s an exceptional fit for something like “A New Ray Of Light.”  She shows wonderful technique and a great understanding of the movement & flow of the melody in this song, bringing out even more heart & passion to the overall sentiment & ambition of this uplifting tune through a powerful performance.  Everything moves in the right direction for Emmanuel & Kara on “A New Ray Of Light” – and a positively beautiful one at that…together they’ve created an exquisite gem of a single here; I love the drama and emotion in the way Kara sings and I felt like the music from Emmanuel was spot-on beautiful, full-stop.

I had to do a double-take for a second and adjust to the next tune as “The Answer” started, revealing the powerfully soulful vocals of singer Tyra Juliette as the guest star of this song – she’s got an entirely different sound & style from where the experience of this set of tunes began with Kara’s vocals.  And personally, I dig that very much…the collaborative spirit in Emmanuel Dalmas is just about the strongest of any artist I can think of – and it’s awesome that he can find such diversity in style and consistency in talent.  Essentially, Tyra doesn’t do what Kara does and vice-versa…so having both of them in this one set of singles brings something decidedly unique to each song, both noteworthy performances of their own design.  Tyra’s got a beautiful swagger and style of singing that absolutely connects straight to our soul – I felt like in the end results, same thing as Kara, you couldn’t ask for more from either of these two fantastic voices when it comes to what they’ve given to these songs in their respective performances.  What speaks to Emmanuel’s talent in particular is the smart selection of who belongs where and in finding the right voices to bring these songs to the potential they have in the writing & sound, which he’s certainly pulled off here in both Tyra and Kara.  “The Answer” needed that soulfully sweet & smooth R&B touch when it came to the vocals, and Tyra delivers; I think she starts off strong and gains tremendous strength & even sweeter tones as the song plays on.  Musically, it’s aces – I love the subtle additions you’ll find in the atmosphere, like how around the 2:30 mark, it’ll brighten-up even more – but facts are facts, “The Answer” starts out beautiful and it’ll remain that way, with perhaps the exception of becoming beautifully-bold at the most intense parts of the melody.  But hey, we’re still talking beautiful in all-forms and splitting hairs now, you feel me?  Really well done all-around; I felt like there were seriously breathtaking moments in both the music & vocals of “The Answer” – together Tyra and Emmanuel really manage to bring the emotion & soul of this stunning tune straight to the surface.  Love that surge into the hooks right before the three-minute mark…the energy & vibe are remarkably uplifting and it’s certainly a memorable moment and highlight you’ll still notice, even with everything else surrounding it coming through so powerfully beautiful and flawless in design & execution as well.

Man.  I just went touring through all the old Emmanuel Dalmas reviews to see if I had in fact reviewed or listened to “Father (Indian Version)” in the past and what a mess I’ve discovered lol.  That’s the thing about those postings up there on those internet pages…something moves and the rest of everything connected to it disappears – I’ve got a sea of broken links in there brother!  All of which will probably be fixed by the time this even gets published or shortly after…so it’s kind of an irrelevant point I’m making – but one you always want to be aware of as an artist/band out there moving your stuff around as well.  Anyhow!  Back to the song, which I was fairly sure I had heard before anyhow…it was further back in March this year from our past reviews.  “Father” was a whole other deal, with a violin in the lead at one time before this new version that features an Indian Bansuri flute, Sitar, and Tabla in the mix to give the composition a whole other dimension of sound now.  I think the percussion is brilliantly hypnotic, mesmerizing, and captivating in a way you’ll truly get lost right within and want to stay listening, drifting off in your thoughts while the flute overtop adds melody into the mix for ya.  I loved that I felt like “Father (Indian Version)” was able to retain my attention so strongly while being such a chilled-out composition…I mean, it’s not like this song is fighting to get your ears on it, know what I mean?  It just happens organically & naturally through the interesting blend of textures & tones, the insightful rhythm of the drums, and the journey of the melody being created in the atmosphere floating through the air.

“How?” is one minute long and exactly what the brackets next to the title will clue you into, it reads: “(Silly music with a message ?)” – and that’s completely true; his words, not mine, but I agree.  I also happen to love me the occasional ‘silly’ song, and I get what he means here…it’s not like “How?” has demanded even a tenth of the normal amount of attention & detail he’s put into his other material or any of the collaborations he’s inspired, I get that.  BUT – not only is Emmanuel Dalmas having a bit of extra fun on this tune, he IS correct, he’s putting a valid message out there through the video supporting this tiny track and mixed humor & insight really well.  You’ll see visual-stills onscreen that depict some of the grim realities of our world, the kind so bad you’ll question “How?” it is we let these things become a part of our existence, interfere with our lives, or in many cases, let them go on even still to this very day.  And then he’s got it all threaded with humorous imagines of a lady who clearly ‘just can’t right now’ when it comes to all these scenarios onscreen from garbage at the beach to all out nuclear explosions – like he said, it’s silly in the playful sense of the world with its bouncy electro-based sound – but there’s also no doubt that he’s making many valid points onscreen that are clearly socially aware & forward thinking.  Definitely one of the stranger tunes you’ll find in his catalog – but oddly satisfying too!

Find out more about the music of Emmanuel Dalmas by visiting his official page at Soundcloud here:  https://soundcloud.com/user-875694817