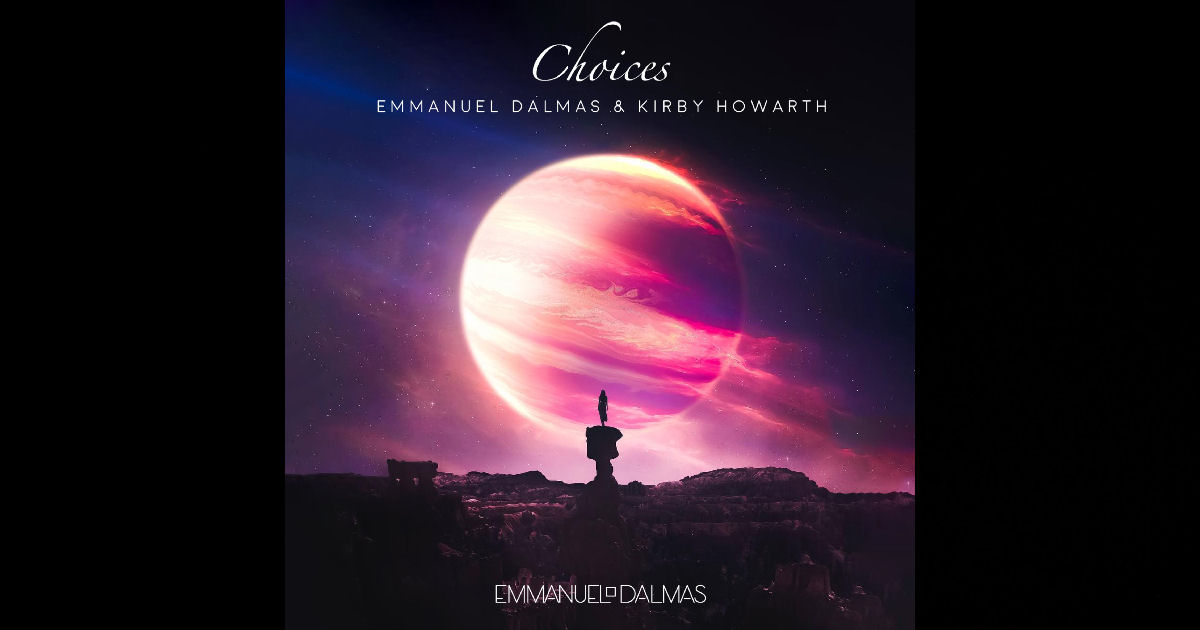 Always a pleasurable mixed-bag of music from Emmanuel Dalmas – you never know what you’ll find!  This will be the sixth set of tunes we’ve reviewed from the man behind the music this year – you gotta admire that level of dedication to the art!  We’ve got four new tracks from the maestro in the mix today here in review – let’s check out what he’s up to this time and see what our speakers have to reveal…

The response to “Shoot Me To The Stars” featuring Gabriela Flores has obviously been pretty damn good so far…it’s only been out about a month or so and it’s got tens of thousands of spins already on Soundcloud.  At the risk of going against the grain here, I’m gonna have to call this one as I hear it – the people are nuts here.  There are…hmm…things about “Shoot Me To The Stars” that undeniably work…but there are arguably more than a few things working at odds with this particular cut.  Am I surprised by the hit-count?  Not necessarily, I can understand what the appeal would be for the people out there when it comes to this song and it’s upbeat energy that comes thumping through the pulse & hooks of the chorus – and believe me, there’s not much that could be done to escape the memorable pattern they create.  That being said, it’s that aggressive Pop hook so saturated with an intentional hook as opposed to one that would sound more organic that gives this song an extra plastic feel to its glossy results.  Essentially, for each person that’s going to love these hooks, I’d be willing to be there’s a match on the other side of the fence that isn’t quite sure about’em at all.  Flores has some real highlight moments but also makes a few questionable decisions along the way as well either with her tone or where she chooses to accent the punch on a word like ‘the’ instead of the more potent words in the lyrics.  For me personally, I’m probably alright with the verse of this cut more than the chorus here – there’s not a doubt in my mind that we’re treading real close to what a modern-day ABBA would end up sounding like on “Shoot Me To The Stars” – which would be a tough thing for me to fully support based on…pretty much everything I’ve ever written here at sleepingbagstudios…but objectively, the quality is still there and I’m comfortable in acknowledging that.  Would a modern-day ABBA be a good thing for a TON of you out there?  I have zero doubt about that – like I said, a lot of people out there will love what’s up on this track from beginning to end; for me personally, it actually became a lot more about the editing and production Dalmas has put into the wildest electro-inspired moments of “Shoot Me To The Stars” like around when the chorus exits and Emmanuel continues to mix Gabriela’s vocals along with the beat.  The work has been put in as always, that part’s undeniable…there’s a lot of character in these aggressively-Pop hooks and wild imagination in the EDM-inspired music that back up the vocals.

Those that regularly follow and listen to the music of Emmanuel Dalmas are likely ready for a song like “She’s Like Wildfire” that leans towards an artistic & intellectual design.  For the rest out there that aren’t familiar with his music yet, it might take an adjustment on your behalf to get past these aspects; there can be the occasional choice made in the words or the mix that can snap you out of staying with every twist & transition of an ambitious tune like this.  Lyrically, I think the words in the verse are excellent & loaded with brilliant imagery…chorus-wise, I could probably take it or leave it…sometimes I appreciated the way it broadened the story in this song, but it was another tough fit in the sense that it feels like that thought pursued or theme created rather than one that’s experienced.  Which, I mean, in the twisted tale of love that’s told on “She’s Like Wildfire,” it’s probably a good thing to some extent that it’s likely not based on real events, but as listeners, we want to believe it is no matter how good or bad.  Where redemption comes for this particular track and why I like it more than “Shoot Me To The Stars” is pretty much everything to do with Gabriela Flores, who proves she’s the exceptional talent we know she’s capable of being with her inspired performance on the vocals of “She’s Like Wildfire.”  I think you get a hint of what she can do on that first tune, but she holds absolutely nothing back on this second cut and to me, it made all the difference in the world.  So like, even spots where I maybe wasn’t in love with the lyrics or word-choices in the chorus, the reason I’d still be more than willing to listen is because she’s really making the most of every moment & minute she’s on the microphone in this song.  Right off the drop, she sounds fantastic with her bold whispery vocals in the opening verse – and LISTEN to how magnificent the backing vocals are that come in soon to join her; as IF things could somehow continue to get better from there, Gabriela STILL manages to raise the stakes on “She’s Like Wildfire” with the brilliantly powerful way she sings the pre-chorus of this song.  Mix-wise, she remains a bold presence from the beginning to the end…and while it might seem like nit-picking to some, I know firsthand that Emmanuel Dalmas loves details and any insight that can be given to him on what we hear – and in my opinion, I probably would have gone bigger with the music in the chorus, because he’s seriously got some killer stuff that kind of ends up perhaps more in the background of what we hear than we should.  At the end of the day, I think the pre-chorus of “She’s Like Wildfire” and the way Gabriela crushes it so hard steals the show of this song…and that ultimately it’s a moment powerful enough to gain more than an enthusiastic thumbs-up towards this ambitious combination of ideas as one overall.

Of this particular set of four, I’m probably most in favor of the instrumental in the set, even though I think Gabriela does an incredible job on “She’s Like Wildfire” and Kirby Howarth will lend a noteworthy performance to “Choices” in a moment or two here…but in between them, I found “Love In Paris.”  A humble effort that sounds gorgeously relaxed, sincere, and locked blissfully into this beautiful moment in time, “Love In Paris” draws on subtle orchestral sounds and an expressive & exploratory lead-guitar playing overtop.  A solid reminder that sometimes our emotions, thoughts, and feelings can be even better communicated without using a word at all; this quaint melody hits home in the sweetest of ways and satisfies that spot in your soul that craves music that genuinely connects.  Wonderfully played, Emmanuel seems to really know where he wants to go with each moment of this song, but it all comes out with such an impressive progression & naturally soothing feel to the melody & flow, like it came straight from the heart and into his guitar strings.  The warm glow of the music surrounding the guitar all complements the vibe perfectly or sets the mood entirely; but it’s that stunning, simple, & sweet guitar that you really connect with on “Love In Paris.”  Mix-wise it’s right on the money, the drums keep it controlled and add just the right amount of an inventive beat that’s still noticeable but non-invasive – and I think both the way he opens “Love In Paris” and ends it are also worth a shout-out of their own, because he’s really found a way to capture our attention immediately and give this song the final moment of beauty it deserved.  Loved every second of this tune…truly gorgeous composition Dalmas.

He’s done well on the final track “Choices” featuring Kirby Howarth on the vocals.  Chances are, if you had to pin people down for what genre a track like this ends up finding itself in, it’s gonna be considered Adult Contemporary or even Easy Listening – either category of which, is a hard one to find victory in.  That’s where Kirby comes in to lend a solid assist with his bold emotional tones being so well suited for the music composed here by Emmanuel…there needed to be a matching sincerity shared between them in order for a song like this to work and not become part of the endless string of cheesy parodies that the aforementioned genres can quite often provide.  Howarth brings a classic style & sound to “Choices” that really fits…dude’s got great pace and you can hear him summon that extra power required for his biggest moments, or listen just as intently as he dials back the energy when best suited for the song.  As to how that all comes about, whether that’s his own instincts, direction from Dalmas, or a combination of both, whatever the recipe may be, they’ve cooked up the desired results here.  “Choices” is beautiful & smooth at times, dramatic & theatrical at others – and ultimately, the balance between these gears is flawless…I’ve got no complaints here personally.  I think anything that drifts towards Adult Contemporary or Easy Listening has the odds stacked against it by comparison to the other genres out there that dominate the modern-day charts – but make no mistake dear readers, dear friends – radio ain’t everything, not even close.  Songs like “Choices” end up with more opportunities for placement out there than you’d ever believe, but that’s the truth; whether or not that puts this tune in the dentist’s office or the elevator might be another story, but even still – the point is that there are a million places a song like this can exist where others can’t.  Excellent “Choices” being made in the sound of the drums and percussion you’ll find on this song…great ideas there for sure and an excellent mix on them; completely noticeable when they’re present and whenever they go away, they leave the spotlight there to shine on Kirby’s vocals.  The guitar in this song nearly sounds like a Sitar at times, the piano is as stunning & gorgeous as we’ve come to expect, know, and love from Emmanuel’s music, and Kirby certainly brings in a top-notch performance that’s brilliantly focused on revealing the depth of the emotion in the melody & lyricism for all to hear – there are a lot of great aspects of “Choices” and reasons as to why it works so well.  At its core, Howarth puts in a truly captivating performance that brings the tale told in the words right to the surface in a powerful way that we can appreciate the poetic way the lyrics are written just as much as the way Kirby sings them.  Part ballroom dance, part melodrama – “Choices” has a mesmerizing & unique sound & structure that keeps your attention in-full.

Find out more about the music of Emmanuel Dalmas by visiting his channel at YouTube here:  https://www.youtube.com/channel/UCScp8WHDJOiTu7Qru1LHcBA