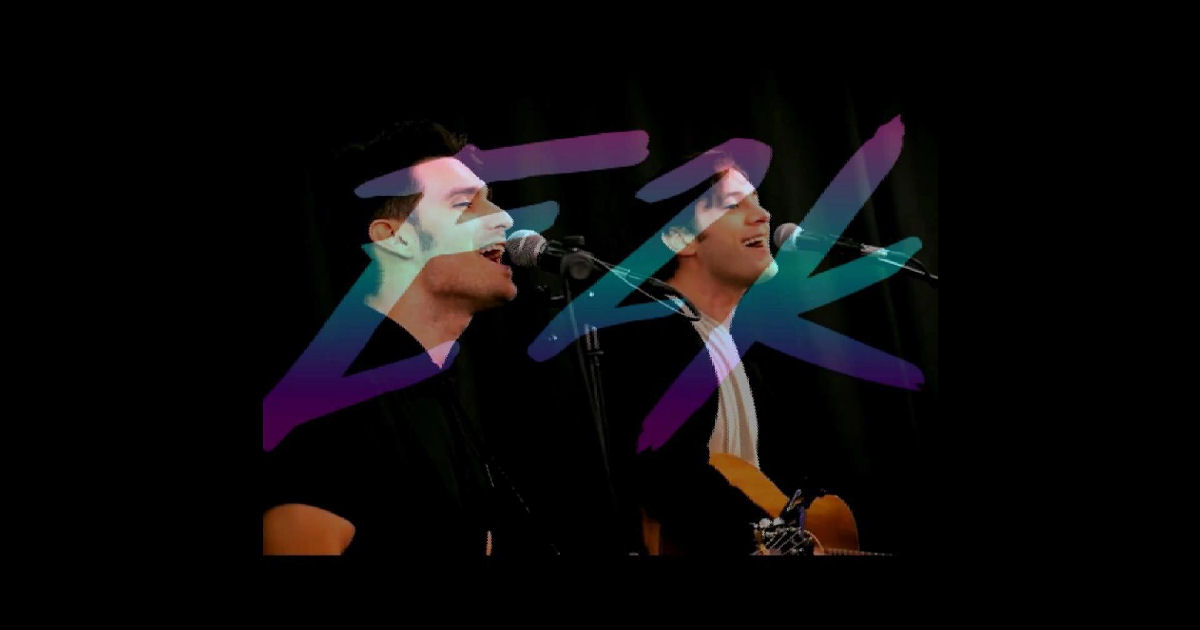 Early Two Thousands, I wish you both all the very best of luck here…you’re fighting incredible odds stacked against you when it comes to my own personal taste with this new set of singles/videos posted to YouTube…which are…all…*gulp…covers of Blink 182 tunes.  I have admitted many times on these pages that I am…not exactly a fan of the original band…to put it as nicely as I can…for now.

So there’s that.  But as I’ve also written onto these pages many times, a fresh perspective is always welcome in my world…I’m interested to hear how these punked-up tunes translate into the acoustic style of Early Two Thousands and what that’ll end up sounding like.  On the bright-side, the pressure’s off their shoulders as far as the songwriting is concerned…safe to say you can already infer how I feel about all that from this rambling intro.  I’ll cut to the chase – let’s check these out & see how they do!

Right off the bat, I think there’s an additional name in the mix here today that needs a serious shout-out for their hard work & efforts, because what we see onscreen, the way it moves, the way it’s filmed and edited, plays a massive role in experiencing these covers from Early Two Thousands.  That person, as far as I can research, is Liz Sim of Parkway Media…I think she’s done an exceptional job on every one of these videos that show the duo playing live in Burbank for what is promoted as the first of a four part series.  She’s really caught what I’d assume to be the genuine personality of these two onscreen…as a result, there’s a level and degree of honesty that exists between the harmonies and shimmery acoustic-pop spin they’ve put on these hits from Blink 182 that really works in favor of the music…and just how quickly it seems like you want to root & cheer for the guys in Early Two Thousands.  Give her a high-five gentlemen or buy her a beer in celebration…she’s done an incredible job on these and deserves some real props.  I mean, right from the promo credits at the beginning to the fade in to the plucked melody of “What’s My Age Again” & beyond, you can tell Liz has the talent & eye that it takes to film live music in that special way that makes us want to continue watching – and now it’s up to E2K to keep us listening.

Lead vocals from Chad have a ton of personality & the backing vocals from Risi on “What’s My Age Again?” add in a gorgeous tone that supports Chad really well.  They play the song as perfectly as you’d hope to see in an acoustic live setting…for me, it’s spots like around the 1:30-mark that I felt like we get a moment of what these guys bring to the music…that moment specifically and the way the tackled the final run through of the chorus.  It’s those slight transitions where Chad is able to hand off the main hooks to Risi to carry them on while he loosens up the vibe and allows his vocals to soar with more freedom as they take this song to the end, adding in significantly more doses of that pure acoustic melody into their version of one of Blink 182’s biggest hits.  Does it work overall?  I have no massive issues with it…for a live performance I think they’ve done exceptionally well and I think that you can still visibly see and hear enough of what makes Early Two Thousands entertaining to get a glimpse beyond the cover-song aspect and understand what these guys are really all about when it comes to music.

Credit to the set-up & recording as well – you really notice how clean all this comes out sounding on a track like “Dumpweed” where the loud-quiet dynamics of the music & chops on the guitars are more pronounced…everything ends up sounding immaculately smooth, which is also just as much credit to the two players, Chad & Risi, that have a real professional level of confidence and control when they play these tunes.  AND…to top it all off, they look like they’re genuinely having FUN!  I’ll fully admit, the vibe they put into “Dumpweed” caught me quickly; great feel, touch & tone in the guitars, great lead vocals from Risi and Chad seems to be just as effective in a supporting role when they switch it up for this second tune.  I mean, if we’re being completely honest here, you really can’t go wrong with either of these two – you can tell from the tone of their vocals that they’ve got what it takes to pull off a Blink 182 track in a way that’ll retain its essence and original sound, and it’s through the music itself that you get more of that sense of it being their own.  Put an electric guitar in either of these two guys’ hands and you’d have a perfect recreation of a Blink 182 song…a complete carbon copy…again, not saying that’d be a bad thing – just a comment on how close they can get to the vocal tones and melodies of the originals.  Of the four singles/videos from E2K, I ended up being kinda partial to “Dumpweed” – I think I felt like I wasn’t expecting this one to be so adaptable, but when you listen to how they’ve approached it, I can’t deny how well that works.  Almost comes out with a more like…Third Eye Blind kind of sound here.

“Dammit” was likely my first experience with any Blink 182 song…and due to nostalgia & all that, I’ve still got a bit of love for this tune.  Early Two Thousands have also convinced me with what we see from them as they perform these tunes, that they’d likely be an incredible amount of fun to see live at a full show.  It felt like this was a track they both knew inside & out, resulting in flawless timing and golden harmonies that highlight the strengths between them as a single unit.  Risi sings & plays the lead on “Dammit” while Chad supplies the harmonies and rhythm…overall I’d say this performance likely represents a lot of the best of what you’ll find in these four tunes from the music to the vocals.  The most noticeable switches that Early Two Thousands make to “Dammit” occur in the chorus, where there’s a bit more license to change-up a few notes and sing it their own way.  That verse is what it is, it’s a static rhythm that needs its cadence to be what it is – and they pull it off perfectly as you’d expect by now after watching the first two songs, but it’s the way they approach and perform the chorus that allows the real heart of the band to come shining through even more.  To be fully truthful, this is definitely my favorite of the originals they’ve chosen to cover – but I don’t want that to take anything away from the solid performance they’ve put into “Dammit,” they brightened-up the beauty in this one.

Props to Liz Sim one more time!  Watch the opening for “All The Small Things” and the way she catches Chad singing the first verse and you’ll totally get it – she’s got the eye man!  Props to Chad too…you can tell it definitely ain’t like he isn’t aware that camera is there – the man leans right into his performance on this one and gives you just as much to watch as there is to listen to while he’s on the mic.  LISTEN to those harmonies though in the pre-chorus…like c’mon…you see what I’m saying?  These two could be dead-ringers for the vocals in Blink 182…that’s the exact sound right there!  I think it definitely says a lot about the genuine respect for the band and their material for Early Two Thousands to perform an entire set of their songs to begin with, but it’s songs like “All The Small Things” that audibly give you the real clues as to just how deep those roots truly go.  Another track that felt like they knew inside & out, “All The Small Things” has an excellent breakdown moment around the two-minute mark, and if anything, maybe could have come back with a bit more energy to those final chorus run-throughs of this particular cut…but truthfully, I’m not really complaining…it’s just a slight observation that can really only be made in comparison to the rest of the songs…that’s the only reason I felt it was noticeable here.  Might have been the end of the set…it’s not like they’re dragging or anything, it just felt like that would naturally be where they’d take it up another notch like they did earlier with the ending of “What’s My Age Again?”  Still a good cover…you’d be hard-pressed to feel like any of these missed the mark of their intentions, all four of these songs look & sound great.

As to what they’re all about though…in the long-run that is…it’s harder to say what’s up with Early Two Thousands from checking these cover songs out.  They might be onto something with their duo-acoustic approach to big giant hits from massive acts like Blink 182…they might branch out to other artists/bands and make that their thing…and they COULD do it…because at the core of it all, they’ve displayed all the talent and ability to do so, right there in front of you in all four of their cover tunes.  They could do it.

And in the process…could potentially be lost amongst a sea of YouTubers out there that all want to put their own cover songs out as well.  Regardless of how good or great any of them may/may-not be, the sheer number that are already out there stack the odds against these tunes getting the play they deserve for the efforts they’ve put in.  With all the talent that these two clearly possess…not gonna lie, I’m looking forward to what they’ll come up with in their own original tunes in the future…because there’s a lot of genuine personality onscreen that you can see…the more that translates & drips into their music, style and sound, I think the more success they’re going to find.  As an introduction to Early Two Thousands…I can let it slide…it’s a good-spirited & fun way to check them out for the very first time – but I highly suspect that with the way these two interact & play together…that the best is yet to come.

Find out more (eventually I hope?) at their official page at:  http://www.earlytwothousands.com 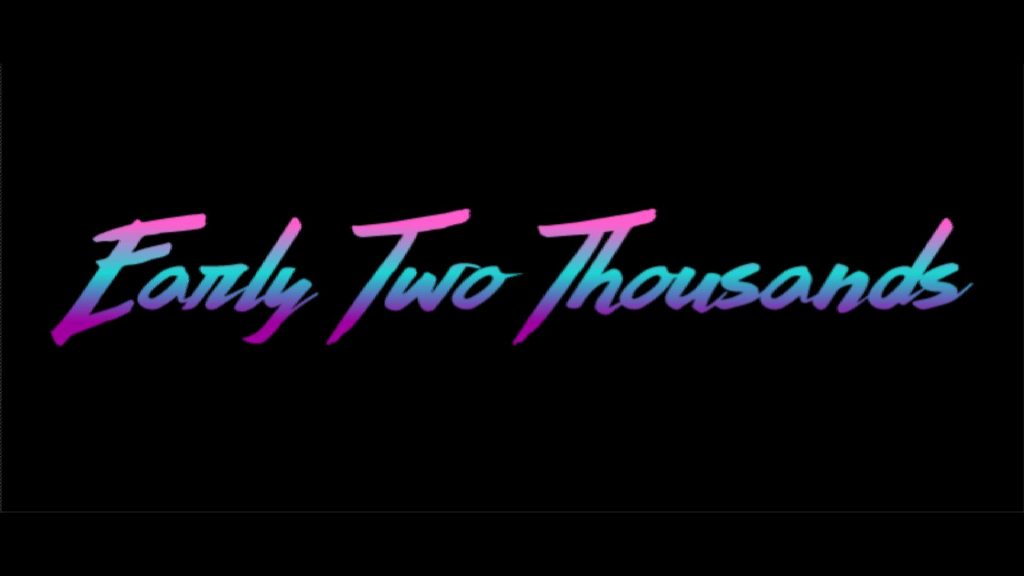