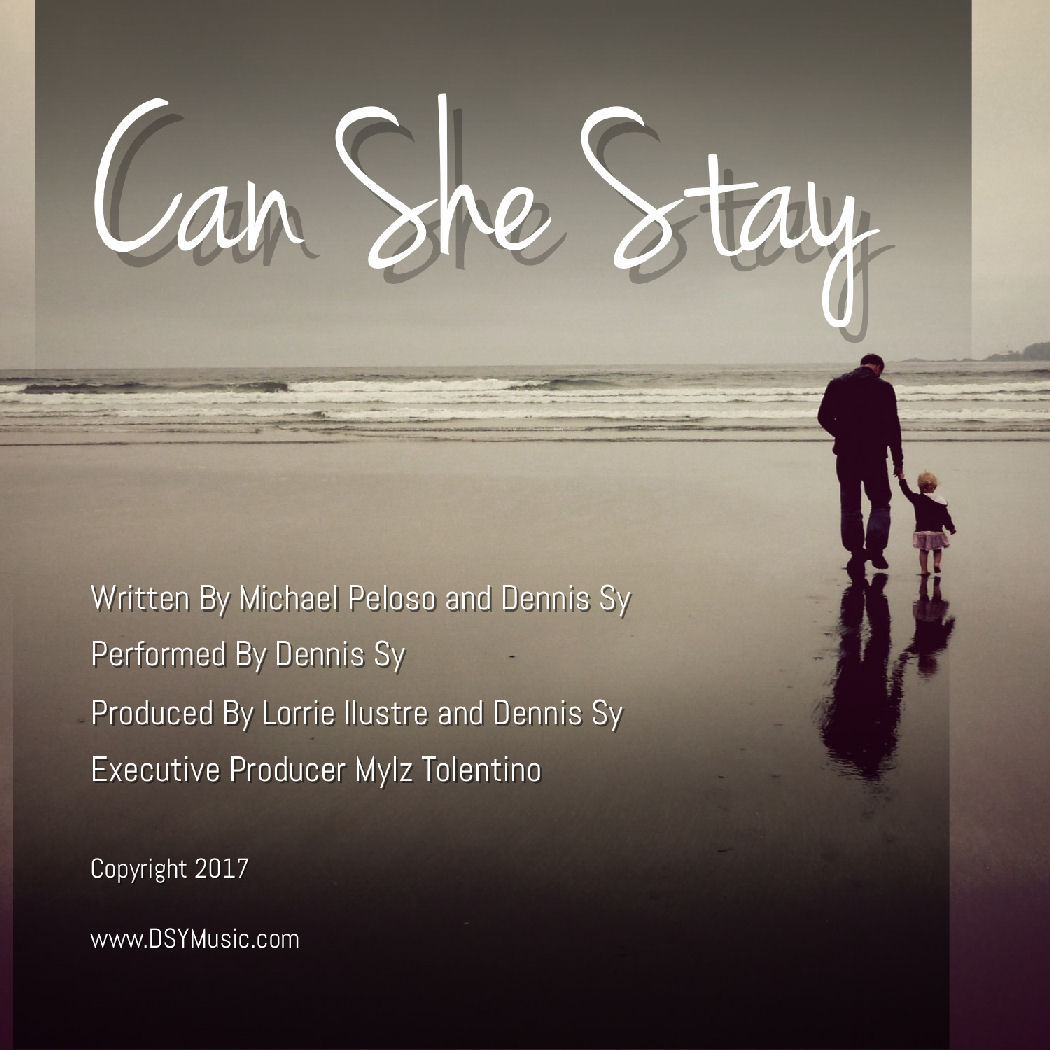 One day…I tell ya…there’s going to be a father that chooses to either walk his daughter officially down the aisle to this song or set this melody as the background to the traditional father-daughter dance…and very shortly after that, singer/songwriter Dennis Sy is going to have to answer for an entire flood of tears.  The latest single from Sy called “Can She Stay” with lyrics co-written by Michael Peloso is definitely another highlight display of the true craft of songwriting, full of emotion expressed through the beautiful perspective of a father learning to let his daughter grow up, despite his reservations.

The music is a complementary aspect to this particular song, in my opinion.  The piano is always delicate, tender and endearing in its gentle sound, which supports the lyrics of “Can She Stay” and the way that Dennis approaches the vocals to make those words become a real experience to our listening ears.  The saxophone that comes into Sy’s new single just past the three-minute mark adds strength to the atmosphere – but no elements in this song dare step into the spotlight shining so brightly on the lyrics and vocals in this melody.  Dennis alternates between steady & strong tones when the lyrics possess confidence in nostalgic reflection, and a more dramatic & emotional sound when the feelings swell and become overpowering for the father in the storyline of the narrative running through “Can She Stay”  Admittedly the song is a bit more towards the light-ballad side of the musical-universe and appeals to those people looking for the more tender & sincere sounds out there…but when you examine “Can She Stay” as an idea in terms of its own realization and completeness…I think this effort would potentially be admired by anyone.  While the sound of this new Sy single might have more of a niche audience, essentially, everyone can find something to appreciate about an idea presented so comprehensively.  The way Dennis sings this song is an equally strong complementary assist to the words, writing, and structure of “Can She Stay” – which really does speak volumes about the quality in the overall results.

But we’ve come to expect quality from Dennis.  Ever since reviewing his music for the first time, we’ve definitely been able to hear his skills on display and the potential for where his style of songwriting can fit into the world.  The dramatic storyline that fills the narrative of “Can She Stay” is a perfect example of Sy at his best…along with Peloso…create a vivid & clear story that can either exist beautifully on its own as it currently is, or even potentially add massive strength to visuals in a show or movie that run along similar threads of emotion to give the onscreen story more power in the moment.  That kind of storyteller’s gift is a real part of the magic of this particular single from Sy, and definitely every indication of an artist that’s sharply focused & dedicated completely to the craft of songwriting.  No reason not to be proud of an effort like this…doesn’t matter whether or not it is or isn’t people’s ‘thing’ – the fact remains that there is plenty of opportunities that exist out there for songs like this and styles like Sy’s.

The emotion is powerful, clear and insightfully well-woven into this tale, the imagery is clear and the story comes alive in a classic songwriter’s style.  There’s nearly a mix of Elton-meets-Disney anthem in here via songs like “Can You Feel The Love Tonight?” or “A Whole New World” – it’s got that same kind of inviting sound that can appeal to the great many people out there that enjoy a great ballad and a strong, identifiable tale that really has imagination & heart.  Like the best of stories – “Can She Stay” has a true beginning and conclusive ending to the storyline and characters that Sy is singing about.  Of course…the optimist in me would potentially argue that the ending of this song, lyrically-speaking…could definitely open the door to a whole new, beautiful chapter in the lives of both the father and daughter over the years to follow.  But that’s all a theory about their future I suppose…and I have no idea if they’re based on real people or if they’re fictional characters; but isn’t that kind of the point as well?  Sy makes the characters in this song’s story really come alive through the words and performance he puts into “Can She Stay” – job well done.

Find out more about Dennis Sy at his official website:  http://www.dsymusic.com/DSYMusic/Home.html