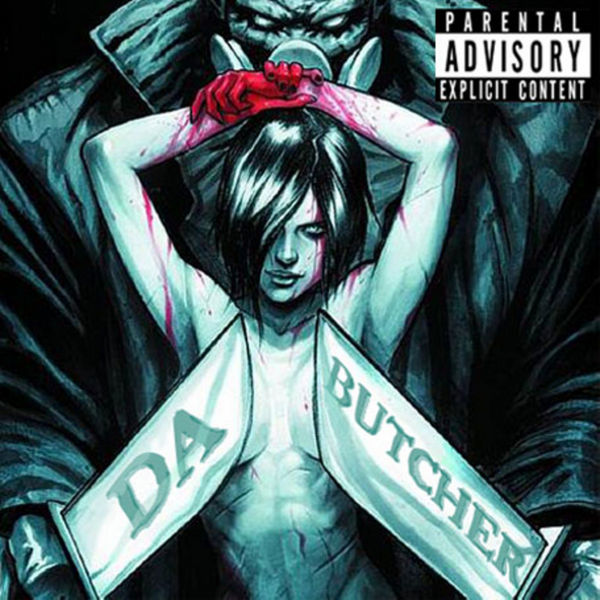 Just a taste! You’d think Da Butcher would have cut us off a little more than just an appetizer…a musical promo for his upcoming album being released soon…but here we are, still in line – cause you know we’ll take what we can get from this talented emcee!

What we do get to check out briefly, are samples from “Clouds (Skit)” and “Listen (Skit)” before getting a full dose of one of the three tracks on the upcoming album, “Action (War).” In complete honesty, it’s a little tough to know what we’re in for with the first two-samples coming from skits and not from the songs themselves…they could also be the entire skit that’s featured on the album…not quite sure. I’d assume that’s probably the case, in which case we really do get a chance to hear 3/5 of the tracks on the upcoming L.I.F.E. Before Da Storm album. Part of me is beginning to wonder if we’re supposed to have all 5 of these listed tracks as the sample…it could be the magic of the wonderful (sarcasm people) datpiff download system once again – but I’ve double-checked it from my end, so I’m assuming this is what we’ve got!

Ha! It IS datpiff…apologies on this intro and more-than-likely bizarre layout on this review – I just realized I could check out “Mash Up” and “Get By” from the Soundcloud page. I maintain…datpiff – you SUCK…I’m tired of you pulling this crap on us all! ‘Cause I’m tellin’ you all…it’s not just Da Butcher that’s been cut-up by that site…many people experience this there. Datpiff seems to feel like they’ve gotten the full uploads and confirms it when often they end up being rejected and zero-kilobyte files. Anyhow…Soundcloud to the rescue!

“Mash Up” is definitely what I was missing – Da Butcher puts the rhythm into the words right off the drop in a blazing set of quick-verses full of complex & tricky rhymes. Big chorus here with a ton of energy, the beat is exceptionally tight and combines fast-paced beats with guitars before switching to an old-school R&B vibe…great dynamics between these two sounds and Da Butcher flips between styles and sounds with the correct moves to make both atmospheres work together solidly. He’s not done – towards the fourth-minute, Da Butcher finds a third gear and lights up the mic in a highlight sample of his vocal-flow, abilities and natural talent on full-display & ripping this one up right to the end.

“Get By” features fellow homeboy Gada laying down backing vocals and verse in the second-cut. These two emcees find clever ways to work together and separately, taking turns on the mic and then combining their talents to trade off through the chorus. Gada starts the vocals out with a recognizably smooth & identifiable sound and after a chorus, hands over the mic to Da Butcher, who puts together an incredible performance and energy to his verse. Chorus-wise…it’s a little tougher…the energy moves backwards in comparison to the verse…as listeners we’re always prepared & ready for the opposite way around with a verse leading to a bigger chorus. It becomes a tougher sell I think when this is the case – but I also think that the performances put in by Gada and Da Butcher bypass our need for the regular and allow us to accept this assembly more readily than other songs in this situation.

On “Action (War)” – this is Da Butcher we know & love as he carves up a full-rack of vocabulary over a dramatic & exotic beat. Sampled string sounds and what sounds like a rhyme developed specifically for this promo…or at least the beginning. Chances are, this is a dynamic beat you can expect to hear on the upcoming record, just with the promo-shout cut out from the front & most likely a different intro. Da Butcher once again shows a mad lyrical prowess as he rips rhyme after rhyme into the mic like a general giving orders in front of the troops. He brings the life & the energy to “Action (War)” single-handedly over the mic through his confident approach, and the music is right there to support him. The backing vocals of the chorus are a little tougher…I get what they’re going for…you want that droning-soldiers-marching-counting-off-&-singing-like-MEN-do sound…and for the most part I think it comes out pretty solidly. A few dips in tone ride the edge of sounding bored rather than the soldier-sound…not enough to kill the idea by a long-shot but close enough to that edge to continually notice it when the chorus pops up – be careful yo!

That being said…the star of the show remains the star of the show…and though we’ve only been cut a small chunk off of Da Butcher’s block of tunes to come, he also continues to be a captivating emcee that is constantly looking to bring new beats & innovative new rhymes to the game – and you can hear that in “Action (War).” He’s still hungry as ever, his delivery is still completely on-point…and like any appetizer you can order from your favourite restaurant…you know the best part – the full meal – is just around the corner. This promo does a good job of starting up the hype and if these new tracks are any indication – it looks like Da Butcher will be bringing the beef BIG TIME with massive sounds and upfront, direct & complex, thought-provoking lyrics on this upcoming release. We’ll be ready!

Find him at Twitter direct at Da Butcher’s page: https://twitter.com/Da_Cleaver